Shmuel Moreh’s recollections of his childhood.

By KSENIA SVETLOVA
JUNE 18, 2010 19:35
Shmuel Moreh 311
(photo credit: KSENIA SVETLOVA )
Advertisement
Almost 70 years after the culmination of violent Arab hostilities against the Jewish minority in Iraq, the on-line memoirs of a Baghdad-born Israeli professor are finding resonance among Arab and Iraqi readers and evoking a discussion on what used to be the taboo subject of the 1941 pogrom against the Jews of Iraq.“The year 1941 was one of the most tragic years in the life of the Jews of Iraq,” wrote Hebrew University emeritus professor of Arabic literature Shmuel Moreh in the London-based and Saudi-funded on-line magazine Elaph. “It was a year of quick changes in the political, economic and social relations between Arabs (Muslim and Christian) on one hand and the Jews on the other,” continued Moreh, chairman of the Association of Jewish Academics from Iraq and recipient of the 1999 Israel Prize in Middle Eastern studies. “As a child who lived in the modern, aristocratic, mixed quarter of al-Batawin in Baghdad and a student at the Al-Sa’doon Exemplary School, established in 1937 as a government mixed school that was founded for children of the Iraqi royal family, ministers, high-ranking civil servants and army officers, judges and secretaries, I was a mirror of the government attitude toward the Jewish citizens in Iraq.”Moreh, who was born in 1932 and now lives in Mevaseret Zion with his wife, Kaarina, was one of three Jewish pupils who studied there among a majority of Muslim staff and pupils.“The Jews suffered daily harassment, insults and mockery. A few days after the defeat of the Iraqi army attacks against the British military bases in Habbaniya and Sin al-Dhubban, Jews were attacked in the streets, they were searched for espionage equipment and taken to police stations for questioning if they did not bribe the police. Their houses were marked as Jewish by anti-Jewish organizations,” wrote Moreh.“In April 1941, Faisal, the son of prime minister Rashid Ali al-Kailani, tried to blind the eyes of the writer of these lines by hitting him with a stick. This was a well-known punishment for Jews who dared to resist Muslims. Two months later, he was able to narrowly escape being lynched by Muslims and Christians at his school in revenge for the defeat of the Iraqi army.” Soon after these emotional words first appeared in Elaph, letters in Arabic started pouring in to Moreh’s private mailbox, along with hundreds of talkbacks on Elaph’s Web site that revealed how deeply touched the readers were. Some of the writers identified themselves as Iraqi academics, journalists, researchers. They wrote about their feelings of guilt and shame but also about nostalgia and the good old days. Despite the bitterness of the painful memories of the persecution and the eventual exodus, they urged Moreh to come back, stressing that Iraq is missing its Jews.“This story was written by an Iraqi Jew... It reveals his love for Baghdad, for the Tigris and Euphrates... No one can understand the pain of living as a foreigner, only those who have tasted it,” said one talkback.“I am so happy for all Iraqi Jews that they are finally getting to see their old country 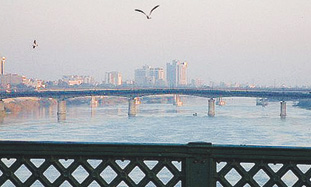 and getting to see Baghdad. I feel bad that Baghdad does not look as good as the way they left it, but the Jews will make something out of it if they go back. They are great people and very smart, and I admire them,” revealed another one.“Oh, the days of beautiful Baghdad, Baghdad of cultural tolerance and splendor, the days of music and theater... Where are the Iraqi Jews? Where are those days?” lamented the author of yet another talkback.IT’S NOT every day that the readers of a popular Arabic media outlet have a chance for a close and personal encounter with an Israeli, a Jew, who has mastered Arabic better than many native speakers and who knows by heart the traditions and the origins of the traditions that form the daily life in Muslim Arab society. In fact, the decision of the Elaph management to print the memoirs of Moreh – born Sami Muallem – was so unusual that it made waves in many academic circles throughout the Arab world, as well as in the mass media in Iraq and beyond.Some, mainly Palestinians, were furious, criticizing Elaph for the normalization of relations with Israel. But there were many others who relished Moreh’s beautiful and excruciatingly difficult Arabic, as well as his bittersweet memories of his childhood years in the posh Baghdad neighborhood of Al-Batawin.The extraordinary relationship between Moreh and one of the most popular Arabic Web sites did not begin smoothly. When 'Abd al-Kader al-Janabi, a literary editor whose poetry Moreh used to teach at university, first approached Moreh with a request for an interview about his years in Iraq, he refused.“He wrote to Nissim Rejwan, to Prof. Shimon Ballas and to myself asking for interviews. But I wasn’t interested. For me, Iraq is like an ex-spouse. Who would want to keep in touch with one’s former spouse? You just want to forget and move on,” Moreh says. However, following some persuasion by his doctoral student Samir al-Hajj, Moreh agreed to be interviewed by Elaph.“I told them many things – about my childhood, about my move to Israel and life here. I told them about my uncle who was the chief of police in a Baghdad police station and once met the king when he paid a visit to the station. He had the honor of lighting a match for the king, and he was so worried that the match would not burn well and could be interpreted as a bad omen for the new monarch, that he prayed in Hebrew to God that the match would burn,” he recounts.“I also revealed that upon coming to Israel in 1951, I joined the army and in order to make a few extra bucks on the side, I started to write poems in Arabic and managed to publish them in Histadrut magazines. I was so proud of myself, mostly because in Iraq nobody would let a 16-year-old publish poetry in grown-up magazines.” The interview in Elaph was published under the title “A soldier in the Israeli army writes Arabic poetry.” The interview was so powerful that the editor suggested publishing a series of his memoirs about life in Iraq. Moreh agreed. “I wanted to achieve three things by writing these memoirs,” he explains. “First of all, 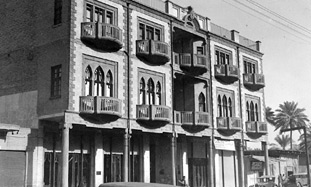 to remind the world of the persecution of Iraqi Jews. If anyone thinks that life was a paradise for us there, he could not be more mistaken. We were called names, harassed on a daily basis, and I lived through this hell during all of my childhood.“The second goal was to preserve the Jewish Iraqi dialect. Nowadays when I talk to Iraqis or write to them, many of them are astonished to be reminded of forgotten words their grandfathers once used. The Jews of Iraq kept the medieval Arabic, whereas the Muslims adopted the Saudi accent that was brought to Iraq by the Beduin who assimilated into the Iraqi populace.“And, of course, the most important thing was the memory,” Moreh says. “I wanted to perpetuate the memory of the Farhud and the tragedy that we lived through. Some people say that the exodus of the Iraqi Jews was sped up due to the acts of violence carried out by Jewish Zionist underground organization, but this is baseless. I studied the issue closely. Ever since the Farhud – the horrible Iraqi pogrom that took place in 1941 when angry crowds lashed out at the Jewish community, robbing, raping and killing thousands – we were always afraid that something like this might happen again. But even before that, the Iraqi Jews were always subjected to humiliations and threats, and that’s what I meant to emphasize in my memoirs. I believe that by publishing my memoirs in Elaph over a period of three years, I achieved this goal,” Moreh says.The Vidal Sassoon International Center for the Study of Anti-Semitism at the Hebrew University, and the Babylonian Jewry Heritage Center in Or-Yehuda
recently published Al-Farhud: The 1941 Pogrom in Iraq, a book containing a series of papers on the theme, edited by Moreh and Zvi Yehuda. The work is a revised English edition of the Hebrew version, which was originally published in 1992.“IN 1946 Jewish schools arranged an organized scout camp in northernIraq. My friend Maurice Haddad and I were ordered to raise the Iraqiflag at the entrance of the camp. I saluted the flag and start singingthe Iraqi anthem. I listened to Maurice sing and was horrified. He wascursing the flag, wishing it perdition. I was furious and tried to slaphim on the face for insulting ‘our flag.’ He started weeping andshouted back, ‘Do you call it our flag? They killed my father when hetried to save my sister and mother from being raped.’ He was sobbingand murmuring all night long, ‘They raped my mother and sister andkilled my father, and you tell me that this is our flag?’” Today, after the three years of recollecting memories both sweet andpainful, accepting and rejecting the past, writing, soul-searching andanswering questions, the memoirs of Sami Muallem of Baghdad havereached their target audience – Arab intellectuals, historians,journalists and others who are reluctant to write off the Jewishchapter in the long history of the Arab world. The memoirs werereprinted in hundreds of various Arabic Web sites around the globe andhave been read by hundreds of thousands of people. Moreh intends totranslate and publish his memoirs in English and Hebrew.The last chapter was published in Elaph in January2010. However, the close relations that developed between Moreh andmany of his readers continues to flourish. He is in touch with manyIraqi academics and journalists with whom he exchanges his views on thefuture of Iraqi Jews and their relationship with their old country. As chairman of the Israeli Association of Jewish Academics from Iraq,Moreh is deeply concerned about the state of Jewish holy sites in Iraqand often uses his connections to prevent the ancient graves of Jewishprophets from being destroyed or desecrated. And the yearning for the lost homeland is still there, despite allthese years. The grief and the longing mingle together in poetic verses in canonical classical and modern Arabic, mixed with proverbs in Muslim  Iraqi Arabic dialect.Last night, my mother visited me in my dream!
Asking anxiously: “Haven’t you visited Iraq yet?
Have you forgotten to kiss the mezuzot?
To visit the tombs of our prophets?”
I replied: “Mommy! Surely I miss Babylon!
But our home in Baghdad has been destroyed!
And the way back is so dangerous and far beyond!
Everything there is in ruins,
Even the glory of the exilarchs,
The sanctity of our prophets’ tombs
And the glory of Haroun al-Rashid the great!
Today, on every inch in Iraq there are graves,
The waters of the Tigris and the Euphrates
As in the time of the Tatars,
Are flowing with blood and tears!
The masts are destroyed and the sails are torn,
So how it is possible to set sail and return?
(The poem “Departure” was published by Shmuel Moreh in February 2007 in memory of journalist Daniel Pearl. ) With reporting by Jonah Mandel.
Advertisement
Subscribe for our daily newsletter