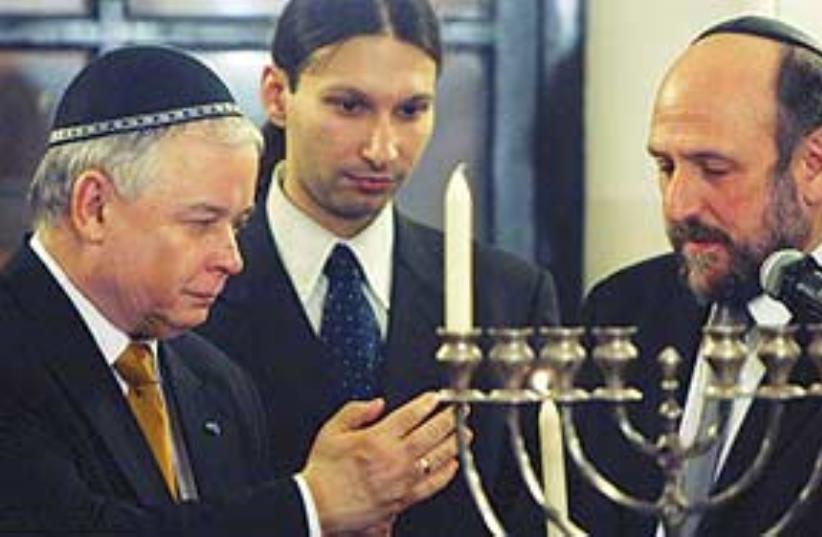 poland's chief rabbi
(photo credit: ap)
Advertisement
IT’S CUSTOMARY at national day celebrations hosted by the heads of foreign missions for a cabinet minister to bring greetings. Environmental Protection Minister Gilad Erdan was scheduled to attend the Czech National Day reception hosted by Ambassador Tomas Pojar, but had a pressing reason for backing out at almost the last minute.Failure to send a representative would have been a great embarrassment for the government, bearing in mind that some of the pilots who fought in the War of Independence received their training in the former Czechoslovakia, which also supplied Israel with arms.Government representation is arranged by the Foreign Ministry, which looked inward rather than outward, with the result that the Czechs ended up with two instead of one. The reception was attended by both Foreign Minister Avigdor Lieberman and Deputy Foreign Minister Danny Ayalon. Lieberman preferred to leave the talking to Ayalon, who recalled that both president Tomas Masaryk and his son, president Jan Masaryk, had been well disposed toward the creation of a Jewish state and both actively opposed anti-Semitism. Ayalon also recalled that Pojar’s father Milos Pojar had been the first Czech ambassador after the long 23-year hiatus, serving from 1990 to 1994.Tomas Pojar, who was still in his teens at the time, recalled that the family lived in the Czech Embassy in Tel Aviv. It was his father’s successor, Jiri Schneider, who purchased the house in Herzliya Pituah which is now the Czech residence. Pojar noted that it was the 92nd anniversary of the first republic of the former Czechoslovakia, which he described as “an island of democracy before World War II.” Israel, he said, has also learned to be an island of democracy in a hostile environment.He was proud of the fact that his father had hosted the first reception here of the free and democratic Czechoslovakia.■ ARGUABLY ONE of the most colorful, flamboyant and gregarious chiefs of protocol in the history of the Foreign Ministry, Yitzhak Eldan retired last week after a seven-year stint at the post and 41 years of commitment to the foreign service.Ministry veterans who came to bid him farewell last Thursday expected the usual reception, with a few nibbles and soft drinks, a little mingling and back to work. But instead they found the hall set up with tables and chairs, a lavish buffet prepared by the ministry’s in-house caterers, plus an amazing array of desserts which were a gift from the King David Hotel, whose deputy general manager Sheldon Ritz was one of several representatives of major hotels who joined diplomats and various other high ranking state employees in giving Eldan a VIP send-off.Eldan’s good friend, lyricist and former television host of This Is Your Life Amos Ettinger, told the story of the Casablanca-born adolescent, who with an older brother ran away from home because he wanted to serve the State of Israel. His parents and other siblings were most unhappy that he had left Morocco, but they missed him so much that after a year-and-a-half they decided to join him. They were given a tiny house with almost no facilities other than an outdoor toilet.Eldan, who had lived with a Polish family on a religious kibbutz, went to the army and was assigned to the Golani Brigade. Following his discharge, he put himself through university and joined the Foreign Ministry.