The search for springs and the enjoyment of them is a popular subculture of Israeli society.

By SETH J. FRANTZMAN
Spring in Ness Harim
(photo credit: SETH J. FRANTZMAN)
Advertisement
Eight-year-old Shoval leaves her father behind as she eagerly runs ahead to explore a hillside several kilometers from Ness Harim in the Judean Hills. Her father, a taxi driver from Rishon Lezion, spends every Saturday hiking with his family. Several weeks ago, with his wife at home sick, he took Shoval and their small dog Julie to the area around Ness Harim.They wander toward the ruins of Beit Itab. There, below the historic walls of the former Arab village, lies the spring Ein Hod. According to the Israel Nature and Parks Authority (INPA) this spring has a 40-meterlong tunnel which brings the water to an underground pool. In turn, the pool provides water pressure for a trough from which animals used to drink. The government restored the area in 2006. Like at all springs maintained by the INPA, the sign notes “drinking or swimming in the water is prohibited.”On that particular day 50 teens from a Gadna troop are busy sitting and flirting beneath the trees that dot the site. Shoval and her father pass the spring, traversing the ruins nearby, and then proceed down the hill to search out another spring, called Ein Sufla. It is here that I encounter them.According to amudanan.co.il, a website that provides maps and points of interest for hikers, the spring called Sufla is located under an old tree and is described as “seasonal” by other hikers, meaning it does not flow all the time. Despite the best efforts to locate it, the only thing I can find are several wild turtles, a few interesting birds and an old tree. No spring. Shoval, picking up and playing with one of the turtles, asks her father, “can we take it home?” The search for springs and the enjoyment of them is a popular subculture of Israeli society, one that is especially enjoyed on Independence Day and over the spring holidays.It bridges almost all social, religious and political gaps. Young haredim (ultra- Orthodox) go to springs, such as Lifta in the picturesque ruins beside Jerusalem, to use them as a mikve (ritual bath) and escape the cloister of their yeshiva world. Kibbutzniks and secular Israelis from all walks of life use the weekends in the spring and summer to hike the countryside in search of watering holes. For the national-religious, particularly in the West Bank, springs are an integral part of redeeming and loving the Land of Israel.For Arabs, springs near their villages have long served as places to socialize, relax and escape the conservative constraints of family life.For David Gal-Or and his son Liran, springs have provided a livelihood. Publishers of a popular series on hiking and walking, they wrote a series called 365 Springs (in Hebrew), which retails for NIS 190. Gal-Or explains that while Israel has always had springs, the culture of visiting them has only taken off in the last decade.“Only in the last five years did we see that books were being published, such as Springs on the Hill, a popular and much loved book about springs in the area of Jerusalem. Today there is so much information for people to use,” he writes. 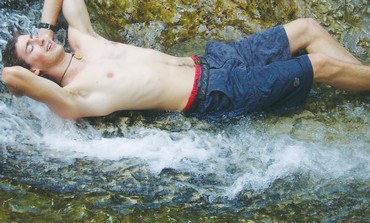 Gal-Or argues that visiting springs has become a “sexy,” in-thing to do, and understandable given the terrain of Israel. “When one journeys the country they want to be next to water, that is natural.”The springs are integral to the history of the human inhabitation of the country.Springs, he writes, were the source of the agriculture that took place in the hills, and settlements around the springs were quite developed. “If you look at Sataf [a spring and site near Ein Kerem], you can see that a pool was constructed for the water and then this was used to irrigate the terraces there.”Traditionally, the springs of the country are situated in the hills, and are particularly common in certain areas, such as around Jerusalem. Springs also exist in the valleys and plains of the country, such as around Beit She’an and in the Negev, but they are much less common. Because Ein Yorkam is one of the few large springs in the Negev it becomes immensely crowded during holidays like Passover.Claude Condor, a 19th-century British surveyor and traveler, chronicled how the springs played an integral role in the historic life of the country. At Latrun he recalled a spring which was “supposed to have healing virtues.” Near Nablus he met some Arabs who told him that “the long rivulets [here] are fed by no less than 80 springs.” He imagined that, “for 4,000 years the women have gone down to the same spring, quarreled, talked scandal and returned with their brown jars on their heads.”Life has changed but the quarreling in some cases has not. Near the Jewish community of Halamish in the West Bank lies the Arab village of Nabi Salih. Almost every Friday for the last year, villagers, along with their Israeli and international supporters, have led a protest march. Ostensibly the protest is about the seizure of the village’s lands by the Israeli establishment.Scott Campbell, an activist blogger, posted a video on March 25 on his site angrywhitekid.blogs.com purporting to show IDF soldiers blocking Palestinians from entering the spring by Nabi Salih. “While Israeli settlers freely visited the spring, the Israeli army and Border Police repeatedly blocked the inhabitants of Nabi Saleh and their supporters from reaching the spring, using force and threats of arrest,” he writes.However, when I went to visit the place with tour guide Avi Margolin, there was no evidence of conflict. The spring has been refurbished over the years, with picnic tables set up and palm fronds placed over the place to provide shade. The improvements were carried out by Jews. But the villagers say they are prevented from visiting the spring to which their village has an ancestral connection.Eitan Levy, a tall, skinny man with a wispy beard and large kippa, who made aliya from Colorado in 2006, remembers the times he has spent at springs around Bat Ayin in the West Bank. He never recalls there being a conflict. “We never ran into trouble with Arabs, but you definitely might think twice about going by yourself at night, but that is probably true of wandering around in open areas in general in the territories.”For Levy, the springs served as a rejuvenating experience. “I started going to springs when I was living there, they functioned for me as a mikve. I remember we went once on this all-night desert tour and then jumped in the ma’ayan at sunrise,” he says, using the Hebrew word for spring. “It was refreshing, purifying, a spiritual experience. There is something pure about being in water that is coming out of the mountain.”

Click for special JPost features
He says it’s more meaningful to perform the ritual bath, usually done before Shabbat, holidays and other special occasions, in a natural setting. “It is a theme in Judaism – water is Torah, water is life, the kind that comes from the ground is the best kind, the highest form of a mikve.”Levy recalls that the local residents work to rehabilitate the infrastructure of the spring from time to time, but the rustic feel remained basically intact with little maintenance.For intrepid explorers like Margolin, who drives his jeep out to visit the countryside weekly, springs serve as an ideal setting to sit and enjoy the landscape. Wherever he goes a small gas stove accompanies him. Water from the spring is combined with Turkish coffee, boiled to perfection and then served in small glasses, half of which always seem to be cracked. “There was a time when I wouldn’t go on a hike without a spring being the destination, it had to be part of the itinerary,” Margolin says.At a recent visit with him to Ein Haniya near Jerusalem there were several shepherds from Walaja, a Palestinian village in the West Bank. A mule, donkey and flock of sheep were grazing on the countryside, which was unusually green due to all the rains. An old tuna can and Red Bull container sufficed in lieu of a finjan, or traditional coffee pot. “This really is the life,” he says. 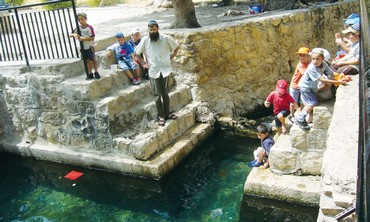