By ELANA KIRSH
Numbers Crunch 311
(photo credit: Mrkay Design)
Advertisement
The past week was choppy in Israeli news, with focus jumping from continued speculation on Iran’s nuclear program, the evacuation of a house in Hebron, to pro-Palestinian protests in over 80 countries around the world. While JPost readers continued to favor reports related to tensions with Tehran, one off-topic story made it into the Top Five: the Global March to Jerusalem (also known as Palestinian Land Day).JPost Top Five most-read stories:1. 'Confrontation with Iran may be delayed to 2013'2. PLO bestows journalism award on Helen Thomas3. Report: Baku grants Israel use of its air bases4. IDF, police brace for Global March to Jerusalem5. Report: Cabinet hears 300 would die in Iran strikeAs part of both The Jerusalem Post’s regular news coverage and its expanded social media program, JPost.com hosted a real-time live Twitter feed on the protests, featuring updates, pictures and videos posted by reporters in the field. The new media reporting initiative is proving increasingly popular; streams have also covered events such as last week’s Kadima primary and the unfolding of settler activists’ eviction from Hebron’s Beit Hamachpela this week.In terms of numbers, the most popular stream was last Friday, when activists the world over protested to mark the 36th anniversary of Land Day. A team of Jerusalem Post reporters covered the protests, including Ben Hartman on the northern border, Tovah Lazaroff from Bethlehem, Melanie Lidman and Hadas Parush on news and video from Kalkilya, and Yaakov Katz, Yaakov Lappin and Oren Kessler on their respective beats.Aside from providing breaking news updates which thousands of readers were also following on JPost.com, the live coverage gave online viewers immediate access to a broader range of content, as it happened. The following posts were among the most popular in the stream, and showcase the wide scope of dispatches coming through the stream.

Unlike in classic reporting - even online - the stream enables reporters to Tweet unfolding details as they happen, and add details and assessments as they come in.

The platform also allows reporters to share humorous or personal details which rarely have a place in hard news stories, giving readers a real feel for the scene.

In light of the tear gas shooting a bee landing by my computer suddenly does not seem so dangerous. #jpost. #gmj

And then there’s the standard news updates, the facts and figures, concisely squeezed into 140 characters for editors to untangle and readers to take in on the go.

Video clips were also embedded into the stream to thicken the coverage. Overall, some 10,000 readers tuned in to follow the past two week’s live feeds.Elsewhere on social media, meanwhile, fans of were taken by photos of a different nature: celebrity spotting in Israel. The most popular post of the week, by Likes, comments and shares by fans, was this photo of Tobey Maguire’s surprise visit to the Western Wall in Jerusalem. 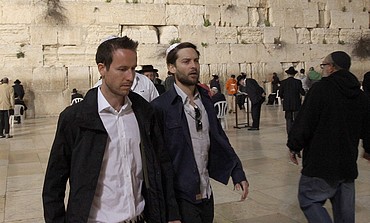 In other news, JPost readers were right on the money in a quick vote taken ahead of last week’s Kadima primary, though the numbers were a bit off. Over 80% of respondents thought Shaul Mofaz would take the party leadership, and he did - but with just over 60% of the vote in the final count.

To wrap up, a Passover-flavored video currently trending on YouTube, which was also featured in The Weekly Schmooze on Thursday. The video, which builds on the popular “Sh*t people say” meme, has garnered over 50,000 views in the past few weeks.From news sites to blogs, tweets to videos, The Numbers Crunch is a weekly column which zooms out and brings you the big picture online, from Israel, the Middle East and around the world, and poll results from JPost.com.The writer is the Internet desk manager at The Jerusalem Post
Advertisement
Subscribe for our daily newsletter