By elana kirsh
OCTOBER 10, 2011 13:23
Numbers Crunch 311
(photo credit: Mrkay Design)
Advertisement
The media fervor over the Palestinian statehood bid in the UN died down in the past two weeks, after dominating Israeli headlines throughout September. This week, JPost readers’ interests appeared to be less centralized, with the Top Five stories covering news across the region in both diplomacy and defense, as well as popular columnist Caroline Glick’s Rosh Hashana column.Top Five most-read stories1. US official confirms al-Qaida’s Awlaki killed in Yemen
2. Panetta hints US opposed to unilateral action against Iran
3. French UN envoy warns of ‘strong' risk of strike on Iran’
4. 'Israel to tell UN Palestinians aren’t ready for statehood’
5. Column One: A prayer for 5772The most-read story on JPost was tied for the third biggest issue in US media, filling 5 percent of the newshole, according to the Pew Research Center’s News Coverage Index. A recent JPost.com poll, meanwhile, found that over 70% of respondents believed that killing Awlaki was ethically acceptable.

Click for more JPost.com poll resultsThe other story in the third spot in US news coverage was the trial of Michael Jackson’s doctor, while news related to the 2012 presidential election took the top slot at 15%. Not surprisingly, then, US President Barack Obama was the lead newsmaker, with 64 story mentions, according to the same PRC index. The Middle East got little attention in US news coverage last week, filling just 4% of the newshole.JPost talkbackers, however, were still focused on the Palestinians’ efforts to have a state recognized, with three of the five most-active threads related to the issue.Top Five most-active threads1. Merkel chides Netanyahu over Jerusalem building plans
2.'Israel to tell UN Palestinians aren’t ready for statehood'
3. European Parliament: Palestinian statehood is legitimate
4. Panetta arrives in Israel for meeting with PM, Barak
5. Israel says 'yes' to Quartet framework for talksOn YouTube, meanwhile, protest videos again took the top spots on the site’s Newsroom this week, in keeping with trends throughout 2011. The difference this week was that dramatic footage was coming from New York, Iceland and Greece, rather than from the Middle East and North Africa as we’ve become accustomed to seeing. Most notable were the Occupy Wall Street protests, of which thousands of clips were posted on the video sharing site.And on social media, it was tech meets tech meets tech, with sites abuzz with talk of the new iPhone followed by the tragic death of Apple founder Steve Jobs, changes to Facebook and the announcement that the beta version of Google+ is open for all to use. The Pew Research Center’s New Media Index noted an interesting technological dissonance among bloggers - excitement in the build-up to the new Apple release (which turned out to be largely a let-down), juxtaposed with dissatisfaction about changes to both Facebook and Netflix. On blogs, the new iPhone was the top subject, followed by Netflix and Google+, while on Twitter, Facebook changes were getting the most tweets, followed by the controversial execution of Troy Davis in Georgia and then Google+.Back in Israel, talk of the mass social protests which marked the summer had largely calmed on Twitter, according to Trendsmap.com. In fact, the top trend in Tel Aviv was #nobel, after Israeli scientist Dan Shechtman was awarded the Nobel Prize for Chemistry. There was far more Twitter activity in the Jerusalem and Hebron areas than in Gush Dan this week, according to the real-time trend mapping site. 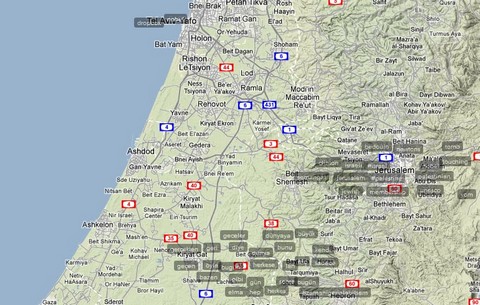 From news sites to blogs, tweets to videos, The Numbers Crunch is a biweekly column which zooms out and brings you the big picture online, from Israel, the Middle East and around the world, and poll results from JPost.com. If you have stats to share, e-mail elana@jpost.comThe writer is the Internet desk manager at The Jerusalem Post
Advertisement
Subscribe for our daily newsletter