Also, this week's most tweeted tags across the Middle East, more videos from Syria, and Jpost readers have their say on cottage cheese.

By ELANA KIRSH
Numbers Crunch 311
(photo credit: Mrkay Design)
Advertisement
Just over a year since nine Turkish citizens were killed and seven IDF commandos injured when Shayetet 13 naval commandos intercepted the last Gaza-bound flotilla, Jerusalem Post readers are again showing a clear interest in flotilla-related stories. The Numbers Crunch ranked the most-read 10 stories on Jpost.com in the past week, amid reports of sabotage and dwindling numbers in the naval convoy aiming to reach the Gaza Strip this month.
Half of the top 10 stories were related to the planned flotilla, which has since been detained by Greek authorities.

Click for full Jpost coverageIn a recent Jpost poll, readers were fairly unanimous on the issues, with 29 percent voting that participants should be prosecuted and boats sank, over 40% voting that the passengers should be deported, and less than 5% voting for the Navy to hold back from any interference. Almost 4,000 readers voted in the poll.

Poll resultsOn the alleged sabotage of two ships, however, readers were split, with roughly 30% voting that Israel was behind the damage, 30% disagreeing, and 30% undecided.Elsewhere on the web, Syria continued to make headlines on both news sites and social media, as well as on video-sharing sites. A playlist of clips compiled by YouTube and featured as the site’s top news topic showed mass demonstrations on the streets after Syrian President Bashar Assad’s third address since protests began earlier this year.Jpost readers were split on what action the international community take in reaction to the ongoing clashes; almost 40% urged an interventionist response, while just over 30% were against any action being taken at all. Only 5% of respondents suggested opening borders and taking in refugees.

Poll resultsDespite almost six months having passed since mass protests on Cairo’s Tahrir Square resulted in the ouster of Hosni Mubarak, the top hashtags trending in the region were still #egypt and #tahrir square, according to real-time trends site, Trendsmap. 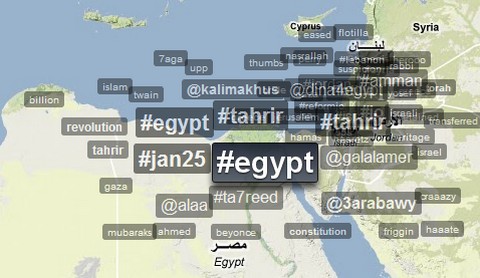 Trendsmap.comAcross the region on twitter, politics dropped from the main news topics, with 17% of tweets sharing a live feed of the lunar eclipse which was visible from Africa, the Middle East and most of Asia. The Pew Research Center’s New Media Index also recorded 14% of news tweets relating to global warming.In local news, Gilad Schalit’s family marked five years since the IDF soldier’s capture, with a series of events around the country, including a 24-hour web broadcast in which celebrities and politicians took turns pacing around a mock prison cell. Jpost readers voted that either the international community should pressure Hamas to release the solider (27%) or the IDF should devise a rescue mission (30%).

Poll resultsAnd in softer local news, Israelis got active on facebook, opening pages to protest the exorbitant price of Israeli staple food, cottage cheese. The facebook event itself drew online considerable traffic, with over 100,000 people replying as “attending.” In a recent poll, Jpost readers voted that they saw the campaign as a reflection of Israeli discontent (30%) and a plea for prices to be regulated (35%).From news sites to blogs, tweets to videos, The Numbers Crunch is a bi-weekly column which zooms out and brings you the big picture online, from Israel, the Middle East and around the world, and poll results from Jpost.com. If you have stats to share, email [email protected]The writer is the Internet desk manager at The Jerusalem Post
Advertisement
Subscribe for our daily newsletter