By elana kirsh
JULY 13, 2012 19:02
Numbers Crunch 311
(photo credit: Mrkay Design)
Advertisement
Local social media reactions to the verdict in former prime minister Ehud Olmert’s corruption trial were similar to those on traditional media this week, with the term “prosecution” trending high in the Middle East in the days following the verdict. The trend was the highest in Israel in the past week, according to Trendsmap. 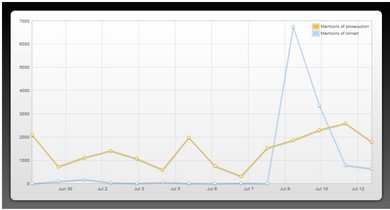 In the days following the former prime minister’s acquittal, the terms “Olmert” and “prosecution” were both trending high in Israel, with a peak of over 6,000 tweets on July 9, the day before the verdict was read. 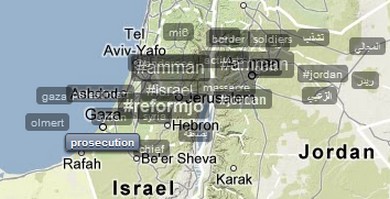 A Jerusalem Post poll taken after the acquittal found that Olmert would have a huge impact were he to return to politics, though the former Kadima leader has vehemently denied seeking his old job back. Were Olmert to form a new centrist party that included Kadima and Yesh Atid Party leader Yair Lapid, it could win 30 seats, compared to 27 for Prime Minister Binyamin Netanyahu’s Likud, the poll found.The poll also revealed that if Olmert returned to the helm of Kadima, the party would win 17 seats, compared to just eight under its current head, Shaul Mofaz. Kadima under Olmert would take three mandates away from Labor, one from Yisrael Beytenu and five from the newly formed Yesh Atid.On the issue of who is most fit to be prime minister, Netanyahu won by a wide margin. Thirty-three percent said Netanyahu, 15% opposition leader Shelly Yechimovich, 12% Olmert, 10% Foreign Minister Avigdor Liberman and just three percent Mofaz. The prime minister did especially well among respondents under 30, while Olmert fared better among people over 50. Among those who voted for Kadima in 2009, 30% preferred Olmert, 22% Yechimovich, 19% Netanyahu and only one percent said Mofaz or Liberman.An unscientific quick vote taken on JPost.com the day after the verdict was announed found that JPost readers were overwhelmingly supportive of the court’s ruling, with over 50% voting that the state should be lauded for uprooting corruption, convicting Olmert of even a minor crime. A further 20% of over 500 respondents took a more laid back approach, stating that there was no need for a special state prosecutor reaction to the former prime minister’s acquittal.

While Israelis were talking, tweeting and posting about Olmert, however, JPost readers were less interested in local news. Instead, the most-read stories of the past week covered an array of issues including allegations that late Palestinian leader Yassir Arafat was poisoned, a World War II era letter and a scientific breakthrough in Geneva.JPost Top Five most-read stories:
1. 'Polonium found on Arafat's clothing was planted'
2. 'Hezbollah setting IDF up for another Goldstone'
3. Letter: Hitler protected Jewish WWI veteran
4. Israelis rejoice over discovery of 'God particle'
5. Church of England weighs link to anti-Israel groupSimilarly on the talkback forums, issues such as efforts to bring about the release of Israeli agent Jonathan Pollard and dialogue on West Bank settlements stirred up more conversation than Olmert’s acquittal. The Arafat issue was the only story to appear on both lists.JPost Top Five most-active threads:
1. Woolsey: 'Pretend Pollard is a Greek-American, and free him'
2. Israel won't cooperate with UN settlement probe
3. US-Pakistan apology may yield Israel-Turkey detente
4. 'Polonium found on Arafat's clothing was planted'
5. Peres: Settlement building threatens Jewish stateOn the Post’s Facebook page the most popular posts spanned a wider variety of issues. All of the most viral posts were visual - either a photo or an album - and generated thousands of likes, comments and shares. The high engagement on the story of Iranian Pastor Youcef Nadarkhani, who has been sitting in an Iranian prison for 1,000 days, was particularly notable on the new timeline.JPost Top Five Facebook posts:
1. Iranian Pastor Youcef Nadarkhani
2. Photo album: Religious Jews pray at the Kotel during Shiva Asar Batamuz
3. Israel's first International 3D Pavement Drawing Festival
4. Profiles of olim in the IDF
5. Photo of the day: Pascal Berkovitch rides her hand bikeGil Hoffman contributed to this report
From news sites to blogs, tweets to videos, The Numbers Crunch is a weekly column which zooms out and brings you the big picture online, from Israel, the Middle East and around the world, and poll results from JPost.com.The writer is JPost.com’s Managing Editor
Advertisement
Subscribe for our daily newsletter