By ELANA KIRSH
Numbers Crunch 311
(photo credit: Mrkay Design)
Advertisement
Three separate Jerusalem Post photo albums on Facebook drew strong engagement in the past week, the highest numbers to date on the new page. Two of the albums, posted prior to and after the Tel Aviv Gay Pride parade drew mixed responses from readers, and the third - exclusive shots of David Arquette in Jerusalem - reached thousands of News Feeds via shares and likes. 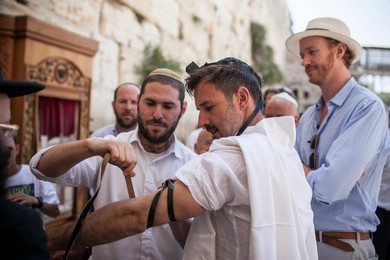 Elsewhere on new media, it was strictly news topics trending in Jerusalem, according to Trendsmap. Aside from generic terms “Israel,” “Palestinian,” “Jews,” “Arab,” and “Muslim,” the top terms all referred to news stories from the previous week. A series of Tweets including the word “injured” referred to two Palestinians reported hurt in an exchange of fire between IDF troops and Palestinian gunmen on the Gaza border on Thursday night; the terms “bid” and “council” were used on posts regarding a Palestinian Authority bid to use an emergency procedure to register Bethlehem’s Church of the Nativity as a World Heritage site and the word “Ulpana” was highly visible on Trendsmap as settlers called on supporters to head to the Ulpana outpost to thwart IDF plans to demolish five buildings by July 1.On JPost.com, meanwhile, a two-year old story surfaced on social news website Reddit and pulled tens of thousands of page views, making it the most-read single article on the site this week. Also spread across the Web was the story of a Jerusalem Post reporter who was attacked by a mob in Greece, whose video from the scene went viral on YouTube the previous week. Making up the rest of the Top Five were three diplomatic stories, all related to ongoing violence in Syria.JPost Top Five most-read stories: 1. 'Germany makes final payment for WWI reparations'2. Video: ‘Post’ journalist attacked by mob in Greece3. Putin to visit Israel amid Syria, Iran concerns4. Clinton tells Syria's Assad to quit, leave country5. 'Hezbollah may move Syrian arms to Lebanon'Almost half of respondents to a JPost poll voiced opposition to Western involvement in Syria, as the international community mulled a response to the violent crackdown that began with pro-democracy protests in March 2011. In a quick vote taken in the past week, 43 percent of respondents voted against  international intervention, whereas some 27% said that they believe ousting Syrian President Bashar Assad would break the Iran-Syria-Hezbollah axis.

On the talkback forums diplomatic stories also stirred up conversations, with two of the five most-active threads focused on the stalled Israeli-Palestinian peace process, one story on efforts to stop the Iranian nuclear program, a poll on US President Barack Obama’s standing with American Jewry, and an opinion piece on Israel’s borders.JPost Top Five most-active threads:1. US: Settlement activity undermines peace efforts 2. US 'disappointed' by Iran-IAEA atom talks failure 3. PA sets conditions for informal talks with Israel 4. Poll: Jewish support for Obama on the rise 5. The myths of 1967 and today’s realities To wrap up, a catchy mash-up of Obama garnered over 12 million views in less than 10 days, making it the most-watched YouTube news video this week. The clip - produced by a 19-year-old US college student - was made from snippets of speeches made to sound like the US president is singing Carly Rae Jepsen’s hit song "Call Me Maybe."Tovah Lazaroff and Reuters contributed to this reportFrom news sites to blogs, tweets to videos, The Numbers Crunch is a weekly column which zooms out and brings you the big picture online, from Israel, the Middle East and around the world, and poll results from JPost.com.The writer is the Internet desk manager at The Jerusalem Post
Advertisement
Subscribe for our daily newsletter