The Weekly Schmooze: Return of the Magenta Yenta 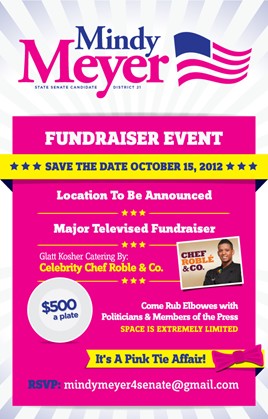 The "Magenta Yenta" struck again this week. Mindy Meyer, New York State Senate candidate and Internet sensation, brought an elephant representing the Republican Party to a campaign event in a Long Island country club, where all the chairs and tables were painted in her trademark Pepto Bismol pink. Meyer wore a pink (of course) evening gown, peppered her speech with puns, and was filmed for a US reality show called Chef Roble & Co., whose star provided the food.  PETA slammed Meyer after the event, saying that elephants "suffer immensely" at such appearances.Don't mess with comedienne Sarah Silverman, or you'll have to deal with her dad. After Silverman released an expletive-laden video on voter-ID laws, Rabbi Yaakov Rosenblatt wrote an open letter in The Jewish Press basically saying that Silverman is sad because she isn't married and having babies. Silverman's father, Donald Silverman, was not happy with the turn of events, and commented on the letter: "Hey Rabbi Idiot: Is your wife allowed to go to a minion [sic] or sit at the front if [sic] a bus or choose between abortion or birth. Take your false God and shove God up your judgmental a**." Ouch. 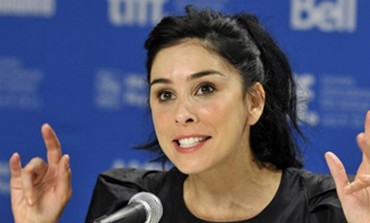 Sarah Silverman (Reuters)Showtunes fans rejoice! Glee creator Ryan Murphy asked the Divine Miss M. herself, Bette Midler, to guest star on the show while onstage at an award ceremony, and Midler agreed. Her role on the show has yet to be revealed, but Midler has some ideas.

In other music news, rapper Rick Ross put out a mixtape called "Black Bar Mitzvah." The music seems to have very little to do with anything Jewish, except for a segment called "Rosenberg Skit," in which New York DJ Peter Rosenberg pretends to be the rabbi presiding over Ross' coming-of-age ceremony – though he says things no self-respecting rabbi would say. Jewish rapper Drake also appears on the album, though he does not follow up his HYFR video with more Jewish references.
Download Mixtape | Free Mixtapes Powered by DatPiff.com
Last but not least, Israeli actress Meital Dohan started a career as a pop star in 2011, and has been singing in minimal – but very sparkly – clothing ever since. Her latest song is a collaboration with singer-rapper Sean Kingston that makes her sound like a low-rent Ke$ha.The Weekly Schmooze collects the hottest Jewish culture news from around the world. Ranging from celebrities to philanthropy to quirky communities, we're here to schmooze about Jews. If you have any news to share with The Weekly Schmooze, write to: [email protected]