The Weekly Schmooze: The new 'show about nothing'

JPost column on hottest Jewish news: Cher Horowitz on how to dress like a JAP; Mindy Meyer, the hot-pink senator.

By LAHAV HARKOV
JULY 26, 2012 13:39
weekly schmooze 311
(photo credit: Courtesy)
Advertisement
Jerry Seinfeld and Larry David may have created "the show about nothing" in the 1990s, but this time, they've outdone themselves. David had Curb Your Enthusiasm, but after years of failed post-Seinfeld projects, it looks like Seinfeld found something that really works for him on his new online series Comedians in a Car Getting Coffee. The two drive in an old VW Beetle and discuss David's picky eating, free-range chicken, semaphore vs. semicolons and other random, mundane topics that they somehow manage to make hilarious.Last week, The New York Times' Sunday Book Review section featured a hilarious interview with 79-year-old Jewish comedienne and (sort of) fashion critic Joan Rivers. She talks about not reading The Idiot's Guide to Osteoporosis, because her wrist snaps when she picks it up, and watching Sacha Baron Cohen's The Dictator, aka the film version of Anna Wintour's biography. Rivers also wishes Stephen Hawking could explain bad fashion choices, in addition to the universe. 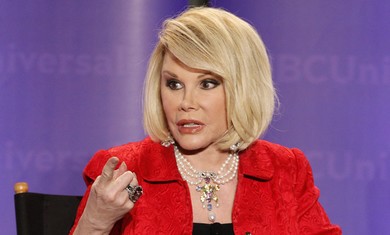 Can we talk?
(Credit: Reuters)The Schmooze has hit over 1,000 followers on Twitter (@LahavHarkov) but is trailing far, far behind the likes of, say Justin Bieber and the celebrities who read mean tweets about them on Jimmy Kimmel this week. Matisyahu was told he looks like an old, fat Bieber now that he shaved off his beard, and Larry King faced a particularly cruel and unusual tweet.If Hawking every gets around to writing that book, he won't have to explain the fashion choices of one Ms. Cher Horowitz – the main character, portrayed by Alicia Silverstone in Clueless. If you want to dress like the ultimate Jewish American Princess, look no further than this profile in fashion site The Coveteur. The site has some of Cher's most memorable outfits and links to buy copycat looks. Don't forget, Alaia is a "totally important designer," and a collarless white shirt from Fred Segal is the most "responsible-looking" thing you can possibly wear. Or, if you're too lazy to check out the site (As if!!) you can watch every outfit Cher wore in under a minute:A JAP on the big screen is one thing, but how about one in the New York State Senate? Well, the Empire State may find out soon, because 22-year-old Orthodox Jewish Brooklyn resident Mindy Meyer is running for office. Meyer's hot-pink campaign site has gone viral, with LMFAO hit song "Sexy and I Know It" playing in the background, since her slogan is "I'm senator and I know it." The candidate said her website is meant to attract young voters, and admits that she was inspired to go to law school and run for office by the film "Legally Blonde." New York News | New York Breaking News | NYC HeadlinesThe Weekly Schmooze collects the hottest Jewish culture news from around the world. Ranging from celebrities to philanthropy to quirky communities, we're here to schmooze about Jews. If you have any news to share with The Weekly Schmooze, write to:weeklyschmooze@gmail.com