Amnon Nissim, aka Amnon Matkot, Amnon the King, and Amnon the Cannon, is a major player along Israeli shores.

By HADAS PARUSH
Amnon Nissim
(photo credit: Hadas Parush)
Advertisement
Amnon Nissim, also known as Amnon Matkot, Amnon the King, and Amnon the Cannon, is a famous matkot player across Israeli beaches.Named after its racket, the Matka, Matkot is a non competitive game in which two players hit a ball back and forth as many times as possible without dropping it. Matkot is popular all along Israeli beaches and is often referred to as Israel's unofficial national sport. 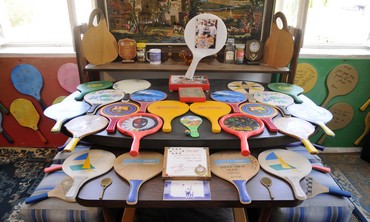 Nissim is also widely known for housing the single and most impressive matkot collection. Over the years, his house in Neve Tzedek in Tel Aviv has become the Matkot Hall of Fame, or the Matkot Museum, with over 300 matkot which Nissim either collected, used and broke, or was given as gifts from admiring visitors.