By LAHAV HARKOV
Bette Midler
(photo credit: Reuters)
Advertisement
Do you love rapping along to your favorite hip-hop songs, but can't do it because of a certain racial slur commonly used by black rappers? Well, Adam Pally of "The Mindy Project" has a solution for this problem, which is common among Jewish hip-hop lovers. Just say "Schwimmer." Check out Pally's performance.Lea Michele may be on "Glee" for the long haul – her character, Rachel Berry, was just cast in the leading role in Funny Girl on Broadway, after all – but she's still working on a career as a pop singer. This week, Michele released "Cannonball," the first single off of her upcoming album "Louder." Michele told MTV News that the lyrics of the empowering song helped her get over the death of her boyfriend and "Glee" costar Cory Monteith, who passed away in July.Mila Kunis plays the title role in upcoming Wachowski siblings film "Jupiter Ascending," the brother and sister's first original screenplay since "The Matrix." The movie, co-starring Channing Tatum, is set to be released in July, but the trailer came out this week.The Divine Miss M. is going to play Mae West. Bette Midler is set to star and executive produce a film based on the 1930s star's autobiography Goodness Had Nothing to Do With It for HBO films, Deadline Hollywood reported. 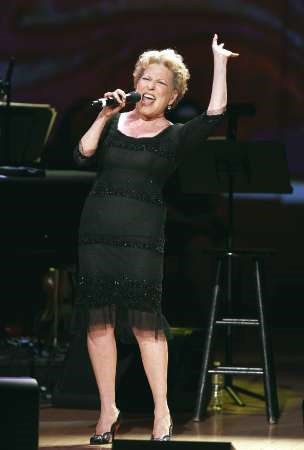 Bette Midler
(Credit: Reuters)When NPR "Planet Money" hosts David Kestenbaum and Jacob Goldstein snapped a photo of a man in Kenya holding a shirt from "Jennifer's Bat Mitzva," they asked the Internet to help them track down Jennifer as part of their reporting on American used clothes ending up in Africa. JTA's Adam Soclof found Jennifer, as well as the woman whose mother donated the old Bat Mitzva t-shirt (t-shirts were a major 90s Bar and Bat Mitzva trend) and interviewed them. 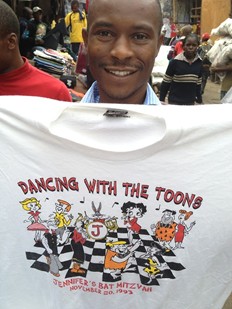 A Kenyan man with a used bat mitzva shirt.
(Source: JTA)Grammy Award nominees were announced last weekend, and three out of five possible winners for "Best Song" are Jewish, according to a list compiled by Tablet Magazine. Pink and Nate Ruess of the band fun. are both Jewish and nominated for writing "Just Give Me a Reason." Ari Levine co-wrote Bruno Mars' hit "Locked Out of Heaven," and Lukasz Gottwald, best known as pop hitmaker Dr. Luke, is one of five writers of Katy Perry's "Roar."If you have any news to share with The Weekly Schmooze, write to: [email protected]