The Weekly Schmooze: Thanksgivukkah's around the corner

By LAHAV HARKOV
OCTOBER 3, 2013 12:19
weekly schmooze 311
(photo credit: Courtesy)
Advertisement
After a very long hiatus – who knew all the holidays would fall on Thursdays? – the Schmooze is back and better than ever!First of all, now that the three weeks of Tishrei holidays are over, the next thing we have to look forward to is Hanukkah, or Thanksgivukkah, since the Festival of Lights coincides with Thanksgiving. Luckily, Buzzfeed has a complete guide on how to commemorate the momentous occasion, which only happens once every 70,000 years, with DIY crafts and amazing recipes combining the best of both holidays like potato latkes with cranberry applesauce. 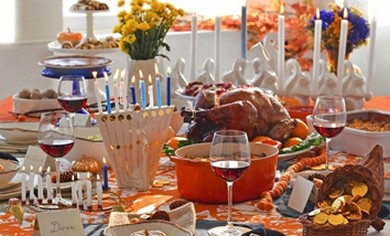 Thanksgivukkah. (Buzzfeed)Meanwhile, three Jewish sisters are taking the indie rock scene by storm. I'm talking about HAIM, of course. Sisters Danielle, Alana and Este Haim, have been playing music their whole lives, became serious as a band in 2012, and have a huge celebrity following. NPR interviewed them this week, and has a link to stream their entire album, "Days are Gone." In case you were wondering, their name is pronounced "hyme" not "hayme."If you're concerned about whether Amare Stoudemire is serious about becoming an Israeli citizen or not, you should know that he's still working on it. Stoudemire told New York that he's "close" to finishing the process, and that it would be "great" to join the Israeli national basketball team. He also said Passover is his favorite holiday, though his wife, Alexis Welch, is partial to Shabbat meals. The two said they try to avoid technology on Saturdays. 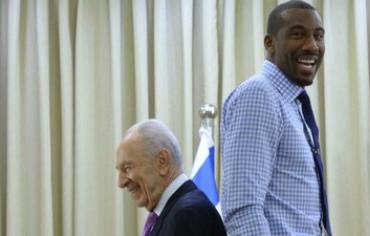 The new season of SNL began last week, and with it came a parody of Schmooze favorite "Girls," in which Tina Fey portrayed "Blerta," Hanna's new Albanian immigrant roommate."Girls" writer, director and star Lena Dunham, for one, enjoyed the send-up.

Last but not least, we have the movie trailer for "Jewtopia," in which Ivan Sergei stars as a non-Jewish guy who falls in love with a Jewish woman, played by the always-gorgeous Jennifer Love Hewitt, and decides to pretend to be a Member of the Tribe. Bloggers cried foul after seeing the clip, calling it offensive, but the Schmooze just wants to know where they were when "Jewtopia" was a successful Off-Broadway play.If you have any news to share with The Weekly Schmooze, write to:
weeklyschmooze@gmail.com