By LAHAV HARKOV
AUGUST 1, 2013 17:06
The Weekly Schmooze 300
(photo credit: JPost.com staff)
Advertisement
Now that we know New York mayoral candidate Anthony Weiner  took a while to give up his sexting habit (and may still not have shaken it), the Internet is abuzz with parody photos and videos and articles.First, we have a parody of Weiner's campaign video, staring none other than his alter-ego Carlos Danger.    Broadway Diva Kristen Chenoweth, who starred in the Broadway musical Wicked, sang a version of the song "Popular" from the play, with some adjustments to match Weiner's predicament – and encourage his wife, Huma Abedin, to be independent:     Last but not least, we have the cover of this week's New Yorker, presented without comment: 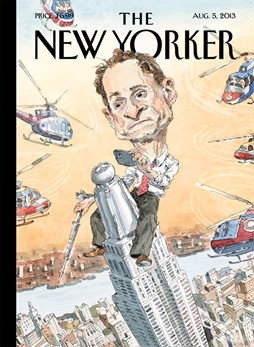 This could easily turn into an all-Weiner schmooze, so let's move on to some better-behaved Jewish men in New York, The Maccabeats. The Yeshiva University a cappella group came out with a new video, covering the Sara Bareilles song "Brave." For some reason, they're holding instruments, but not playing them.  Comedian Paul Scheer has been posting word-for-word recreations of the 90s classic talk-show "The Arsenio Hall Show" on YouTube, with Scheer playing Arsenio Hall, flat-top wig and all. This week, Scheer was joined by Max Greenfield, aka Schmidt from "New Girl," hilariously playing Vanilla Ice. Flava Flav even makes an appearance!  Last but not least, we have the penultimate episode of "Bubala Please." Gangsta Yids Luis and Jaquann demonstrate the difficulties in being shomer Shabbat – especially when you accidentally leave your answering machine on and your friends are inviting you to smoke weed and watch movies in which Halle Berry gets naked. Actor Fred Melamed guest stars as a rabbi.If you have any news to share with The Weekly Schmooze,write to: weeklyschmooze@gmail.com