The Zionist poet who left the land

The street’s juxtaposition of historic glory and later neglect and dilapidation is a metaphor for the life and times of Naphtali Herz Imber.

By WENDY BLUMFIELD
MARCH 5, 2010 19:29
Rehov Naphtali Imber 311
(photo credit: WENDY BLUMFIELD)
Advertisement
It is seldom that the character of a street actually reflects the person for whom it is named, but there is a sad relevance in the derelict and neglected state of Rehov Naphtali Imber in the lower Hadar neighborhood in Haifa.At a recent discussion of Zionist poets, my friend and fellow writer Marion Lupu told me of some historical material she had read on Naphtali Herz Imber and threw in the comment: “Rehov Imber is just below the shouk.” I responded that it was a strange location to commemorate such a great Zionist poet.I then wandered along Rehov Naphtali Imber with my camera, amazed at its eclectic mixture of landscape and architecture, which I have never noticed when driving through that neighborhood. 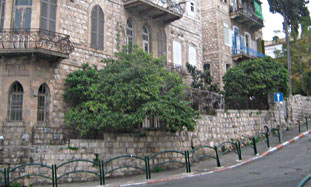 Undiscovered by tourists and most Haifa residents, the lower Hadar still bears traces of its upper-class houses of long ago, the once-opulent Turkish stone mansions with their magnificent arched windows. Up to the 1950s there was very little building on the higher slopes of the Carmel, and the Hadar was an elegant shopping and cultural center with the residential neighborhoods built along the quiet leafy streets that run parallel to Herzl and Ha’atzma’ut.But these old stone mansions are outnumbered by a concrete jungle of shoddy crumbling apartment buildings, the seediest of the oldest government housing of the ’50s. While a few beautiful private gardens and elegant trees have survived, most of the roadside is litter-strewn scruffy undergrowth. Just below this street is Wadi Salib, which some municipalities would have restored as an artists’ colony. Instead most of it was paved over for access roads to the new government office campus. In the distance is the port and the heavy industry of Checkpost. A couple of tiny synagogues are perched on the slopes at the side of the road, serving the small population which still lives there.Overlooking the street is the back facade of the Talpiot market hall whose Bauhaus design is now almost unrecognizable, covered with grime and laced with rusty staircases. Yet there is still the basic structure of curved windows which once illuminated the interior of the market galleries.The Talpiot market is still a busy outlet for fruit and vegetables and fresh food, but it is concentrated in the noisy and crowded basement area or the streets around.This juxtaposition of historic glory and later neglect and dilapidation is indeed a metaphor for the life and times of the great Zionist poet who left Eretz Yisrael for the United States after only 10 years.For Naphtali Herz (Zvi) Imber, a passionate Zionist, a brilliant linguist, scholar and writer whose early adult years brought him fame and recognition, died in poverty in the US at 54, a drunkard and a vagabond.Naphtali Imber was born to a hassidic family in
Galicia in 1856. At 22 he was so inspired by the founding of Petah Tikva that he joined Hibbat Zion. He was already a recognized poet and he wrote constantly of the redemption of the Land of Israel.In 1882 he arrived in Palestine, and it was at a farmers’ meeting in Rishon Lezion that he read out his poem: “Tikvatenu.” This so inspired a local farmer, Samuel Cohen, that he set it to the music that we know today. It was not an original composition but adapted from a traditional Moldavian-Romanian folk-song which is why some of the bars are hauntingly familiar and can sometimes be heard at random in pieces totally unrelated to “Hatikva.”Still called “Tikvatenu,” the poem was published in 1886 in Imber’s first anthology, Morning Star.The song was sung as “Hatikva” at the conclusion of the Sixth Zionist Congress in Basel in 1903 but was only officially recognized as the Zionist anthem at the 18th Congress in Prague in 1933.Meanwhile Imber became known in the Holy Land, writing poetry and essays for Hebrew journals. According to literary historian Z. Shavit, Imber’s poetry was divided between a continuation of the Haskala literature and the revival poetry of Gordon and Bialik.Then started a period of his life which, while expanding his social circle, might have contributed to his later despair and abandonment of the Land of Israel. Imber became secretary to Sir Laurence Oliphant, British diplomat, writer and mystic. Oliphant was a champion of the Zionist cause and wrote the book The Land of Gilead, which is an amazing prophecy of the development of the modern State of Israel. Imber had a passionate affair with Lady Alice, Oliphant’s wife who was 18 years his junior, an artist and a photographer, and reputed to be very beautiful. This continued apparently with the approval of her husband for they all lived together in a Templer house in the German Colony in Haifa and spent the summers on the peak of the Carmel Forest at their house in the Druse village of Daliat al-Carmel. That house is today the commemoration center for the Druse fallen soldiers.Lady Alice died of a fever at 40 in 1886. Whether this so distressed Imber that he could not continue his life in Palestine is not known. He traveled to London and India, and finally in 1892 arrived in the US. He was reputedly married for a short time, and he published his second volume of poetry. He earned his living translating, among other works, talmudic literature into English and Omar Khayyam into Hebrew.Possibly influenced by Oliphant’s interest in mysticism, Imber spent those years in America dabbling in Kabbala and prophesy. He called himself “Apostle of the Kabbala” and wrote in The Los Angeles Times under the name of “professor.”On October 15, 2009, Tablet magazine published an article by Rutgers University Yiddish scholar Eddie Portnoy, which revealed predictions for 2010 that Imber had written in The Los Angeles Times in 1897. These include a prophecy of recession and economic hardship, a changing of the global map and the development of solar power. He claimed that by 2010 California wine would be as famous as French champagne.But most astonishing was his prediction that Kansas would split off from the Union followed by Missouri and Illinois. A major war would split not the south from the north as happened in the Civil War but would divide the east and the west.A distant relative, attorney Steve Imber, now living in Kansas read this article in the Kansas Jewish Chronicleand commented that he had heard many bizarre stories of hisgreat-great-great uncle told by his grandfather, New Yorker Harry Imber.Inwhat could be described as a model for the Welsh poet Dylan Thomas,Imber, who had showed such promise and passion in his youth, became alonely eccentric and alcoholic at the cost of his creativity. He diedof the complications of chronic alcoholism in 1909 and was reinterredin Jerusalem in 1953.The song “Hatikva” is his epitaph.
Advertisement
Subscribe for our daily newsletter