Try baking with the classic chocolatey hazelnut spread, Nutella. Here are some recipe ideas that incorporate this divine ingredient.

By GOURMETKOSHERCOOKING.COM
Nutella cookies
(photo credit: Courtesy)
Advertisement
I had Nutella for the first time when I was a teenager visiting Israel.  It was love at first taste.  Since that trip many years ago, I have worked at creating great recipes that include the chocolate spread in a tasty way without making something too rich. These two desserts are delicious.  They have that distinctive hazelnut and chocolate flavor.  You can use the parve substitute for Nutella without a problem.  You may need to soften it a bit in a microwave to get it to fully incorporate.Chocolate Nutella Cookies
Makes 5 dozen

1 1/2 sticks of unsalted margarine, room temperature
3/4 cup of brown sugar
3/4 cup of white sugar
1 cup of parve Nutella spread (chocolate hazelnut cream spread)
1/2 teaspoon of vanilla
2 eggs
2 cups, plus 2 tablespoons of all-purpose flour
1/4 cup of unsweetened cocoa
1/2 tsp baking soda
1/2 tsp salt1 cup of chocolate chips
1/2 cup of chopped hazelnuts (optional)1 Preheat oven to 175C (350F.)Cream margarine in an electric mixer for three minutes until light and fluffy. Add the sugars and parve Nutella and mix well, scraping down the sides of the bowl to ensure even mixing.2 Add the eggs, one at a time, beating for 30 seconds between each. Add the vanilla and mix for 10 seconds.3 Sift together the flour, cocoa, salt, and baking soda (do not skip this step as sifting eliminates clumps of cocoa). Mix into the margarine mixture on low speed until fully incorporated, scraping down the bottom and sides at least once to ensure even mixing. Fold in the chocolate chips and hazelnuts and refrigerate the dough for ten minutes.4 Spoon tablespoon-sized drops of dough onto parchment paper lined cookie sheets. Bake at 350F for 10-12 minutes. Allow to cool on the sheets for a minute or two before transferring to a wire rack to finish cooling.Chocolate Nutella Truffles
Makes about 12- 18 truffles, can be made parve 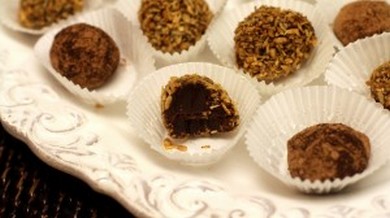 Any infused flavor in chocolate truffles is rich and delicious.  But the creamy hazelnut flavor of Nutella or the parve equivalent makes for an extra creamy and extra decadent truffle.100 grams dark chocolate (at least 60% cocoa)
1/3 cup heavy whipping cream or parve whipping cream
150 grams ounces Nutella (or other brand of hazelnut spread or parve equivalentIngredients for rolling: toasted grated coconut, chopped nuts, cocoa powder, etc.Using a kitchen knife, finely chop the chocolate and place it in a bowl.Heat the heavy cream until it becomes hot but should not reach a boiling point.
Pour the heavy cream over the chopped chocolate and let it sit for one minute. Using a spatula stir the chocolate until completely melted. Pour the chocolate cream on top of the Nutella (in a separate bowl) and mix them until completely incorporated.Cover the bowl and place in the fridge for at least one hour until it becomes solid.  Once the truffle mixture gets cold, take it out from the fridge and roll it into small balls.Roll the bolls in coconut, chopped nuts, cocoa powder, etc. or anything coating for your choice.Place the truffles in a plate then in the fridge for at least 1 hour before serving. These recipes were brought to you by www.gourmetkoshercooking.comFollow @JPost_Lifestyle
Advertisement
Subscribe for our daily newsletter