Plenty of fish (in the bag)

Use an old French cooking method and inspiration from around the globe for this holiday’s fish dish.

By JERUSALEM POST STAFF
AUGUST 15, 2013 10:51
Indian sea bass with aloo gobi and curry vindaloo
(photo credit: Boaz Lavi)
Advertisement
En papillote (French for “in parchment”), or al cartoccio in Italian, is a method of cooking in which the food is put into a folded pouch or parcel and then baked. In fact, what it means is the food is cooked in steam created inside the pouch. In Israel, many home cooks use cooking bags in the kitchen, unaware that it is an old French method.For the coming holiday season, chef Zvi Avisar of the Rothschild Hotel in Tel Aviv offers various fish recipes from India, Italy, Asia, Morocco and Israel, all cooked in this method. The fish used are all very “meaty” and stay moist thanks to this cooking method.Indian sea bass with aloo gobi and curry vindaloo
Serves 4 Cooking bags
✔ 550 gr. fillet of sea bass (called levrak in Israel), cleaned and cut into 12 pieces (3 per person, about 140 gr. each portion)
✔ 4 potatoes, peeled
✔ ½ small cauliflower, separated into florets
✔ Olive oil
✔ Salt For the curry
✔ 4 tsp. apple vinegar
✔ 4 tsp. water
✔ ¼ tsp. black pepper
✔ 1 tsp. grated ginger
✔ 1 tsp. cardamom seeds
✔ 1 clove garlic
✔ 4 cloves
✔ 2 shata peppers (optional)
✔ ¼ tsp. ground coriander
✔ 1 tsp. turmeric
✔ 1 tsp. ground cinnamon
✔ 1 tsp. cumin seeds Heat oven to 180º.Slice potatoes into ½ cm slices. Blanch cauliflower in boiling water for a few seconds and strain. Spread the potatoes and cauliflower on a baking sheet and season with olive oil and salt. Cover tightly with aluminum foil and bake for 30 minutes or until vegetables are tender.Using a blender or food processor, mix together all the curry ingredients until it has the consistency of paste. Add a little water if necessary. It is possible to use a mortar in the traditional fashion.Place the cooked potatoes and cauliflower in a bowl and cover with the curry paste, reserving some for the fish. Season the fish with salt and pepper and coat with the curry paste.Cut squares from the cooking bags. The squares should be large enough to hold 1 portion. Divide the potato and cauliflower mixture between the squares and plate in the middle of each. Add 3 fish pieces to each square. Gather the corners of the squares and tie together as parcels, using the metal ties or a string.Bake in the oven for 10 minutes. Remove from the oven and very carefully open the parcels. You may serve the parcels on plates and open in front of the diners or empty onto plates and then serve.Mullet with Jerusalem artichoke and black lentils
Serves 4 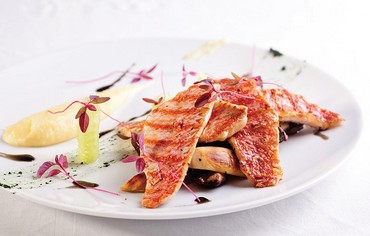 This dish is inspired by our local cuisine and cooked in the French way.Cooking bags
✔ 550 gr. fillet of mullet (called buri in Israel), cleaned and cut into 12 pieces (3 per person, about 140 gr. each portion)
✔ 20 Jerusalem artichokes
✔ 8 Tbsp. black lentils
✔ 1⅓ tsp. ras el hanout seasoning mix
✔ Olive oil
✔ Salt and black pepper Peel the artichokes and blanch in boiling water for 3 minutes.Cook the lentils in boiling water until ready.Place the artichokes in a bowl and mash with a fork. Leave lumps. Add the fish and lentils to the bowl and season with salt, pepper and olive oil.Cut 4 squares from cooking bags. Place the fish and artichoke mixture in the middle of each square. Tie the parcels and bake in a 180º oven for 8 minutes.Asian-style Salmon
Serves 4 ✔ 550 gr. fillet of salmon, cleaned and cut into 4 pieces about 140 gr. each
✔ 200 gr. spinach
✔ 16 green bean pods, ends cut
✔ 1 carrot, peeled and julienned
✔ ½ cauliflower, separated into florets
✔ 4 Tbsp. baby corn (frozen or canned)
✔ 2 Tbsp. sesame oil
✔ 4 tsp. soy sauce
✔ 4 slices fresh ginger Cooking liquid
✔ 2 cups water
✔ ¾ cups sugar
✔ Zest of 1 orange or lemon
✔ 3 Tbsp. mirin vinegar (available at Asian shops or Asian section of the supermarket) ✔ 4 Tbsp. miso (available at Asian shops or Asian section of the supermarket) Place all the ingredients of the cooking liquid in a pot and bring to a boil. Let cool In another bowl, mix the vegetables together, season with soy sauce, sesame oil and ginger. Season the fish with salt and pepper.Cut 4 squares from cooking bags. Place the vegetable mixture in the middle of each square. Place salmon on top of the vegetables.Pour 3 Tbsp, of the cooking liquid on each portion and tie the parcels. Bake in a 180º oven for 12 minutes.Italian-style meagre with artichokes and tomatoes
Serves 4 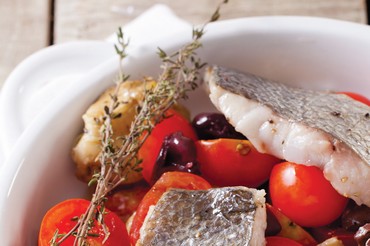 ✔ 550 gr. fillet of meagre (called musar yam in Israel), cleaned and cut into 12 pieces (3 per person, about 140 gr. each portion)
✔ 16 pieces of Italian canned artichoke, halved
✔ 20 cherry tomatoes, halved
✔ 4 Tbsp. Kalamata olives, pitted
✔ 4 Tbsp. olive oil
✔ Salt and pepper
✔ 1 sprig thyme, leaves only Mix artichokes with tomatoes and olives- Season the mixture with olive oil, thyme, salt and pepper. Cut 4 squares from cooking bags. Place the vegetable mixture in the middle of each square. Season the fish with salt and divide among the portions. Tie the parcels and bake in a 180º oven for 12 minutes.Moroccan-style Nile perch
Serves 4 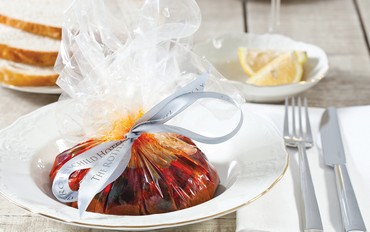 The Rothschild Hotel is a beautiful new boutique hotel located in a historical building in the middle of Tel Aviv’s hippest boulevard. The restaurant, located at the entrance level of the hotel, offers French-inspired “Zionist” gourmet cuisine, serving sophisticated light meals based on local ingredients and French cooking methods. In the morning, the restaurant serves a delicious breakfast to hotel guests and patrons.
Advertisement
Subscribe for our daily newsletter