A Herzliya clinical psychologist releases a new Hebrew book, "The Voices of Children" tackles the traumatic subject of divorce in the words of the child victims.

By JUDY SIEGEL-ITZKOVICH
SEPTEMBER 5, 2010 03:31
daniel gottlieb 311
(photo credit: Courtesy)
Advertisement
Dr. Daniel Gottlieb, who has listened to children of divorce for 24 years as a clinical psychologist in Herzliya, has now given them a voice. Although mountains of books on divorce have been published, Gottlieb felt he wanted to speak to the youngest victims of family breakups – and to their parents – in the voice of an “intelligent 10-year-old who has the ability to analyze things but still has an innocence about him.”Born in the US, married and the father of five, the family therapist received his doctoral degree in New York from Yeshiva University’s Ferkauf Graduate School of Psychology and his training in family therapy from the Ackerman Institute for the Family in Manhattan. He came on aliya with his family 24 years ago and immediately started working at Herzliya’s Shinui Institute (www.shinui-institute.com) – a private center for family therapy of which he is clinical director.CALLED Kolam Shel Yeladim (The Voices of Children), the 92-page hardcover, Hebrew-language book is written almost like poetry, expressing the feelings of youngsters whose families have suddenly fallen apart. The sensitive messages are certainly for the kids, but also for their divorced or soon-to-be-divorced parents, who must learn not to argue constantly, accuse each other or engage in other negative behaviors that makes the child feel terrible. “There are plenty of books on divorce, but they don’t focus on the feelings of the children and the couples,” Gottlieb told The Jerusalem Post in an interview after the publication of his new book.“I originally intended it for parents,” he said. It began as a column he writes weekly in Hashabbat, a Shabbat handout for the Tzohar organization of moderate Orthodox rabbis. As close friends of his were going through a nasty divorce, he decided to write about the emotional difficulties for adults and children. “It really took me only 20 minutes to write, as I am so familiar with the subject. I appear frequently in family and rabbinical courts as an adviser on custody evaluations and to speak about the children.”The book didn’t take him a long time to write either. “I was thinking in Hebrew, and wrote it in Hebrew. But I have translated it into English, and I do hope to publish it in that and other languages because it will reach a much larger audience,” he said. “It has a universal message.”HE HAS received feedback from numerous children who read his book. “I have it on the table in the waiting room of my office. One child, for example, started to read it and asked her mother to buy it. She was affected positively. Children have feelings that they are often unable to express. When they see those feelings on a printed page, they realize there are others in the same situation.”He stressed that although divorce is described in the book as a very painful subject, he is “not anti-divorce. I have a problem with very bad divorces. Breaking up a family is rarely good for children, but if it’s a very violent or otherwise detrimental marriage, there is no choice but to split up.”When you fight, I feel like crying.I don’t know who is right And, to tell the truth, I don’t really care.When you say not-nice things about each other I feel hurt and confused.I don’t like hearing bad things about my parents. 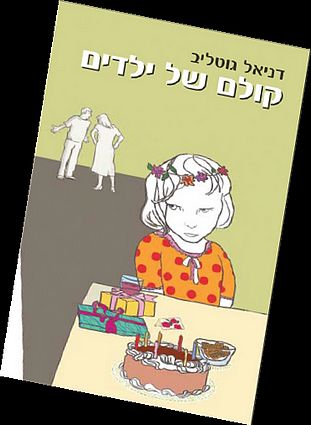