Those with avoidance behavior were more likely to suffer from post-traumatic stress, according to TAU team.

By JUDY SIEGEL
APRIL 15, 2010 02:50
sderot woman trauma 311
(photo credit: Ariel Jerozolimski)
Advertisement
A first-ever Israeli study of the traumatic effects of war in real time on civilians on the home front – based on data from during the Cast Lead offensive in Gaza – has found that many of those closest to the danger detached themselves from the situation instead of the expected reaction of remaining alert to stay safe.Those with avoidance behavior, they found, were more likely than the others to suffer from post-traumatic stress symptoms, according to the team headed by Prof. Yair Ben-Haim of Tel Aviv University’s psychology department.The study is being published on Thursday in the online edition of the highly respected American Journal of Psychiatry of the American Psychiatric Association. Until now, civilian victims of terrorism and war have been observed weeks or months after the fearful events, but in this study, they were questioned and their performance of tasks tested on laptop computers during the Israel-Hamas war that began on December 27, 2008.The team of nine, which included psychologists, MDs and university students, recruited 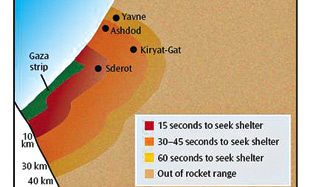 131 people ranging in age from 15 to 75 (with an average age of 37). Of these, 99 were within 40 km. of Gaza; 28 within 10 km. (Sderot); 47 in a range of 10 km. to 30 km. (Ashdod and Kiryat Gat); and 24 were 30 km. to 40 km. from the Strip (Yavne). Thirty-two participants were from outside the rocket range in Tel Aviv.Data were collected between January 3 and 8 last year, during the height of the conflict, when dozens of Gazan rockets were fired and siren alerts were frequently sounded in the south of Israel. Team members interviewed participants mostly in their apartments, but a handful were met in public meeting spaces and bomb shelters. Those tested answered questionnaires and were asked to perform “dot-probe tasks” on a laptop computer, to test their attention in response to acute threat. Then they were tested for symptoms of post-traumatic stress disorder by answering a standard PTSD checklist. After the campaign ended, those within range of the rockets were examined for PTSD symptoms.Surprisingly, and contrary to conventional opinion among researchers, the more actual the threat from the rockets, the more those in danger were likely to avoid paying attention to information that could help them survive, the researchers found. The Bar-Haim team found that reaction times of participants who had up to 45 seconds to seek shelter were generally slower than those of participants who had 60 seconds to do so or who were outside when the sirens sounded.Follow-up contrasts indicated that PTSD and depression symptoms were equally low in participants outside of rocket range and participants who had 60 seconds to seek shelter. However, each additional reduction in alert time was mirrored by significant increases in symptoms, the team wrote. “Attentional threat avoidance may reduce the acute impact of imminent threat, but this may come at a price in terms of increased symptoms of psychopathological symptoms.”They suggested that their findings may be useful for those interested in treating clinically significant post-traumatic reactions, by making it possible for victims to be more attentive and alert to dangers and thus reduce their risk of PTSD symptoms later.Prof. Danny Brom, of the Jerusalem Center for Psychotrauma, Herzog Hospital and the Hebrew University, said that “when you hit somebody on the head, he immediately says ‘ouch.” But in the situation of civilians being threatened constantly by rockets, we wonder if they suffer from trauma after the event as well as when the traumatic events are still going on. Avoiding the signs of danger could be a healthy, adaptive survival response. But the researchers found the opposite.“It is a very interesting research study in a top psychology journal,”said Brom, who has authored books on PTSD, “and there should beadditional research on the subject.”He added that he would be glad to cooperate with the Bar-Haim team, asthe psychotrauma center in Jerusalem has data on 500 Sderot familieswith young children that started to be collected four years ago to seewhether their daily life affected the exposed children’s development.“We see evidence that their development was affected, apparentlybecause their parents are more anxious and less tuned into theirchildren’s needs and problems,” he said. “It is not easy to beconstantly alert to chronic threats, and even now it is not completelyquiet, as rockets continue to fall unpredictably. Calming down and themgetting anxious again when rockets land again can be very damaging,”Brom said.