On the sunny side of the street

Sun-friendly gadgets for your carbon footprint.

By DAVID SHAMAH
AUGUST 27, 2010 17:22
solar panels 311
(photo credit: Courtesy)
Advertisement
This summer was one for the books – the hot weather books, that is. Day after day of hot, sweltering. 40+ degree days, followed by uncomfortable nights – those global warming people went just a little too far this month. Things may have cooled down a bit this week, but we’re not out of the hot water just yet – there’s plenty of sun, if not fun, still on the way.Israel usually gets plenty of sun throughout the year, not just in summer, and fortunately we’ve learned to make use of the sun as a power source, at least to some extent. Most homes here have solar water heaters installed on their roofs, and the Israel Electric Corporation recently inaugurated a program that allows businesses and homeowners to generate electricity from solar panels installed on buildings. As a leader in hi-tech, local companies have been doing wonders with solar technology (http://tinyurl.com/33dzcyk), but most of these technologies and products are made for large-scale deployment.But what about us lesser folk? Instead of our harnessing the sun to generate energy, we’ve been using energy to undo its work (leaving the air-conditioner on the highest possible setting). It would be great if we could use the sun to power our homes, or at least some of the stuff in it – beyond the solar water heater or the solar-powered calculators we already use. Never fear: We’ve got the lowdown on sun-friendly gadgets that will make you feel better about your carbon footprint. And while there are no guarantees on how much energy you will actually save using these spiffy devices, you’ll definitely get points for commitment – and coolness – for sporting them.Solar-powered camping equipment: The sun’s energy is free, but to use it, you’ve got to have access to it – meaning that a solar-powered TV set isn’t very practical, unless you watch television in your backyard. Solar-powered camping equipment, however, makes a great deal of sense, and there are products of all sorts designed for those who spend time outdoors, from flashlights to radios to solar-powered tents. For example, the BoGo series of flashlights (http://www.bogolight.com/) have a well-deserved reputation as being designed for the most rugged outdoor conditions, with solar-power that can light up a room for as long as 20 hours.BoGo (an acronym for Buy One, Give One) is more than just a flashlight brand – it’s a cause, where for each flashlight you buy, you can donate one to any number of trouble spots in the world. Bill Clinton has donated more than 30,000 BoGo lights to Haiti, where the conditions are a lot tougher than anything you and I are likely to experience anytime soon. 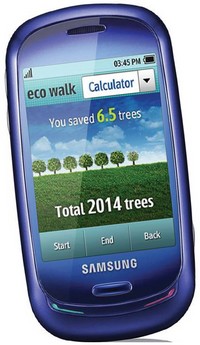 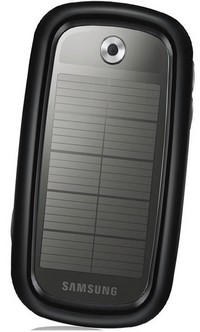 e, and is designed to power all manner of devices, including iPods, iPhones, BlackBerries and many other cellphones and data devices. Just let it sit in the sun while you’re at the beach or at a barbecue, and the Solio charger will be ready to go anytime – holding its charge for up to a year – and can be used with up to 3,200 devices.The company also has a handsome looking laptop bag, with a photovoltaic panel sewn into the case that will actually recharge your laptop while it sits in the back seat of the car. According to the site, Solio products are used by eco-friendly folk the world over – including US President Barack Obama.Speaking of the Sun: How many times have you found yourself desperately seeking an electrical outlet to recharge your cellphone, just to make a quick phone call? How much more sense would it make to put a solar panel on the back of a cellphone? That’s exactly what you get with the Samsung Blue Earth (http://tinyurl.com/3aeh2wo), a touch-screen cellphone with Bluetooth and Internet. The Blue Earth is made of environmentally friendly materials, and its case and charger are free of harmful chemicals, the company says. And it even includes a “carbon footprint pedometer,” which tells you how many trees you’ve saved by walking instead of driving.But the Blue Earth’s best feature is that solar charger; if you run out of juice, just leave it on the windowsill for a few minutes to generate enough power to make a quick call, so you can at least call the people who are looking for you and tell them your cellphone is out of commission.Interestingly, Samsung has an even more interesting solar-powered phone – the Guru (http://tinyurl.com/34ehf5c), designed specifically for customers in India. It’s got an FM radio and a flashlight, was designed for use in places where the sun is strong and the electrical supply is spotty – and it only costs about 60 bucks.Sunny with spotty electric power? That sounds familiar, doesn’t it – especially on highvolume production days at the Israel Electric Corporation. Any chance of getting an Israeli version of the Guru? Http://www.newzgeek.com
Advertisement
Subscribe for our daily newsletter