By EHUD ZION WALDOKS
JUNE 28, 2010 04:40
jellyfish 311
(photo credit: Courtesy)
Advertisement
It’s only the last week of June, and off Israel’s coasts the second swarm of jellyfish this year is floating along. Usually, the first swarm hits this week and next, according to Israel Oceanographic and Limnological Research (IOLR) Center Senior Scientist Dr. Bella Galil.“It’s very unusual for the first swarm to have come the first week of June,” she told The Jerusalem Post Sunday. Galil has been tracking jellyfish since the early 1990s and even named one.That jellyfish, whose scientific name is Rhopilema nomadica Galil, is the one 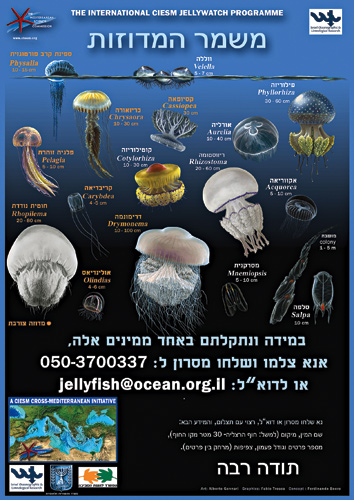 that gives bathers so much trouble along Israel’s coasts, as it is more venomous than native species of jellyfish. Experts believe the Rhopilema arrived in the Mediterranean Sea via the Suez Canal in the 1970s and since the mid-80s has been forming huge flotillas every summer, according to Galil. While there are native Mediterranean species of jellyfish, they usually appear off the coast in winter, in vastly smaller numbers and are far less venomous.As an invasive species, Rhopilema quickly came to dominate the area and now lives its entire lifespan in the Mediterranean. An invasive species is one which is brought or migrates to a new area where it lacks natural predators and so can outcompete native species.The current swarm is 100 kilometers long, Galil said, and in the entire Mediterranean jellyfish swarms have been increasing in frequency over the last decade.“It used to be that a mega-swarm would occur once a decade, but since 2000 there we have them every summer, from Spain to the Levant. However, whereas in the western and central Mediterranean the swarms are made up of native species, in the Levant the aliens have taken over,” Galil said.Rhopilema and other species of jellyfish have stung tens of thousands of bathers around the Mediterranean over the last decade. In some instances several hundred people were stung in a single day.In addition to stinging bathers, the jellyfish, voracious and efficient predators, are consuming vast amounts of fish and shrimp larvae and depleting the food chain. Scientists are concerned the Mediterranean could turn into a “gelatinous” sea rather than a “fish” one. The jellyfish hurt coastal fisheries as they fill the nets to bursting and prevents fishers from sorting the meager yield. They also harm coastal installations. In 2001, the Israel Electric Corporation had to clean out tons of jellyfish from its seawater intake pipes to its major power plants at an estimated cost of $50,000.

This year, Israel will join the “JellyWatch” in full for the firsttime. The CIESM Mediterranean Science Commission first tested theprogram in Italy in 2008 and extended it, in part, to Israel last year.Tunisia and France are set to join soon even as Israel fully deploysthe program along its Mediterranean coastline.Under the “JellyWatch” program, frequenters of the beaches – bathers,surfers, lifeguards, yachters, fishermen and others – will be asked tophotograph any jellyfish they see and send the photos in along with adescription of where they saw them. Posters will be pasted all over thecoast to help with identification.For the first time, the poster has been translated into Hebrew by Galiland her colleagues and will be posted this week along the beaches.So next time you see a jellyfish, don’t run away. Whip out your cellphone, snap a shot of it and help scientists study this growingphenomenon.
Advertisement
Subscribe for our daily newsletter