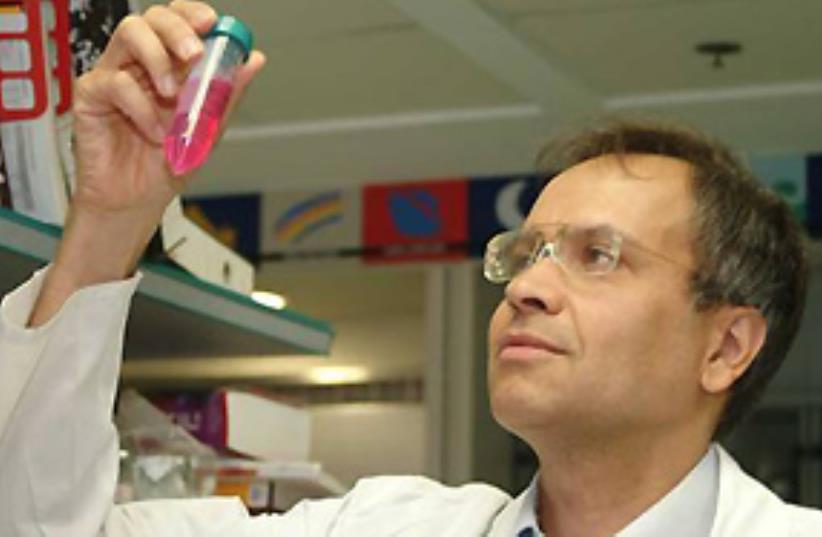 Prof. Benjamin Reubinoff 311
(photo credit: courtesy)
Advertisement
A new technology developed at Hadassah University Medical Center has made it possible to produce large amounts of human embryonic stem cells for industry and research by growing them in suspension.Until now, hESCs – which have the potential of ripening into any other type of body cells for repair of tissues and organs – have been created in small numbers.Called a “breakthrough” in hESC technology, the research was just published in the prestigious science journal Nature Biotechnology. The article, titled “Derivation, propagation and controlled differentiation of human embryonic stem cells in suspension,” was written by Dr. Debora Steiner as part of her post-doctoral work under the direction of Prof. Benjamin Reubinoff, both of Hadassah’s Human Embryonic Stem Cell Research Center, with participation by other Hadassah colleagues.
HESC research has been stymied by the fact that it has, until now, beendifficult to make large amounts of them. Conventionally, they have beencultured as colonies consisting of one cell layer attached to a flat“bed” of chemicals or nutrients. The involved a great deal of work, andthe number of hESCs produced was limited.It was thought that propagation of hESCs in a suspension (a mixture inwhich fine particles are suspended in a fluid where they are supportedby buoyancy) was impossible because under these conditions, the cellswould stop multiplying and instead undergo uncontrolled ripening intovarious types of cells.But the Hadassah researchers developed unique conditions that made itpossible for the cells to multiply significantly in suspension withoutdifferentiating into specific cell types. By changing the conditions ofthe culture, they showed that they could control the ripening of hESCclusters in suspension into neural spheres. Thus instead of being grownon beds in one layer, the stem cells could be cultivated in large vatswith precise, computerized monitoring of growth conditions.
Advertisement
Subscribe for our daily newsletter