From boosting short and long term memory, to thinking clearer and faster, find out which foods can increase your brain power.

By KATHRYN RUBIN
Berries 311
(photo credit: Courtesy)
Advertisement
Some foods are good for the heart, some make our bones strong, others reduce the risk of cancer; but did you know that certain foods can make you smarter? Many foods are rich in nutrients that can improve memory, motor skills, concentration and metal clarity. Certain foods can even aid our brains in the long run, as they can help prevent the onset of certain degenerative diseases, such as Alzheimer’s. RELATED:Healthy Eating: A Valentine’s Day leftover Healthy Eating: Food synergy So here are five foods that will fuel your brain (and some that don't): Berry-licious 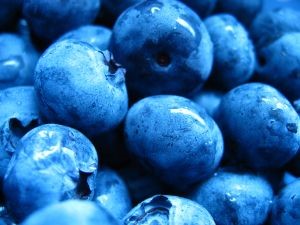 Blueberries
Like all fruits, berries are healthy for you – there’s no question about it. However, within the berry family, one member truly shines above the rest – take a guess, it’s blue. High in fiber and low sugar, blueberries have been shown to improve cognitive processing (i.e thinking). Nicknamed the “brain berry”, blueberries receive their bright blue pigment from the antioxidant anthocyanins. While these pigments protect the fruit, when consumed these antioxidants help protect our brain from free radicals (tiny molecules that are formed during regular metabolic activities, such as breathing, and even more so when we are exposed to toxins, such as cigarette smoke and air pollution).  So why exactly are free radicals harmful (particularly to our brains)?  Imagine what happens when you leave a nail outside exposed to just plain air - it begins to rust. Oxidation, the process which causes metal to rust, can also harm brain cells. The antioxidants found in blueberries help reduce and may even help prevent damage caused by this “oxidant stress”, which plays a role in many age-related diseases such as Dementia and Alzheimer’s. (TIP: If fresh blueberries aren’t available to you or are out of season, opt for the frozen kind. The flash freeze process locks in all the nutrients, making them even healthier than fresh blueberries that are beginning to lose their color and spoil). However, if blueberries aren’t your favorite of the berry family (or they are not available in your region), then blackberries will do. Also rich in anthocyanins, blackberries will also help protect our brains from oxidation stress. Another "berry" good friend of the brain are antioxidant rich strawberries. This red berry is packed with the flavanoid festin, which was found to improve long term memory as well as iodine, which is needed for proper functioning of the brain and our nervous system.Short- Term Memory Booster:  A Shot of Espresso 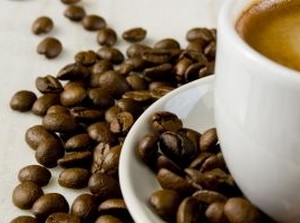 Coffee
Coffee is one of those controversial foods – some people say it’s good for you, other say it’s bad, and some just can’t function without it. So what’s the real story here? Much like the cocoa bean, coffee beans are loaded with antioxidants, amino acids, minerals and vitamins – all important for our brain. In fact, a cup (or two) a day of regular black coffee has been shown to reduce the risk of degenerative disease such as Alzheimer's and Dementia; while on a daily basis, black coffee (or a shot of espresso) has been shown to enhance short-term memory performance and the ability to complete complex tasks.However, the problem with coffee (surprisingly just like chocolate) arises when it is combined with other unhealthy ingredients – when a simple cup of black coffee morphs into a peppermint white chocolate mocha with caramel sauce  or mint mocha chip frappucino with extra whip cream. Not only have you added about 500 calories (of pure fat and sugar) to your day, but the extra sugar in these drinks will cause your blood sugar to spike and then quickly fall, quickly negating the “wake me up” effect that you were hoping to achieve with the coffee. The Call of the WildWild salmon (not farm-raised) is one of the best sources of the all important Omega-3 fatty acid. As the name suggests, essential fatty acids are well “essential” to us and because they cannot be produced by our bodies, we need to obtain them from external sources (i.e. foods). In fact our brain is made up of more than 60% structural fat, which in order for our cell membranes to function properly needs to be mostly Omega-3 (Omega -3 allows signals to pass quickly and efficiently between the membranes of our brain cells). Now while all fish contains this essential fatty acid, wild-caught cold water fish, such as salmon, are richer in omega-3 than other warm water fish. Go Nuts for Nuts 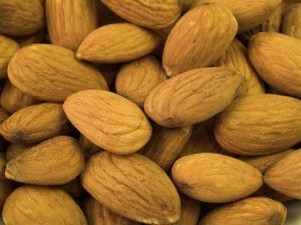 Almonds
Nuts are loaded with fiber, protein and “good” monounsaturated fats; but that’s not all! Walnuts, like salmon, are rich in Omega-3 fatty acid; while almonds and hazelnuts are chock full of Vitamin E, a powerful anti-oxidant. Almonds also contain phenylalanine, a compound which has the unusual ability to cross the blood-brain barrier. There it stimulates the brain to produce mood-boosting neurotransmitters – dopamine and adrenaline. Dopamine is important for our memory, attention, and problem solving skills; while adrenaline is connected to focus and attention as well as energy levels.  Cashews, on the other hand, are loaded with magnesium, which helps to dilate our blood vessels, thereby allowing more oxygenated blood to reach the neurons (in our brain). However, remember everything in moderation – the high fat content in nuts, pushes their caloric content through the roof, so try not to overdo it. Also, a lot of mixed nuts are seasoned and roasted with salt. This is a major no-no; instead opt for the raw unsalted kind. Egg- cellent   YolkEggs sometimes get a bad rep for increasing cholesterol; however, if you do not have cholesterol or heart problems to worry about, they are actually very important for your body, particularly your brain. Egg yolks are known for being high in protein as well as vitamins and minerals; however that’s not all. They are also rich in choline - a key component of many fat-containing structures in our cell membranes. Like Omega-3 fatty acid, our bodies only produce minuscule amounts of this nutrient and we therefore have to rely on external sources to receive adequate amounts of it. Choline is an important part of two fat-like molecules in the brain (phosphatidylcholine and sphingomyelin), that make up a significant portion of the brain's mass; therefore it is critical for brain function. Moreover, consuming sufficient amounts of choline, especially early in life — during early chicldhood and even fetal development—may improve learning abilities as well as help retain what was previously learned. (TIP: Opt for Omega-3 eggs as they have added amounts of this all important fatty acid.)Can some foods lower your IQ?We know that alcohol, candies, fried products and other "junk" foods are terrible for our heart, skin and waistline – but did you know that they are also can affect our brain? All foods can be measured on the glycemic index (G.I) – a measure of the effects of carbohydrates on blood sugar levels. Carbohydrates with a high G.I are digested quickly and rapidly release glucose into the bloodstream; while carbohydrates with a low G.I are digested slowly and gradually release glucose into the bloodstream. Sound simple enough, so how does this affect the brain exactly? While our brain only accounts for 2% of our body weight, it consumes approximately 20 percent of our daily calories (mostly carbohydrates). A fussy eater, our brain demands that it has its "food" in a certain way - it wants a steady constant supply, and really really hates dramatic fluctuations. Foods high on the G.I scale will instantly send blood sugar levels soaring (making you feel energized momentarily); unfortunately, what goes up, must come down. Within a very short period of time, your blood sugar will plunge – turning that sugar rush clarity into a deep fog. So while, high glycemic index foods cannot physically lower your IQ, they can cause you to feel inattentive, irritable and even drowsy – all feelings that will disrupt your learning and thinking abilities.
Advertisement
Subscribe for our daily newsletter