From boosting the immune system, to relieving stomach pain and fighting diseases such as cancer, find out what these teas can do for you.

By KATHRYN RUBIN
Chamomile Tea leaves
(photo credit: Courtesy)
Advertisement
Who doesn’t love to curl up in bed at night, turn on the television and sip a mug of hot tea? Ok, probably most men. But whether you are a tea drinker or not, there is no disputing it, this beverage is one of the healthiest drinks around. First cultivated in China almost 5,000 years ago, tea is the most consumed beverage in the world, after water. However, unlike green, black, white and oolong tea that are derived from the Camellia Senensis plant, herbal teas are not actually produced from tea leaves but are rather leaves, seeds, roots, flowers, dried fruits and even bark of various plants steeped in boiling water -  in fact herbal teas technically are not even classified as a tea. However, just because these infusions do not come from the Camellia Senensis plant, they still pack a hard punch when it come to providing health benefits as herbal teas provide all the plants’ nutrients in a convenient and  easily digestible form. Herbal teas, also known as tisanes, have surged in popularity recently thanks to the vast assortment of delicious flavors, a combination of different infusions as well as the positive publicity surrounding their numerous health benefits. Related:
Healthy Eating: Anti-histamine Foods
Healthy Eating: “You’re Not Sick, You’re Thirsty” Chamomile Tea
Probably the most popular of the herbal teas, chamomile tea has a sweet pleasant taste and is naturally free of caffeine. While it is known for its calming and soothing effects, this tea is so much more than just a mere relaxant. In fact, chamomile has been consumed for hundreds of years for its medicinal properties. For starters, many of us drink herbal teas, particularly chamomile, when our stomachs hurt, whether it is from the flu, indigestion or menstrual cramps – and it helps. Why? Certain studies have discovered that drinking chamomile tea increases glycine levels, an amino acid that calms muscle spasms, thereby reducing the pain caused by stomach and back aches as well as helping to reduce and even relieve menstrual cramps in women. Glycine also is known to act as a nerve relaxant, and so may also explain why the tea seems to act as a mild sedative, helping one fall asleep faster and more easily. 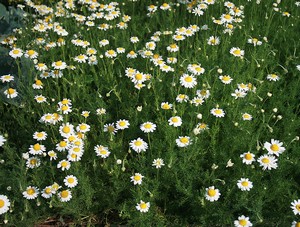 Chamomile flowersNext, when people suffer from a common cold, they typically turn to teas to help ease their sore throat. But did you know that drinking chamomile tea regularly can actually help prevent sore throats, colds and the flu entirely? The flavanoids found in chamomile tea has been show to boost our immune system, thereby helping the body fight off viruses and bacteria. However, the health benefits of chamomile tea extend far beyond just fighting off the common cold. Preliminary research has begun to show that daily consumption of this tea may help prevent complications of type 2 diabetes as well may reduce the risk of certain cancers. Peppermint TeaRecognized as a "stomach healer,” peppermint tea antispasmodic effect has consistently been linked with relieving symptoms of irritable bowel syndrome, stomach aches, bloating and general abdominal discomfort associated with this intestinal condition. These healing properties of the herb appear to be connected to its muscles relaxant abilities as when muscles surrounding the intestine are relaxed, there is less chance of spasm and the indigestion that can accompany it. The tea has been shown to reduce nausea and vomiting. Moreover, just because it is a tea, doesn’t mean the nutritional content should be dismissed. Rich in manganese, Vitamin C and Vitamin A (beta-carotene), peppermint tea leaves also contains rosmarinic acid, a compound that is recognized for its anti-oxidant, anti-viral and anti-bacterial properties – thereby helping to boost your immune system. Additionally, rosmarinic acid is recognized as an anti inflammatory, and therefore can help relieve congestion and sinusitis brought on by a virus or seasonal allergies. Drinking this tea may also offer some relief for mild asthma attacks, as it encourages the production of prostacyclins that keep the airways open for easy breathing. Finally, and for some people most importantly, drinking peppermint tea may temporarily reduce bad breath. Drinking the tea has a similar affect as sucking on a peppermint after a meal; however some research has show that regular consumption of the tea, may make bad breath permanently go away (although this is still debatable). But if you have tried everything else, drinking peppermint tea may be worth a try – if nothing else you are filling your body with all sorts of healthy and beneficial nutrients.Ginger TeaAn ancient herbal remedy, ginger tea has been and is used to treat a wide range of health problems, including nausea, vomiting or upset stomach due to motion sickness. Ginger also acts as a digestive aid as its two main ingredient, shogoals and gingerols, assist in neutralizing the acids in the stomach as well as stimulate the secretion of digestive juices, thereby helping in proper digestion of food. However, gingerol’s health benefits extend far beyond our digestive tract. As a potent anti-inflammatory, gingerols are believed to reduce pain caused by rheumatoid arthritis. Ginger also increases blood circulation which also helps treat joint pain as it stimulated blood circulation. In addition, as an anti-inflammatory, consumption of ginger tea also reduces symptoms brought on by a common cold or nasal rhinitis, such as congestion, sinusitis and even regular headaches as it reduces inflammation in the blood vessels. Finally, feeling chilled? Grab a mug of ginger tea, as it has a warming effect on the upper respiratory tract, and so has been used for thousands of years to treat colds and the flu.  Ginger tea is also a natural remedy for heart burn, as well as helps relieve stomach gas and bloating. Hibiscus Tea 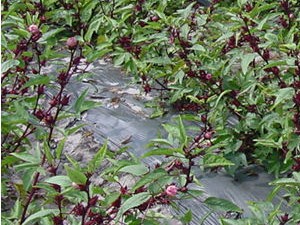 Roselle flowerMade from the flowers of a special type of hibiscus, called Roselle, this dark red tea is actually comes from the sepals or calyces, and not from the actual petals (like many other herbal teas). Unlike many other herbs, the hibiscus and its tea have been studied fairly extensively, with many human studies establishing its effectiveness at reducing the risk and even at treating various ailments. In fact numerous studies have shown that consumption of the tea acts can help reduce hypertension, as it acts in a similar manner as high blood pressure medications. Moreover, the tea is still loaded with with flavonoids (responsible for the heart-health benefits of red wine), polyphenolics, and anthocyanins (also found in blueberries and raspberries), which act as anti-oxidant, thereby mopping up damaging free radicals, that lead to pre-mature aging, cancer and even heart disease. Moreover, these anti-oxidants also prevent the oxidation of bad “LDL” cholesterol as well as boost the immune system.Ginkgo Biloba TeaDerived from the ginkgo biloba tree also known as Maidenhair Tree, ginkgo biloba tea is an ancient remedy praised for a host of health benefits including its mind-boosting properties. Acknowledged as one of the world’s oldest living species, fossils of the tree show that it has been around for more than 200 million years. While the tree originally came from China, where it was considered sacred amongst the Chinese monks, it has also been found across the world in Asia, America, Australia and Europe. How it got to these locations, remains a mystery, however some believe that Chinese traders brought it to foreign lands as gifts. But enough about this tree’s history and more about its health benefits, particularly about its memory and concentration enhancing abilities. Packed full with nutrients, the ginkgo biloba herb is known to facilitate and even increase blood flow to brain and oxygen to the rest of the body, thereby improving one’s short and long term memory as well as mental alertness, while reducing fatigue. Moreover, like many other herbal teas, the ginkgo biloba is loaded with anti-oxidants that destroy free radicals, which are responsible for many age related diseases including cancer as well as dementia and other memory age related disorders. Moving on to the cardiovascular system, consumption of this herbal tea has also been shown to help prevent blood clots, thereby helping to reduce the risk of strokes, as well as may help control the transformation of cholesterol into arterial plaque. On a day to day basis, this herbal tea can offer some relief for headaches, relieve stress, as well as act as an anti-inflammatory, thereby reducing symptoms from seasonal allergies. While the health benefits of ginkgo biloba tea may seem extraordinary, please note that if you are taking any prescription drugs, it is recommended to consult a doctor before consuming this or any of the herbal teas as the compounds in the tea can interact with certain medication. While these five herbal teas, offer some pretty remarkable health benefits, they are not the only ones – not even close. Today, practically every herb, seed or flower has become a tea, from cinnamon to lemon grass to different berries; and all of them offer an assortment of health benefits! So try out different ones and different blends to see which one suits your needs, and most importantly your taste buds.
So whether you want to improve your general well-being, or are after a cure for a particular ailment or just want a soothing warm drink to cap off your day, herbal teas will not disappoint.
Advertisement
Subscribe for our daily newsletter