The verdict is in on 7 favorite snack foods – find out which ones are not as healthy as they seem and which are much worse than you would have ever dreamed.

By KATHRYN RUBIN
Popcorn 311
(photo credit: Courtesy)
Advertisement
There are many foods out there, that you know aren't great for you, such as popcorn and pizza; but do you know how fattening these foods really are? Other snacks, like yogurt and dried fruit, are commonly perceived as healthy, but are they really? Before you take your next bite, get the nutrition lowdown on these masters of disguises. Here are 7 favorite snack foods that you may think are healthy, but sadly really aren't: RELATED:
Healthy Eating: Food for thought
Healthy Eating: A Valentine’s Day leftover PopcornWith only 30 calories and 0.36 grams of fat per cup, popcorn is considered a relatively healthy snack; especially when you start comparing it to fried potato chips and French fries. It contains no saturated or trans fats, it is high in fiber and it is a source of the heart and brain healthy  Omega -3 fatty acid, a “good” polyunsaturated fat. Popcorn kernels also are high in certain macro-nutrients, such as folate, vitamin A, iron, phosphorus, magnesium, zinc and potassium. However, and this is important, this only applies to air-popped unflavored unsalted popcorn! This unfortunately, is a far cry from the oil, butter and sodium drenched version you find at the movie theater.  In fact, a large (about 20 cups) of unbuttered movie popcorn has just as many calories and just as much fat as two McDonald’s Big Macs as well as almost a day’s worth of sodium! We are talking about roughly 1,000 calories – that’s about two thirds of a woman’s daily caloric intake and half for a man – and 60 grams of (mostly saturated and trans) fat. And that’s untopped! Start pouring on the butter sauce and you’ll quickly hit the 1,200 calorie mark as well as close in on nearly 80 grams of fat. Even a “small” bag has roughly 500 calories and 35 grams of fat. Also watch out for the home micro-waved version which can also be transformed into an unhealthy snack. Microwave popcorn is always higher in fat than air-popped corn, as some oil has been added to the microwave version. For instance, buttered flavored microwave popped corn, which has around 60 calories and 3.6 grams of fat per cup – twice the amount of calories and ten times the amount of fat as the air-popped version. While this may not seem like a lot – who really can just eat one cup? The verdict: Be kind to your waistline, and bring your own air-popped popcorn to the next movie you see. Bottled Green TeaA powerful antioxidant, drinking green tea has been linked with a number of health benefits, from fighting cardiovascular diseases, to reducing the risk of cancer to even speeding up one’s metabolism. A true miracle food, it was once believed that consumption of Green Tea could only lead to positive outcomes; unfortunately, this was before companies began to sell bottled blends that contain almost as much sugar as a can of Coca-Cola. It gets worse, the amount of sugar and water contained in each bottle, lowers and in some cases even completely eliminates the amount of catechins - the antioxidants which provides the tea with its superpower health benefits; so not only are you consuming an excess amount of sugar, but you're not even receiving any health benefits. The verdict: The combination of the added sugar and lower antioxidants makes this version of Green Tea more harmful than helpful. Dried Fruits 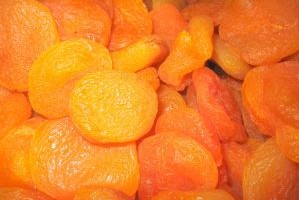 Dried ApricotsPick a fruit, any fruit and you know it has to be healthy for you. Rich in vitamins, loaded in minerals and high in antioxidants, there is no question about it, fruit is good for us! So therefore, dried fruit should be good too, right? Wrong! Here’s the scoop: while fruits are loaded with healthy substances, they also contain quite a bit of sugar. The dehydration process of dried fruits removes all the water but leaves all the sugar – turning healthy fruit into is shrunken bite-size caloric dense pieces loaded with sugar. Some food manufactures even add extra sugar to make the dried fruit taste less tart. As a result, there is about two to four times as many calories per serving in dried fruit as there is in its fresh counterpart. For instance, a cup of grapes has around 60 calories (and 14.9 grams of sugar), while a cup of raisins has nearly 400 calories and 100 grams of sugar! A cup of dried apricots has roughly 400 calories (and 23 grams of sugar) – almost four times the amount in a cup of sliced fresh apricots. Dried apples are also up there with 210 calories per cup compared to the 60 calories found in a cup of cut fresh apples and dried cranberries have 140 calories per cup while the fresh version has a mere 50 calories per cup. But of all the dried fruits, dried bananas grab first place for the most amount of calories.  With nearly as many calories and fat as a McDonald’s burger this deep fried snack has over 520 calories per serving!The verdict: While most dried fruits contain certain healthy substances, they are essentially sugar loaded candy pieces and need to be considered that way. While one or two pieces are not bad at all, most people quickly lose track of how much they are actually eating. What’s important to remember is that eating one piece of dried fruit is the same as eating the fresh version of the same fruit (i.e a raisin is a grape; a prune is a plum). For example, one fresh apricot is equivalent in calories to a dried apricot. So while we may eat one or two apricots (only 17 calories per fruit), we aren’t just going to eat one or two dried apricots – and so, that mere 17 calories can quickly turn into a few hundred! NutsNuts are one of the healthiest foods around. While they may be considered “fattening”, they are loaded with "good" monounsaturated and polyunsaturated fats as well as other essential minerals and vitamins that are healthy for our hearts and brains; unfortunately, when most people reach for a handful of nuts, it’s the greased-and-salted variety that ends up in their mouths.  While a cup of nuts has nearly a whopping 900 calories (either way it is prepared), the salted-oiled version has 12.4 grams of saturated fat and 595 mg of sodium – that's 25% of your daily value! The verdict: While nuts are healthy for you, try not to go nutty for them, as the calories can quickly add up. Always stay clear of the salted-oil kind, opting instead for a few  raw almonds, cashews and walnuts. Smoothies and Fruit Juice 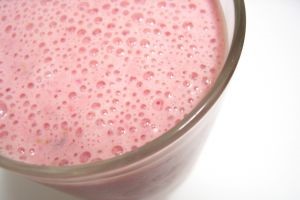 Strawberry SmoothieWith so much fruit, how could a smoothie possibly be bad for you? Unfortunately it is. Trouble comes to this tropical paradise drink when most restaurants add concentrated fruit juice and sugary syrup to the mixture, increasing the calorie count without providing any of the “good-for-you” nutrients of the fresh fruit. Some smoothie bars even add sugar-loaded sherbet or frozen yogurt to boost the flavor – sky rocketing the calorie count to nearly 1,000. Fruit juices are no saint either, as the majority of those found in the grocery store are loaded with coloring agents and sugar, which may outweigh any of the health benefits of the fruit they are squeezed from. In fact, most fruit juices have just as much sugar as a glass of soda! What’s more is that unlike eating the actual fruit, there’s little to no fiber in fruit juice, so the calories won’t even fill you up! The verdict: unless you are blending you own smoothie or squeezing your own juice, opt for the real thing- the fresh fruit!Vitamin-Enriched WaterAnother deceptive drink is none other than vitamin- enriched water. Second only to oxygen, water is by far the most important nutrient needed by our bodies to survive. With more than two-thirds of our bodies made up of water, almost every organ relies on a constant supply to function. So when food manufacturers dreamed up the idea of vitamin-enriched water, it almost seemed too good to be true. While this concept sounds good in theory, and yes it does contain vitamins, guess what else vitamin-enriched water contains- sugar! And lots of it too! The two leading brands, Coca Cola's Vitamin Water and Pepsi's Life Water both contain 32.5 grams of sugar per bottle (that's the same amount as in a Snickers candy bar!) Moreover, the nutrition label can be quite deception as a single bottle of vitamin-enriched water usually contains 2.5 servings, that means you're consuming more than twice the calories and sugar listed on the label when you drink the entire bottle! The verdict: The original is always better, so stick with traditional H2O.  YogurtRich in protein, calcium, potassium, vitamins, real yogurt boasts many health benefits. Unfortunately, the majority of yogurts found at the supermarket are packed with high-fructose corn syrup, artificial flavors, chemicals (sugar free varieties especially), processed fruits and even fat! Take for instance the classic, “fruit on the bottom” yogurt. Real fruit plus yogurt should be a match made in health heaven; unfortunately fruit-on-the-bottom flavors are often made from fruit-juice concentrates, not real fruit, which increases the sugar content without adding any nutrients. The verdict: If you want your yogurt to count as a healthy snack, not a dessert, opt for plain or even Greek Yogurt (which is loaded with protein and low in sugar) and mix in a few fresh berries or a sliced apple. Pizza 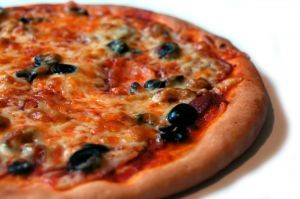 PizzaLast but not certainly not least, the ultimate dorm food/sleep over/ late night treat – Pizza! Today, pizza has become the ultimate junk food, and for a good reason. Massive amounts of cheap, fattening, artery-clogging cheeses, spread over thick crust topped off with a meager amount of processed veggies have turned this once healthy Italian classic into the icon for fast food. While in Italy, the pizza's thin crust is made from only certain types of flour, fresh tomato sauce, a proportionate amount of mozzarella, olive oil, and fresh vegetables, Pizza Hut's and Domino's version hardly comes close to mimicking this healthy Mediterranean dish. The verdict: New York style thin crust pizza wins any day of the week over Chicago's deep dish kind. The crust is one of the biggest contributors to pizza's high calorie content, so lose some crust and you'll instantly cut some of those fatty calories. Also, keep in mind that the more crust, the more cheese as fast food joints will always add extra cheese to their deep-dish pizzas.
Advertisement
Subscribe for our daily newsletter