By JPOST.COM STAFF
JANUARY 20, 2010 14:12
rain in jlem 311
(photo credit: Ariel Jerozolimski)
Advertisement
Torrential rain wreaked havoc in northern Israel on Wednesday, flooding homes, bridges and railway lines, and causing walls to collapse.Two homes, in Nahariya and Ma'alot respectively, were flooded overnight. The families were evacuated unharmed.Several streets in Nahariya were closed to traffic due to the weather conditions, including Herzl, Masarik and Nurit.There were delays in train service between Narahiya and Haifa, while only one line was operational from the Hof Hacarmel Station southbound. 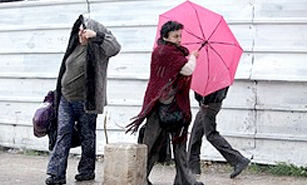 Meanwhile, two supporting walls on 's Tzahayon and Bar Yehuda streets respectively collapsed due to the stormy conditions. No one was injured.Sewage covers made of concrete were blown off by the water pressure in the city, creating little geysers in the streets.Some people reported water as high as 40 centimeters inside their homes.Also Wednesday, snow was falling steadily on Mount Hermon. The snow was expected to continue falling over the next few days.In the South, more rain was expected, but the rest of the week was not forecast to be as pluvial as the last few days.
Advertisement
Subscribe for our daily newsletter