A revolution in the haredi community

With societal factors deterring ultra-Orthodox women from obtaining the knowledge and care they need to prevent and treat breast cancer, a grassroots effort is making headway. 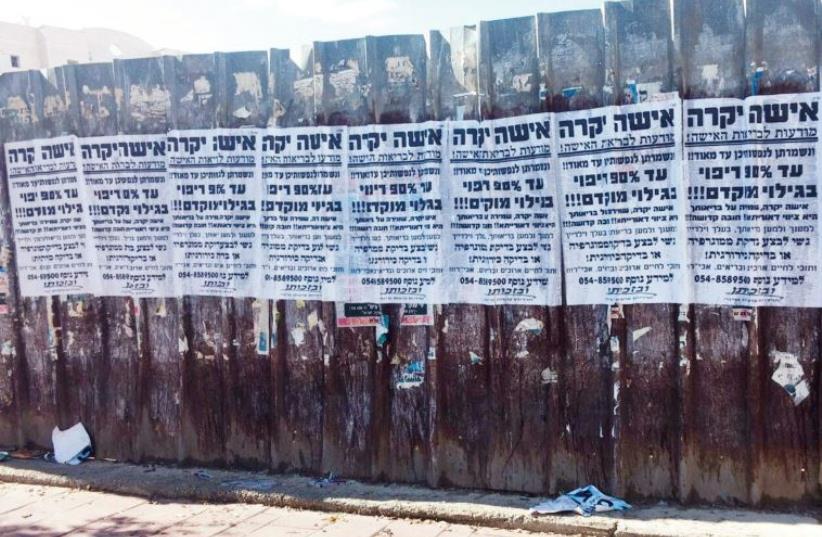 U’Bizchutan founder Ruth Colian (photo credit: RUTH COLIAN).
When being interviewed on a haredi radio station, she began to talk about breast cancer awareness. The interviewer raised his voice and said, “If you speak of immodest things, I will end the interview!” In a later interview, Colian asserted, “I cannot bear that there are women feeding their children, cooking, working, cleaning, going through life, unaware that they will be dead in a month. And for no reason! Early detection gives options and saves lives. We deserve better. My daughters deserve better.”She decided to raise awareness by printing posters in the haredi style of pashkevilim – black and white posters – and hanging them throughout haredi neighborhoods. She had a plan but no funds. However, she found a donor willing to front the money so that she could get the posters printed in time for Breast Cancer Awareness Month in October.The donor mentioned my name to Colian as someone active in the community and familiar with fund-raising. Aware that this issue is dear to many people, I wrote a blog post and crowd-funded. I also turned to Karmey Chesed, the organization through which I had raised funds for a family – victims of terror who were on the verge of losing their home.Karmey Chesed supports individuals and families in need who have exhausted all other avenues. Its freecycling program gives spare goods and furniture to needy families throughout the country. Karmey agreed immediately to be our conduit so that people could donate easily. The sum was modest – $2,000 – and we raised it within 48 hours.True to her word, Colian made the posters calling on women to fulfill the Torah commandment to protect their lives and get medical checks, including a phone number for more information. More than 200 calls were received from both women and men.When asked what she learned from the calls, Colian said it seemed that things were worse than she’d thought.“How can a woman who has had six children and reached the age of 42 not know what a mammogram is? It is unacceptable to not prepare a woman to take care of her health. Schools, communities, seminaries – we must talk about these things,” she said.After the poster and campaign were publicized, many people who were interested in helping came forward, including those who had tried to raise awareness in the past. A few had pushed to place self-examination cards in ritual baths, only to be told by rabbis that it was inappropriate, for if a woman were to find a lump during the exam, it would ruin her mikve night.In a hopeful sign, an attendant recently asked by this writer to consider putting information about breast cancer at the mikve said she would be grateful for material, as she recently spoke with a few women whose cancer was recurring and realized that information was vital.The good news According to Hala – The Rachel Nash Jerusalem Comprehensive Breast Clinic, there has been a constant rise in the number of haredi women coming in for examinations. Hala is the leading breast cancer diagnostic center in Israel, offering full, comprehensive screening that can detect breast cancer at its earliest stages.Hala has checked more than 55,000 women of all religions and backgrounds over the last three years.During the past year, some 18,450 women were checked there. This is 4.54% of the total women checked in Israel for breast cancer annually, with Hala diagnosing nearly 8% of the approximate 4,400 cases of breast cancer diagnosed in the country each year. Hala’s ratio of discovery and diagnosis is so high because of its protocols and methods that use cutting-edge technologies; a team of excellent breast imaging experts; and its being a national referral center for symptomatic women.Every woman is checked by the most sophisticated imaging modalities and is examined by an expert who also performs a clinical examination and an ultrasound study. Hala sees women of all backgrounds.The data reveals that in the haredi population and the Arab religious population, the women coming in are older, and those diagnosed often have a more advanced stage of cancer.In Israel today, the standard is for a woman with no family history of related cancers to start to get mammograms – covered by the health basket – at age 50, while those with a family history or other high-risk factors are told to start at 40 or younger. Statistically, 25% of the women diagnosed in Israel with breast cancer are under 50.As a result of his recent visit to Hala, upon the expansion of the clinic and inauguration of a new Walder tomosynthesis unit, Health Minister Ya’acov Litzman related to the topic of breast cancer and announced that he would consider lowering the age of recommending mammography in Israel to match the international trends for early detection. He specified that a committee of experts would investigate the matter and offer their recommendations.“Even if the implementation of their recommendations will bear high costs on the health system, the suggested change will be made to lower the age at which mammograms are covered by the health basket to 40,” he said. 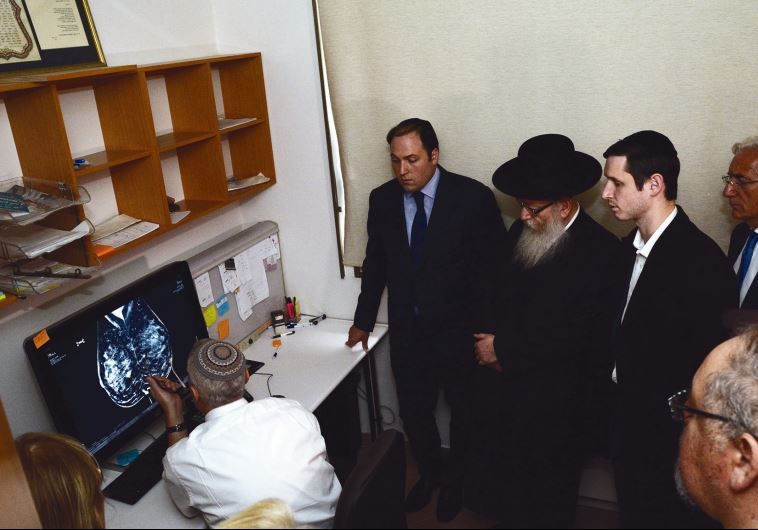 Health Minister Ya’acov Litzman (second from left) sees the technology in action during his recent visit to Hala, upon the clinic’s expansion and inauguration of a new Walder tomosynthesis unit (photo credit: SHLOMO GOLDFARB).
Dr. Michael Messing, a breast imaging expert at Hala, feels that the haredi community, as well as the government, must do more to educate women about breast cancer and how to get tested for it. By not being exposed to mainstream media or any medium that discusses the disease, women have no way of learning about it unless the community provides the information and doctors are told to tell every young woman what to look for, when she should be tested and to be aware of family history. He says the Health Ministry should put forth efforts to ensure that these communities are reached.Messing describes some patients who refuse to be examined by male doctors, and others who just didn’t know to go for an exam.Hala has three female doctors on staff for women who want to be examined by a woman. The organization opens its doors to every woman, regardless of social status, race, religion or financial status, providing patients with same-day results of the screening.If needed, immediate non-surgical needle biopsies are conducted as part of the procedure, with results generally back within a few days.Beit Natan is an organization that provides cancer support and offers physicians and medical staff training on how to work with haredi women in the community. Based on decades in the field and intensive research into the issues, Beit Natan recommends a simple but potentially effective approach to ensure that women receive the information and exams they need to diagnose breast cancer in time: Nurses should be trained to speak to women about breast cancer and advise them to ask their doctor for a breast exam and further information. This informs and empowers the patient to be in charge of and proactive in her health.In addition, Beit Natan suggests that physicians be trained in culturally appropriate breast exams so that the ultra-religious population can feel at ease when discussing a potentially difficult topic.NO WOMAN should die of breast cancer that has gone undetected, whether due to ignorance, misconceptions about modesty, fear of loss of marriageability for their children or the idea that having a medical examination is “looking for trouble.”Guarding one’s life is a positive commandment, one that should be encouraged strongly by rabbinic and communal leadership and enabled by the state and private health institutions. It is high time that all women – secular, religious, Jew and Arab – be educated fully on how to protect their lives.Colian is continuing her quest to educate the haredi public about breast cancer and is working on finding other avenues and partnerships to reach deeper into communities, including those that speak only Yiddish.And Karmey Chesed, Hala and Beit Natan are working within the neediest populations, a concerted effort worthy of great respect and admiration. Those who would like to take part in Ruth Colian’s continuing efforts may contact her at bizhutan@gmail.com.