A-Tur is considered one of east Jerusalem’s major neighborhoods by virtue of its population. 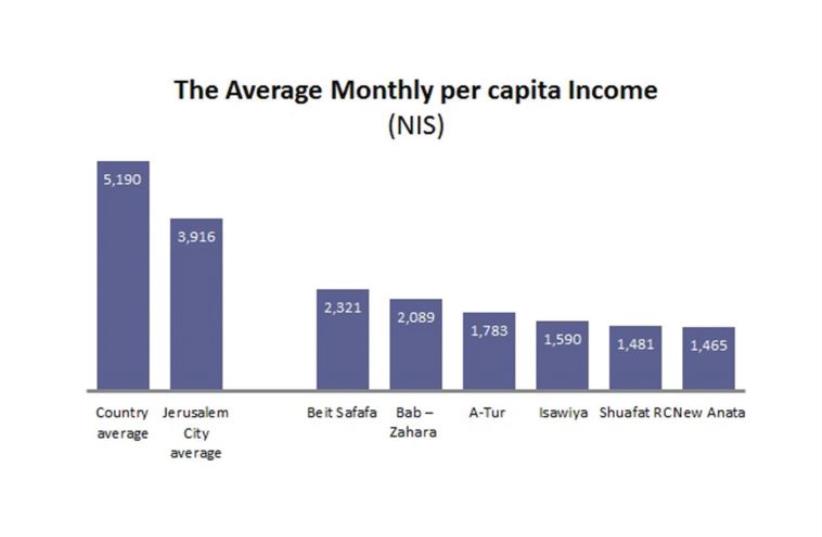 The average monthly per capita income (nis)
(photo credit: JERUSALEM INSTITUTE FOR ISRAEL STUDIES)
Advertisement
The Arab neighborhood of A-Tur, located in east Jerusalem on the Mount of Olives, is distinguished by both its many religious and historical sites of importance to the three religions – including the Church of All Nations and the Mount of Olives Jewish Cemetery. Likewise, the neighborhood is a focal point for healthcare needs, with the Mokassed and Augusta Victoria hospitals. The neighborhood has a residential population of 24,320 (as of the close of 2013). The overwhelming majority are Muslim, with a total of 80 Christian families.In 1945, towards the end of the British Mandate, A-Tur had a total of 2,800 residents; by 1961, during Jordanian rule, it had 4,300 residents. From 1967 to 2013, the population increased by more than a factor of 4.5.
Read More...
A-Tur is considered one of east Jerusalem’s major neighborhoods by virtue of its population; only Beit Hanina (35,810 residents), the Old City’s Muslim Quarter (28,180), and Ras el-Amud (24,640) have larger ones. The median age for the neighborhood is 21 years, slightly higher than that for all east Jerusalem neighborhoods (20). The Arab neighborhood with the highest median age is Abu Tor (25); the lowest is Sur Bahir (16).In economic terms, A-Tur is ranked in the third cluster of the city-scale socioeconomic index of the Central Bureau of Statistics (the lowest cluster is 1 and the highest 20, based on the 2008 census). All the Palestinian neighborhoods in east Jerusalem are in clusters 2 to 5, the lowest quartile. Only two areas are ranked in cluster 5: the neighborhood of Bab a-Zahara and the Old City’s Armenian Quarter The average monthly per capita income in A-Tur is NIS 1,783, comparable to the average for Arab neighborhoods (NIS 1,735); the city average, meanwhile, is NIS 3,916, while the country average is NIS 5,190. The Arab neighborhoods with the highest average monthly income are Beit Safafa (NIS 2,321) and Bab e-Zahara (NIS 2,089); while the area of “New Anata” (NIS 1,465) and the Shuafat refugee camp (NIS 1,481), both of which are beyond the security barrier, have the lowest income levels.On average, east Jerusalem residents of Arab neighborhoods aged 25 to 54 have 11 years of education. This is also the average for A-Tur, and is lower than the Israel-wide average (13 years of education).Among A-Tur residents, 13 percent have an academic degree – lower than the average for Arab neighborhoods (17%) as well as the average for the city (28%) and the country (30%). • The analysis is based on data of the Central Bureau of Statistics, the socioeconomic index of the 2008 Census and data from the JIIS Statistical Yearbook of Jerusalem.Translated by Merav Datan.