In Israel, crosswalks are based on an honor system that’s not quite black and white. 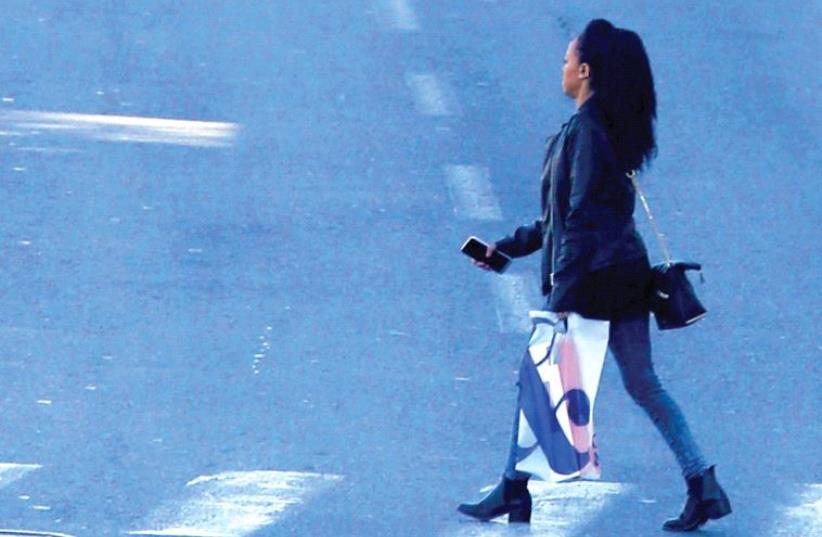 A woman crossing a road (illustrative)
(photo credit: MARC ISRAEL SELLEM)
Advertisement
When I moved to Jerusalem from New York more than a year ago, I was struck by this city’s reliance on zebra crossings – white-striped pedestrian walkways that traverse Jerusalem’s busy, car-choked streets like gauze. In many spots there are no traffic lights signaling cars to slow down or stop. It’s up to drivers to notice if there is someone waiting to cross.In New York, crosswalks are governed by traffic signals, and drivers must stop on red whether or not there are any pedestrians in sight. (That’s not to say that the law is always obeyed.) Here, however, zebra crossings are based on an honor system that’s not quite black and white. How close to the crosswalk does a pedestrian have to be to warrant an approaching vehicle to stop? What if a person is approaching the crosswalk but is still a few steps away? That judgment call is left to drivers. And a lot rides on their exercise of discretion.The level of human trust built into the system became all too real for me recently when I was hit by a minivan while making my way across one of those perilous zebra crossings.
Read More...
It was a weekday morning in an area with many schools, and thus lots of parents and children afoot. I was holding my four-year-old’s hand on my right side, on our way toward her gan, as we began crossing Rahel Imenu Street, a heavily trafficked, two-way road in the German Colony. We were about a third of the way across when a minivan suddenly barreled straight down the street from the left at full speed. I didn’t even notice the vehicle until it was practically upon me. It hit my left leg, throwing me about a meter. I screamed. My body began shaking from shock. My daughter was unscathed but very frightened.The driver got out and began apologizing. “It was too sunny,” he said.“I couldn’t see you.” He was clearly rattled. I heard his own children crying in the back seat.Miraculously, I was not seriously injured – bruises, swelling, significant pain in my leg that still recurs, but nothing catastrophic. The bigger miracle, however, is my daughter: Had she been on my left side, she would have borne the van’s impact, with unthinkably devastating results.It’s not easy to peel away the layers of the everyday hustle-bustle that fills so much of our time, and engage in true introspection. Though no one wants to have a close brush with tragedy, events that shake us up, physically or otherwise, help crystallize our focus. They remind us that we need Divine Providence to make it through each moment, each day. But crossing the street should not be such risky business.Increased awareness is all it takes to improve pedestrian safety and prevent accidents. Since being hit, I’ve had at least half a dozen close calls where drivers failed to slow down or stop at a zebra crossing. At crosswalks, I now try to make eye contact with approaching drivers and sometimes literally hold my hands out as a signal as I walk. I’ve also become a more careful driver – the fear of hitting someone is as unsettling as the fear of getting hit myself.As a driver, I know how Jerusalem’s glorious morning sun can completely flood one’s vision, making it impossible to see pedestrians at a crossing. And with the rainy season upon us, visibility will rarely be perfect. Of course, the corrective for that is to slow down, not zoom on through like the driver who hit me.The accident was apparently a wake-up call for him as well. He seemed like a decent man. He texted a few times the first day, and several the day after, wanting to apologize again. He is extremely fortunate that his mistake did not have grievous consequences, because then he, too, would have a much heavier burden to bear.The thought of spending a lifetime tortured with guilt for maiming or killing a person by our own negligence should be enough to make all of us slow down behind the wheel, especially at zebra crossings.The writer made aliya with her family from New York to Jerusalem in 2015. She is a busy mom, a freelance writer and editor, and previously worked as a court attorney and magazine editor.