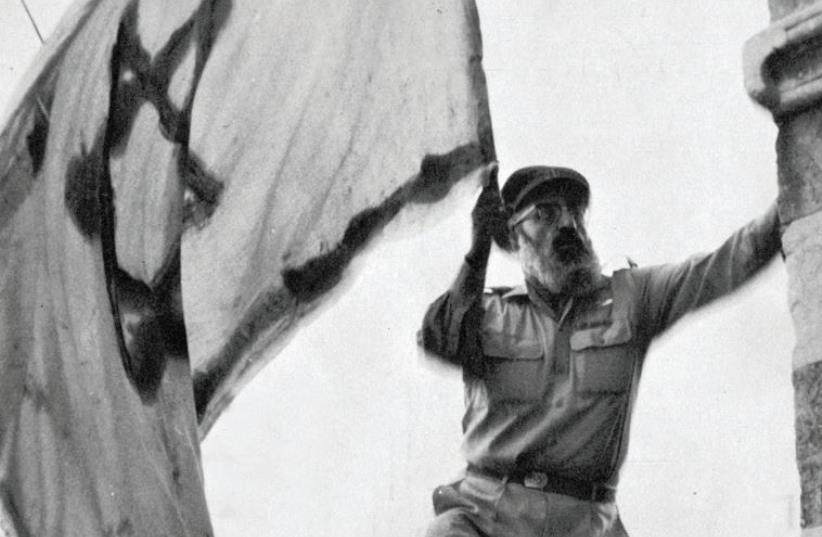 Almost singlehanded liberation: IDF chief rabbi Shlomo Goren waves the flag in Hebron
(photo credit: JEWISH COMMUNITY OF HEBRON)
Advertisement
While our holiest city unfurled its flags for Jerusalem Day on June 5, the next day our “second holiest city” celebrated Yom Hevron (Hebron Liberation Day).One of the many striking photos of the Six Day War comes from June 7, 1967, showing IDF chief rabbi Shlomo Goren blowing a shofar at the Western Wall, newly freed after 19 years of being inaccessible.Goren apparently had a busy week, because the next day he ventured south to join with the army’s effort to take Bethlehem, Hebron and Gush Etzion. What follows is the unexpected story of how the rabbi practically singlehandedly liberated the city and became the first Jewish person in 700 years to enter the Tomb of the Patriarchs as a free man.As told in his autobiography With Might and Strength (in Hebrew) and in numerous interviews, Goren intended to catch up with the IDF in the morning to venture south; but upon awaking, he found he was alone. Assuming the army had gone ahead without him, he and his officially designated IDF driver rushed to catch up with them in Hebron – not knowing the army had taken a different route.Unwittingly, Goren and his driver arrived alone into what was then enemy territory.As they drove in, they saw white sheets hanging from the balconies and rooftops of the buildings, a sign of surrender.On June 9, a day after the liberation of Hebron, the Jewish Telegraphic Agency wrote: “Israeli Jews may soon have more noted shrines to visit, including Rachel’s Tomb near Bethlehem and the historic burial cave at Hebron. Rabbi Shlomo Goren, the army chief chaplain, holding the Torah scroll he used yesterday in leading services for Israeli troops at the Wailing Wall, proceeded to Rachel’s Tomb, where he prayed, and then to Hebron, where he became the first Jew to enter the cave proper. Even before the 1948 War of Liberation, the Arabs barred Jews from entering the cave where Abraham, Isaac and Jacob are buried. Now it is open to Jews again.”The banning of Jews from the holy site was well known, dating back almost exactly 700 years to the time of the Mamelukes in 1267. Only in rare circumstances with prior written consent of Turkish authorities and/or an exorbitant fee were Jews allowed into the burial site of their ancestors. They were relegated to what was known as the “seventh step” of a staircase leading into the towering walls built over the ancient burial cave by King Herod – with great stones mirroring the Western Wall style of Herodian architecture.This ban is documented, for example, in a June 27, 1947, Canadian Jewish Chronicle article titled “UN Commission tours Palestine until July 3,” which states, “On Saturday the Commission visited the Arab town of Hebron... and the cave of Machpela, biblical burial place of Abraham, Isaac, and Jacob, and their wives, which is now a mosque and is forbidden to Jewish visitors. Jewish journalists… were forced to wait outside while the members were in the cave.”Praying at the seventh step of course took place before the bloody Hebron massacre of 1929, after which the surviving Jews were forced to leave. Thus, while Jerusalem was divided and the Old City cut off, Hebron was completely off-limits for Jews.The more than 700,000 tourists who visit Hebron every year can still see the bullet holes on one of the entrances to the Tomb of Patriarchs complex where Goren attempted to enter. He eventually had his driver attach chains to the jeep to yank the door open. Later that day the IDF’s top brass, including defense minister Moshe Dayan and Gen. Uzi Narkiss, marched into the holy site, in a scene reminiscent of the famous photos of Jerusalem taken the day before.Hebron’s Jewish community started the 50th anniversary of the Six Day War a little early this year with a special ceremony at its annual Passover music festival. Approximately 30,000 people heard speeches by Ashkenazi Chief Rabbi David Lau, Deputy Regional Cooperation Minister Ayoub Kara and Justice Minister Ayelet Shaked, as well as recollections by those who remember the heady days back in the late 1960s.Those reminiscing included Israel Prize winner Haim Druckman, who stated he was “privileged” to be among the first to visit the city of the matriarchs and patriarchs.