This begs the question: Why aren’t haredi leaders screaming down from the mountain: “Lo ta’amod al dam rei’echa” (Do not stand idly by your brother’s blood)? 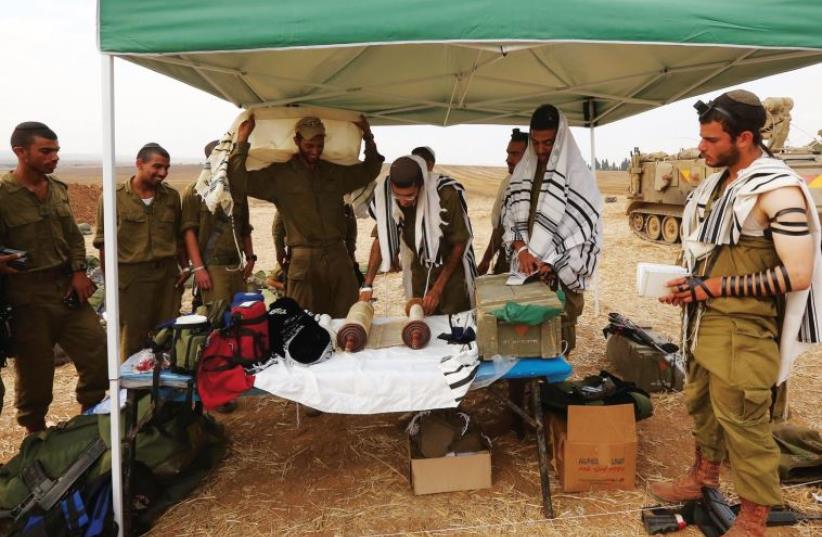 IDF soldiers pray near the Gaza border.
(photo credit: MARC ISRAEL SELLEM)
Advertisement
My son serves in a unit with a former haredi bocher (young man) who is now shunned by his community; even his own father has disowned him. His mom is proud of him, though she dares not admit it. This young man explained that he can’t sit in the beit midrash (Torah study hall) all day, as he has an adventurous spirit (and would like to earn money one day). After the army, he plans to enroll in university – though how he’ll do it without the educational background is beyond me! I was thinking there should be a nationwide movement to adopt such individuals. After all, he no longer has a real home to go to. Your column seems a good place to launch such a concept. What do you think?
– A mother of a son with a friend in need Tzippi Sha-ked:
While it’s tragic when haredi soldiers are shunned from their own community, it’s much worse when these soldiers are vilified and physically attacked by homegrown ruffians. This begs the question: Why aren’t haredi leaders screaming down from the mountain: “Lo ta’amod al dam rei’echa” (Do not stand idly by your brother’s blood)? Haredim attacking soldiers is but one transgression among a slew of others. Haredi leaders need to “remove this horror from their midst” (uviarta hara mikirbecha) and demand aggressors be punished.It is not enough to pray for a spirit of awakening to sweep over haredi leaders so that they speak out against shunning; other citizens must step up to the plate as helping hands. Today, for example, secular-run companies accommodate haredi employees so they feel comfortable working. Presumably, these employees are not shunned by their communities; hopefully, this will soon prove true for haredi soldiers as well. Until such time, we should regard them as lone soldiers and pair them with adoptive religious families, preferably haredi, who support their army service.You are right to be concerned about this soldier’s educational background.Recently, 53 formerly religious students, represented by the group Out for Change, sued the government for damages based on their lack of secular education. However, there are ways for this young man to catch up. Instead of waiting for government to legislate changes such as imposing a core curriculum, let’s offer free tutoring, friendship and a safe harbor to these brave haredi lone rangers.
Danit Shemesh:
The idea of “saving the poor haredi boys” smacks of sanctimoniousness.Quoting “Give me your tired, your poor, your huddled masses yearning to breathe free” out of context undermines the ultra-Orthodox choice of education and is undemocratic. While being supportive may be virtuous, the soldier has parents who love him, who educated him to be an upright citizen in our community, the community they chose for his future. The army environment is often incompatible with our education. Exposing our children to army life is akin to making a scrumptious cake for someone allergic to sugar.Every community has its dropouts; there are ba’alei teshuva who cross over from the secular to “our” side. Should we adopt them, tell them they are “orphans” and impress upon them that their parents are remiss? Can you imagine the reaction to that? Having said that, I call on my haredi brethren to listen up: when you don’t embrace your child, someone else will! If our children are not carbon copies of us, does that make them less our children? Why does this mother’s support for her son need to be hush-hush? There is no good substitute for parents.If we are true to our lifestyle decision that Torah is not to be “admired” but to be breathed and lived, we should view our children’s queries as an obligation to reexamine the way we educated them. We must always separate the behavior of our children from their essence and support them regardless of their choices.
Pam Peled:
Recently, on the plane coming home from London, a young British haredi mother in a fetching blond wig overheard me discussing religion and the Israeli army with a friend. Holding her young son on her knee, she excused herself for interrupting and delivered the usual pitch for haredi army avoidance.With no fear of contradiction she declared Israel needs both physical soldiers and spiritual help; prayers from yeshivot throw an Iron Dome of sanctity around the Holy Land, keeping us all safe.How do you argue with that? I suggested that haredi parents are the cleverest kids in the class: They have a fail-safe way of keeping their children out of harm’s way while ours risk their lives to protect us all, including the ultra-Orthodox. This thought did not go down well.I don’t think the answer lies in a nationwide movement to adopt individual haredim who serve in the army.I think the time has come to demand that all haredi boys (and, dare we say it? also girls) serve, as is mandatory for all other young adults (except for Israeli Arabs, but that’s another issue).As I’ve mentioned before, we (still) outnumber the haredim, we pay our taxes, we work, we do our national service.It’s high time we insist they do the same.In the meantime, sure; let’s support the brave boys who venture out of their closeted world to join their brothers-in-arms.May the time speedily arrive when nobody needs to fight ever again.  Comments and questions: 3ladies3lattes@gmail.com