Commemoration ceremonies were held all over the United States on Friday. 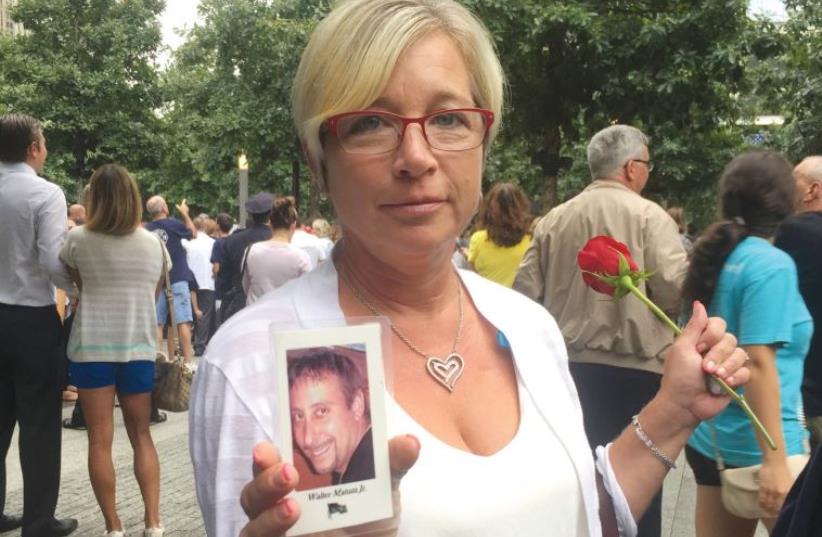 DENISE MATUZA holds her husband’s picture at the memorial on Friday. He died in the North tower 14 years ago
(photo credit: DANIELLE ZIRI)
Advertisement
NEW YORK – Eric Kondratenko, 69, a contractor from Romeo, Michigan, went to work early on September 11, 2001. Around 9 a.m., the truck drivers where he worked delivered the news: A plane had hit the World Trade Center in New York City.Fourteen years later, Kondratenko sat near a tree at the 9/11 Memorial in Manhattan, waiting for the annual tribute ceremony to begin. He attends the event every year, in memory of his daughter Suzanne who was killed in the attacks.Suzanne, 27, was based in Chicago, but since April 2001 she had been flying to New York regularly for her job. She was due to come home on September 12, for her sister’s wedding shower.“She was on the 92nd floor of the South tower, working as a consultant. She worked for Keane Consulting Group,” Kondratenko told The Jerusalem Post, holding a picture of Suzanne, displaying a wide smile, youthful rosy cheeks and neatly applied red lipstick.“Her co-workers called her a spitfire,” he said with a smile, “She was full of life.”On that day, as the plane hit the North tower, Suzanne and her colleagues decided to leave their desks and make their way down the South building.“On the 74th floor there was a platform, where you switch elevators, and there they were told to return upstairs, that they’d be safe,” her father explained. “The number 74 is also stuck in my head because that’s the year she was born. March 3, 1974.”Kondratenko and a few dozen other relatives of 9/11 victims gathered at the memorial site on Friday. Over the years, the amount of people attending the ceremony has gone down significantly.The official ceremony begun with a moment of silence at 8:46, the time when American Airlines Flight 11 crashed into the first tower. Family members read out the names of the nearly 3,000 fatalities, and observed moments of silence marking events that unfolded that day, 14 years ago.Denise Matuza and her three sons, from Staten Island, came. Matuza’s husband, Walter, worked as a telecommunications analyst in the North tower.“We love coming down here, we love to get together with everybody that’s in the same situation as us,” she said. “This is peaceful for us, it’s not stressful. This is where we do find peace.”Denise and her family have found some peace in their bond with other families of 9/11 victims, but the memory of that day remains vivid.“My best friend called me and said that a plane had hit the towers,” Matuza recalled, “Walter was in the towers, he had to get out.”Soon, Walter Matuza called. He didn’t seem too worried. He had already gone through the 1993 World Trade Center bombing and seemed confident he’d manage to escape.“He said that he was gonna get out and he was coming home, but he never came home,” Denise told the Post.The next day she found an email her husband had sent her from his office before he died.“He said that he couldn’t get out of the building, that the doors were locked and that they were waiting for the firefighters to come rescue them, and that was it,” she said.“Some parts it feels like yesterday and some parts it feels like it happened so long ago,” Denise said, “The kids will never get over it. You just learn to move on, to do new things, you learn to adjust.”It took almost a decade to finish the construction of the 9/11 Memorial. It is composed of two square pools, representing the fall of the twin towers.On the edges, engraved in bronze, are the names of those who died.The barriers surrounding the pools were recently taken down, and the site turned into a public space.“We don’t like that it’s become a tourist attraction,” Matuza said. “People come here, they take pictures, they eat, they sit around, but it’s not a happy thing to be here, it’s a place to memorialize those we lost.”Commemoration ceremonies were held all over the United States on Friday.In New York, the largest free-flying American flag in the world, 90 feet (27.4 meters) by 60 feet (18.3 meters), was displayed on the George Washington Bridge for several hours.