By DANIEL K. EISENBUD
UKRANIAN OLIGARCH Zvi Hirsch (Gennady) Bogolyubov poses in the excavated educational center he spent millions to finane in the Western Wall Tunnels Sunday.
(photo credit: MARC ISRAEL SELLEM/THE JERUSALEM POST)
Advertisement
The Western Wall Heritage Foundation unveiled on Sunday a fully excavated and restored grand hall dating back to the 14th century in the tunnels under the Muslim Quarter in Jerusalem’s Old City.The hall, which has been converted into an educational center, cost millions of dollars and took 10 years of careful oversight by the Antiquities Authority (IAA) to complete. 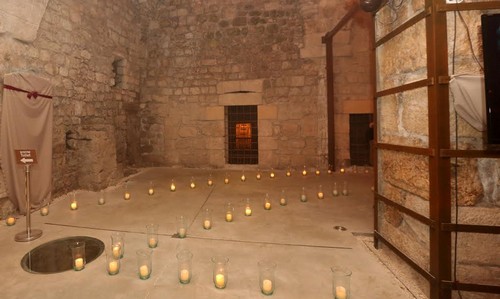 According to the IAA, the excavation – funded entirely by Jewish Ukrainian billionaire Zvi Hirsch (Gennady) Bogolyubov – focused on five separate areas below the Ohel Yitzhak Synagogue, which extended into spaces beneath the homes of Palestinians living east and south of the synagogue.“The IAA unearthed an area that includes several structures, among them the continuation of the 14th-century Hammam al-Ein, a wide domed area from the same period, and remains dating back as far as the 1st century CE,” an IAA official said in a statement.“Although the majority of the finds are undoubtedly from the Mamluk period, identified with Muslim rule in Jerusalem, the educational visitors’ center will address the genealogy of the Jewish nation and its connection to Jerusalem.”Bogolyubov, an industrialist and leading Jewish philanthropist originally from Dnepropetrovsk, Ukraine, currently based in London, is estimated to be worth over $10 billion and paid approximately $20 million to excavate the site, as well as the four others nearby.Since acquiring his fortune in the late ’90s through a banking, oil, media and food empire, the billionaire has supported a number of major Ukrainian, Israeli and British Jewish charities, including the construction of the largest Jewish center in the world, located in Ukraine.Asked why he donated the millions needed to excavate and restore the underground areas in the Old City, Bogolyubov cited his love and patriotism for Israel.“I did this because of my strong belief that Jews all over world can feel safe because of the State of Israel,” he said at the catered gala unveiling, which he attended with his wife and four young children.“Everyone must contribute what they can – some contribute by joining the army, some by national service. I did what I can do.”According to the IAA, the hall – adorned with highly stylized arches which stand on broad, tall stone pillars – was first detected underground adjacent to the Western Wall Plaza and revealed a window to aqueducts from the early 14th century.“On the side of the structure, a staircase from the Herodian period, a section of a Roman road, and even a bathing house from the Mamluk period can all be found,” the official said.“There can be no doubt that this hall represents the wide range of history to be found between the stones of Jerusalem.”To dig below the Old City’s Muslim Quarter, IAA officials first had to receive permission from the Palestinian residents living above the sites, as the excavations must be conducted vertically.“The professional reason for abstaining from horizontal tunnel excavations is that archeological excavation must be done vertically, starting from the surface of the earth and digging into the depth,” the IAA noted.“Otherwise, it is difficult, and often impossible, to understand the significance of finds and to describe the remains that are exposed.”Although living in London, Bogolyubov remains president of Dnepropetrovsk’s Jewish community.