'Terrorists entered a terminal with explosives, this is a colossal security failure' 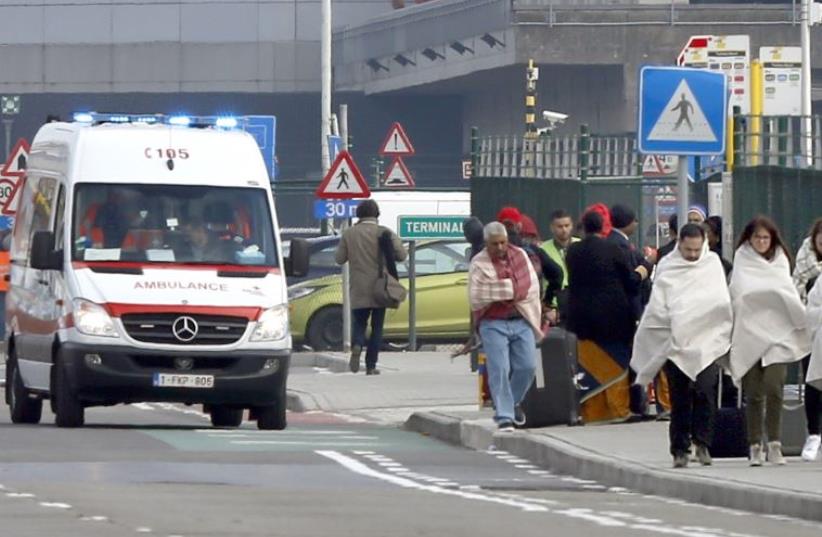 People wrapped in blankets leave the scene of explosions at Zaventem airport near Brussels, Belgium, March 22, 2016.
(photo credit: REUTERS)
Advertisement
BERLIN/PARIS - Twin explosions in the departure hall of Brussels Airport prompted several countries worldwide to review or tighten airport security on Tuesday and raised questions about how soon passengers should be screened when entering terminals.Islamic State claimed responsibility for bomb attacks on Brussels airport and a rush-hour metro train which killed at least 30 people.Prosecutors said the blasts at Zaventem airport, which serves more than 23 million passengers a year, were believed to be caused by suicide bombers.Authorities responded by stepping up the number of police on patrol at airports in London, Paris and Frankfurt and at other transport hubs as Brussels rail services were also halted. Airlines scrambled to divert flights as Brussels airport announced it would close through Wednesday.In the United States, the country's largest cities were placed on high alert and the National Guard was called in to increase security at New York City's two airports.The Obama administration was expected to announce new measures to tighten US airport security.A United Nations agency is already due to review airport security following the downing of a Russian airliner in Egypt by a makeshift soda-can bomb in October last year. Islamic State has claimed responsibility for smuggling the bomb on board.Other recent incidents have also raised questions about how planes are protected. Last month, a bomber brought a device onto an airliner in Somalia and blew a hole in the fuselage. A year ago, a disturbed pilot deliberately crashed a Germanwings airliner killing 150 people, exploiting anti-terrorist cockpit defenses to lock himself at the controls.But there has been less attention focused on how airports themselves are secured, before passengers check in for flights, despite a number of attacks."It strikes me as strange that only half of the airport is secure. Surely the whole airport should be secure, from the minute you arrive in the car park," said Matthew Finn, managing director of independent aviation security consultants Augmentiq.In 2011, a suicide bomber struck the arrival hall at Moscow's Domodedovo airport, killing 37 people. In 2013, a shooter killed a US government Transportation Security Administration officer at Los Angeles international airport. Another gunman killed two there in 2002.The last major incident at a western European airport was in 2007, when two people tried to drive a jeep packed with propane canisters into the terminal at Glasgow Airport in Scotland. One of the attackers died.Several airports afterwards stepped up security for cars, but entrances have largely remained open for those on foot.CHECKPOINTSThe relative openness of public airport areas in Western Europe contrasts with some in Africa, the Middle East and Southeast Asia, where travelers' documents and belongings are checked before they are allowed to enter the airport building.In Turkey, passengers and bags are screened on entering the terminal and again after check-in. Moscow also checks people at terminal entrances."Two terrorists who enter the terminal area with explosive devices, this is undoubtedly a colossal failure," Pini Schiff, the former security chief at Tel Aviv's Ben-Gurion Airport and currently the CEO of the Israel Security Association, said in an interview with Israel Radio.In the Kenyan capital Nairobi, where authorities are on high alert for attacks by Somali-based al Shabaab militants, passengers have to get out of their cars, which are then searched, at a checkpoint a kilometer from the main terminal.In Nairobi and other airports such as the Philippines capital Manila, passengers also have to present their passports and have bags X-rayed to gain entry to terminal buildings."I find that checks in front of buildings, such as those at government buildings in the United States, would be 100 percent fine," said Ralf Leukers, a passenger at Frankfurt airport."If you don't have anything to hide, then you should be happy to have your bags searched."But such checks could create upheaval at terminals and rely on security staff paying close attention."Any movement of the security 'comb' to the public entrance of a terminal building would cause congestion, inconvenience and flight delays, while the inevitable resulting queues would themselves present an attractive target," said Ben Vogel, Editor, IHS Jane's Airport Review.A group representing Europe's airports said kerbside screening would "be moving the target rather than securing it."Augmentiq's Finn said governments should make greater use of modern technology that allows for discreet screening of passengers as they pass through gates or revolving doors."This is not unique to Brussels; this is a global phenomenon. We have got to effect the right kind of change, otherwise we will be scratching our heads over why the same questions are being posed and not being answered," he said.But adding pre-terminal screening and other measures at airports would be costly."I don't see it happening anytime soon," said Daniel Wagner, CEO of Country Risk Solutions, a security consulting firm in Connecticut in the United States. "There's no sense of urgency and not enough money devoted to the problem."