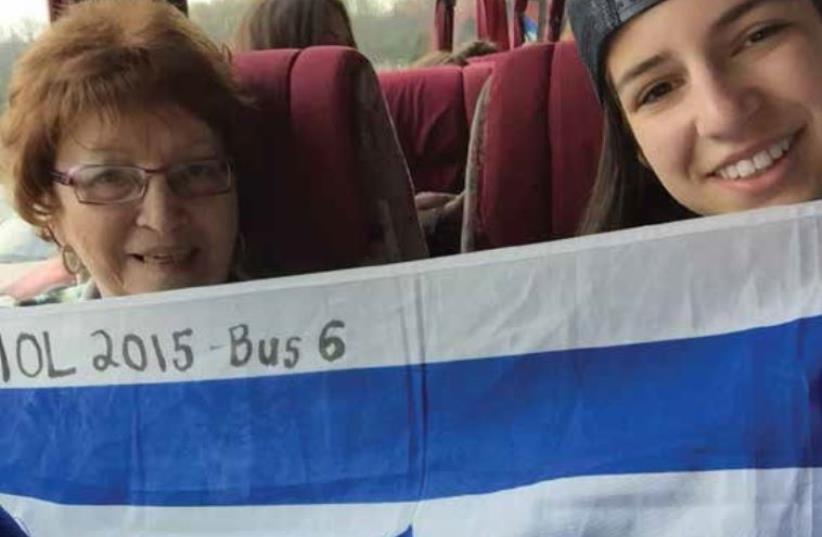 Emmy Gnat, Canada.Sharing sorrow and joyHOW CAN I begin to express what I’ve been through the past week? I’ve just returned from Poland, after what felt like a whole lifetime. A journey in the footsteps of my family, visiting sites where there once existed a flourishing Jewish life, a life that was exterminated in the ghettos and concentration/death camps that I’ve just seen the remnants of.During this trip I’ve tried to comprehend the incomprehensible: to fathom what went on during the Holocaust and what sort of life existed in my grandfather’s homeland before the war made everything Jewish in Poland a historical artefact, something that seems as if it existed centuries ago.During this week I have seen synagogues that have been turned into museums since there are no Jews left to gather there, cemeteries where the death year marked at the graves stop at 1939 since the next generation was never buried. I have seen mass graves in the forests where an entire village’s Jewish population was shot and buried, some of them still alive.I have seen the death camp Treblinka, a veritable death factory - where the number of people killed equals the size of my whole hometown, Stockholm. Its only trace is an open spot in the forest, it has a monument of hundreds and hundreds of stones you’d think represent each killed person, when in fact they’re representing each village or city where Jews were killed - the bigger the size of the stone, the bigger the city.With thousands of other Jewish groups from all over the world, we marched a “March of the Living” as the trip itself is called, from Auschwitz to Birkenau. More than 10, 000 of us marched together – as an inverted version of the death marches where the Nazis would have people walk 24/7, until they fell down of exhaustion and died, or were shot for slowing down.But we could gather on the lawns of Birkenau in the blue jackets we all had - to show that we are alive, that Jewish life goes on and to honor the life of our murdered families.Most importantly, it was an inspiring feeling to see so many of us there and to know that we, unlike them, could walk away as free human beings, to leave those horrific sites still alive. Yet, once more, it was impossible to grasp that the sum of all of us there, 10 000 people, was the equal amount of people being killed every at that very place, 70 years ago.We visited Majdanek, another concentration and death camp. With the city of Lublin as backdrop, masses of people were killed and the smoke from their burnt bodies covering the skies above the heads of the Poles. Nowadays, this is the only site in Poland where we could still see an intact gas chamber, the Zyklon B gas used to kill our families still leaving its blue color on the walls.One of us had a grandfather who managed to escape those very gas chambers we were looking at. He survived that camp, and several others, as well as a death march. His story and another incident, reminded us that the fight against antisemitism is not a historical one. In the first case, right upon returning from the trip, the first news I was reached by was that neo-Nazis had entered the room in the school where he, now 88 years old, was giving a speech about his experiences.In the second case, we had just been visiting the site of the Warsaw Ghetto, including the site of the ghetto uprising. Walking away from there, for the first time in my life, I saw two people stretching out their arms in a Hitler salute directed towards me and our group.After all we’d seen that week, their gesture was silently saying that they agreed with all of it, that they believed that we too ought to be killed just for being born Jews.We’ve seen a number of memorial monuments and in the biggest book I have ever seen, all known names of Jewish Holocaust victims were collected. There I found several people sharing the names of my family members, as well as my own name. That made it perfectly clear that it really could’ve been me. And it could still be me, or you – if the people who live to hate and create false differences between people are allowed to do so.Finally, apart from the sorrows we’ve shared, we’ve also shared an incredible amount of joy. We have laughed, danced, sung and celebrated Jewish traditions in the best of spirits, alive as we are. I strongly recommend everyone to do the same kind of trip, because although I’ve tried, this cannot be retold, it has to be seen. It’s the worst and the best trip I’ve done.Thank you to all my new beloved friends for making this trip what it was. Let’s never forget.

Hannah Laustiola Frydman, SwedenThe 28th March of the Living will take place on May 5th.  The live stream of the main ceremony can be seen at: http://motl.org/livestream/