The ADL’s Center on Extremism counted 72 instances of white supremacist banners being hung locations such as roof tops and highway overpasses from May 2017 until the beginning of this month.

By DANIEL J. ROTH
MARCH 15, 2018 20:42
‘Banners of Hate’ placed by US white supremacist groups
(photo credit: ANTI-DEFAMATION LEAGUE)
Advertisement
NEW YORK – The frequency with which white supremacist groups in the United States are using banners on highway overpasses and other highly visible locations to promote their ideology has dramatically risen over the past year, the Anti-Defamation League said on Thursday.While the tactic is not a new one for neo-Nazi organizations, “The number of banners deployed in the past 10 months marks an unprecedented trend,” the ADL said.The ADL’s Center on Extremism counted 72 instances of white supremacist banners being hung locations such as roof tops and highway overpasses from May 2017 until the beginning of this month.Many of the banners have been attributed to groups associated with the “alt-right” – a loose consortium of white-nationalist and far-right fringe hate groups, responsible for approximately three-quarters of the incidents.The ADL noted that some of these groups specifically target college campuses, where they hang up banners and distribute flyers to promoting their racist agenda.One of those groups, Identity Evropa, has used this tactic more than any other group, and is responsible for 28 incidents in 13 different states.“During a December 2, 2017, interview with Red Ice TV, a Swedish-American alt-right media company, [the group’s leader Patrick] Casey listed ‘bigger banner drops’ as one of the group’s stated future goals,” the ADL stated in its report.
“A few days later, Casey, joined by eight other Identity Evropa members, dropped an enormous banner from the Georgia Tech parkway overpass in Atlanta, Georgia. Afterward, the group posted images of the banner, which they claimed was 10 feet tall and more than 200 feet wide.” 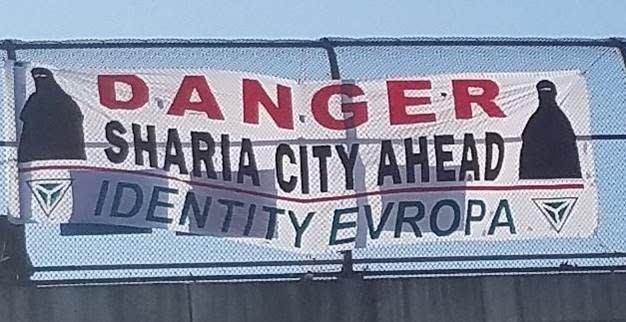 ‘Banners of Hate’ placed by US white supremacist groups (ANTI-DEFAMATION LEAGUE)A group calling itself the Patriot Front, a white nationalist group based in Texas, was responsible for the next largest number of drops, with 22 incidents in eight different states.Additional banners came from groups such as Alt Right St. Louis and the California-based Rise Above Movement.
In all, there were banner sightings in at least 21 states across the country, with Oregon having the dubious distinction of being the state with the most reported instances.That can be traced to Jimmy Marr, a well-known neo-Nazi activist who lives in Springfield, Oregon, and uses banners and a placard-adorned truck to broadcast his antisemitic views.Marr employed phrases like “Jews Did 9-11,” “The Holocaust is a Lie,” and “UnJew Humanity” as part of his repertoire. Another neo-Nazi group calling itself Vanguard America hung a banner at a Holocaust memorial in Lakewood, New Jersey, that said “(((Heebs))) Will Not Divide Us.”Lakewood is home of Beth Medrash Govoha, the largest yeshiva in the United States and one of the largest in the world.
After Oregon, the banners were most common in California, Texas and Georgia – states with particularly active chapters of Identity Evropa and Patriot Front, the ADL noted.The ADL also noted that the displays usually articulate an anti-immigrant or antisemitic message and include a self-promotional element, like the group’s name, website or symbol.More than 30% of the banners contained obvious white supremacist language, alluding to America as a “white nation.”Others used slogans promoting the idea that the white race is under attack, such as “Anti-racist is Code for Anti-White,” “It’s Okay to be White,” “For Race and Nation,” “You Will Not Replace Us” and “White Lives Matter.”Banners with anti-immigrant rhetoric constituted approximately 35% of the displays, while the remaining messages were misogynistic, anti-Muslim, anti-black or political in nature.In January 2018, a Vanguard America banner bearing the words “Feminists Deserve the Rope” was displayed at a women’s march in Providence, Rhode Island.Identity Evropa placed an anti-Muslim sign on an overpass near Dearborn, Michigan, a month later, warning drivers: “Danger – Sharia City Ahead.”“Last October, Patriot Front hung a banner near the Dallas Cowboys football stadium that proclaimed, ‘Take a Knee Back in Africa,’ a reference to African-American football players who joined a 2017 campaign to kneel as a form of protest against police brutality and racism,” the ADL added.