If mass shootings are defined as terrorism, then Congress and the administration would have to enact serious measures to deal with potential attacks, even if the gun lobby will not approve. 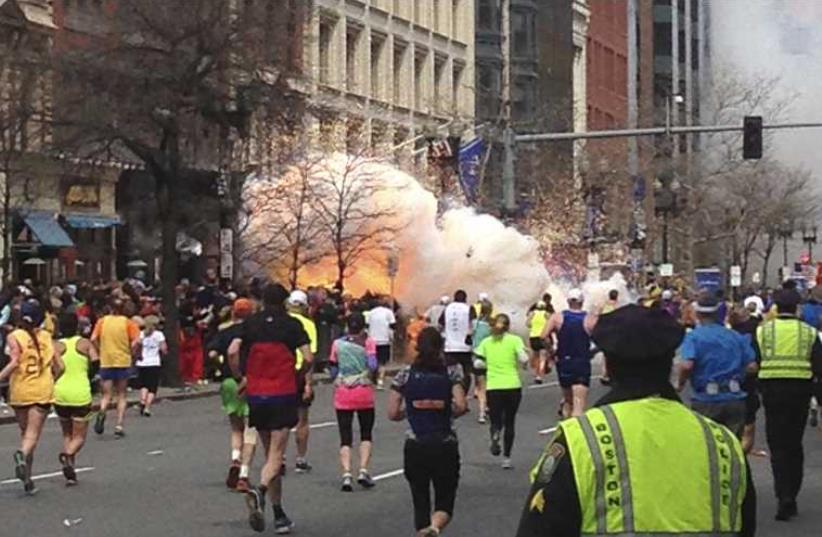 Runners continue to run toward the finish line of the Boston Marathon as an explosion erupts on April 15, 2013
(photo credit: REUTERS)
Advertisement
Was the attack in Orlando a “mass shooting” or a “terrorist attack”? A day after 49 people were killed and dozens wounded, there is still no definitive answer.On Sunday, President Barack Obama called the slaughter “an act of terror and an act of hate,” but said that authorities had not yet reached “definitive judgment on the precise motivations of the killer.”That is strange. According to reports, Omar Mateen, the attacker, called 911 during the attack and pledged allegiance to Islamic State. After the attack, ISIS issued a statement claiming responsibility. All of this, however, is apparently not enough for Obama to utter the words: “Islamist terrorism.”That is a problem. How can the US effectively fight a threat that its president cannot define? How can the FBI and other American intelligence services know whom to hunt and track if the commander-in-chief refuses to describe who these people are? In America, this issue will unfortunately become entangled in the ongoing presidential elections. Presumptive Republican nominee Donald Trump is already declaring “I told you so,” and is expected to gain points due to the perception – right or wrong – that he would be tougher than Hillary Clinton when it comes to fighting terrorism. Clinton, however, has advocated for stronger gun control in the US, and could use the Orlando shooting as the opportunity to press that message.This would be a mistake. The attack that took place in Orlando needs to transcend politics. If it gets caught up in the battle between Left and Right, then an opportunity to correct what went wrong and to prevent future attacks will be missed.This is not the first time the US has faced this problem when it comes to defining violence.In 2013, for example, the US was in a state of panic after the Boston Marathon bombings. Boston, a major American metropolitan city, was placed in lockdown. What was striking, though, was that the bombing came less than half a year after the shooting at the Sandy Hook Elementary School in Newtown, Connecticut, which killed 20 young pupils and six adults.So why the difference? The Boston attack, authorities explained at the time, was terrorism. The Newtown attack was gun violence.This distinction causes a distortion of reality. By dismissing an atrocious attack as “gun violence,” authorities are creating an excuse for why this does not need to be dealt with as terrorism. In simpler terms: if mass shootings are defined as terrorism, then Congress and the administration would have to enact serious measures to deal with potential attacks, even if it means that the gun lobby will not approve.Part of this change needs to happen in the way these acts of violence are defined. These definitions go beyond language, and could influence the direction of American foreign policy for years to come. But they need to be made if only for the simple reason that to win this war on terrorism, America needs to know who its enemies are.