Analysis: Empty American promises and the lives they can cost 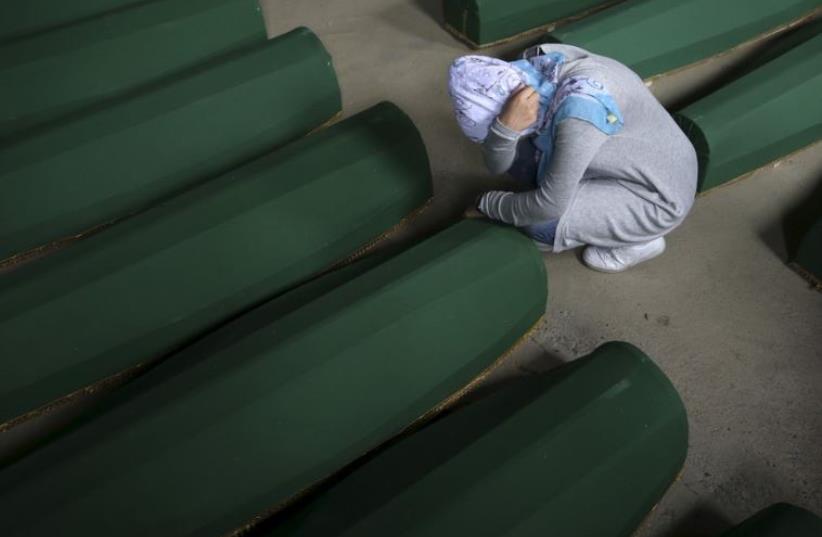 A Muslim woman cries near the coffin of her relative among the 136 newly identified victims of the 1995 Srebrenica massacre in Potocari, Bosnia and Herzegovina
(photo credit: REUTERS)
Advertisement
On Thursday, a 65-year-old man with a name that Americans struggle to pronounce was convicted of committing genocide 20 years ago in Bosnia. With bombs exploding in Brussels and a vituperative US presidential campaign in full force, the court ruling might seems obscure.But the story of Radovan Karadzic, a psychiatrist turned genocidal mini-state leader, provides lessons for Barack Obama, Hillary Clinton and Donald Trump. The moral of Karadzic’s story is simple for current and future American presidents: beware the empty threat.Karadzic, with his long mane of hair and hawkish nose, was the public face and political leader of a hardline group of Bosnian Serbs following the collapse of Yugoslavia in the early 1990s. When I covered him during the final year of the war in Bosnia, he was known for his ability to evade questions.When a shell landed in the middle of a teeming market in Sarajevo, killing scores of Bosnian Muslims, Karadzic insisted that the Bosnian Muslims had fired it themselves to garner sympathy. When Bosnian Serb snipers fired on unarmed women and children, he denied it as well.“Children were sniped at while playing in front of their houses, walking with their parents or walking home from school,” Judge O-Gon Kwon said on Thursday, while reading the verdict of the International Criminal Tribunal for the former Yugoslavia against Karadzic.The strange thing about covering Karadzic during the war was seeing him change. With each empty declaration from President Bill Clinton that Karadzic would be held accountable, the Bosnian Serbs seemed to grow more confident and defiant.Over the course of the war, the Bosnian Serbs "ethnically cleansed" – or expelled – hundreds of thousands of Muslims from their territory. They took UN peacekeepers hostage. And in July 1995, they took the town of Srebrenica and executed every Bosnian Muslim man and boy they captured. All told, 8,000 perished.Clinton’s unfulfilled threats, it seemed to me and other reporters at the time, had emboldened Karadzic and the mini-state’s military leader, General Ratko Mladic. And Srebrenica itself was, tragically, the physical embodiment of false promise.With the support of the United States and its European allies, the United Nations had declared Srebrenica a "Safe Area" and stripped its Bosnian Muslims defenders of artillery and heavy weapons. But instead of posting several thousand, heavily armed UN peacekeepers to protect the town, several hundred Canadian and then Dutch peacekeepers arrived with white vehicles, blue helmets and a few machine guns.When the Serbs attacked, Dutch defenses quickly collapsed and promised NATO air strikes never arrived. Karadzic and Mladic were left to do as they pleased.“The accused was the sole person within the RS [Bosnian Serb government] with the power to intervene to prevent the Bosnian Muslim males from being killed,” Judge Kwon said as he declared Karadzic guilty of genocide in Srebrenica.Twenty years after the mass killings, threats from current and future US presidents seem to be equally unpersuasive. In a recent profile in the Atlantic, Obama boasted about the fact that he had not carried out his vow to bomb the forces of Bashar Assad if the Syrian leader used chemical weapons against his own people.“I’m very proud,” Obama told the magazine.Hillary Clinton, meanwhile, is promising American voters that she will unleash a merciless, multi-year onslaught against ISIS - without deploying large numbers of American ground troops.“We are in it for the long haul and we will stand taller and stronger than they could possibly imagine,” Clinton vowed in a campaign speech in December.And Donald Trump is threatening everyone. He vows to place tariffs on every good sold from China – as well as air conditioners that US company Carrier manufactures in Mexico.“We’re going to tax you,” Trump vowed in a presidential debate last month. “So stay where you are [in Mexico] or build in the United States.”The lesson for US presidents is that threats can come back to haunt. Clinton responded far more quickly to Serb attacks in Kosovo in 1999, but has said that Srebrenica was one of the greatest regrets of his presidency. It is a distant second with the genocide in Rwanda, where as many as one million perished after the UN failed to protect civilians there.In hindsight, it is arguably better for American leaders to say nothing when they have no intention of taking action. Issuing hollow threats emboldens extremists. It does not cow them.And most tragically, as the survivors of Srebrenica found out, empty threats from a US president also victimize the innocent people who believe them. Today, thousands of women from Srebrenica are growing up without fathers, brothers and sons. Their crime? Believing the word of an American president.David Rohde is the National Security Investigations Editor at Reuters. From 2011 to 2013, he was a Reuters foreign affairs columnist. He is a two-time Pulitzer Prize winner and a former reporter for the New York Times and Christian Science Monitor. His most recent book is Beyond War: Reimagining America's Role and Ambitions in a New Middle East. Any opinions expressed here are the author's own.