Elections in France have been turbulent and full of surprises, and continue to evoke fear and hope in France as well as in the whole region as the last round approaches. 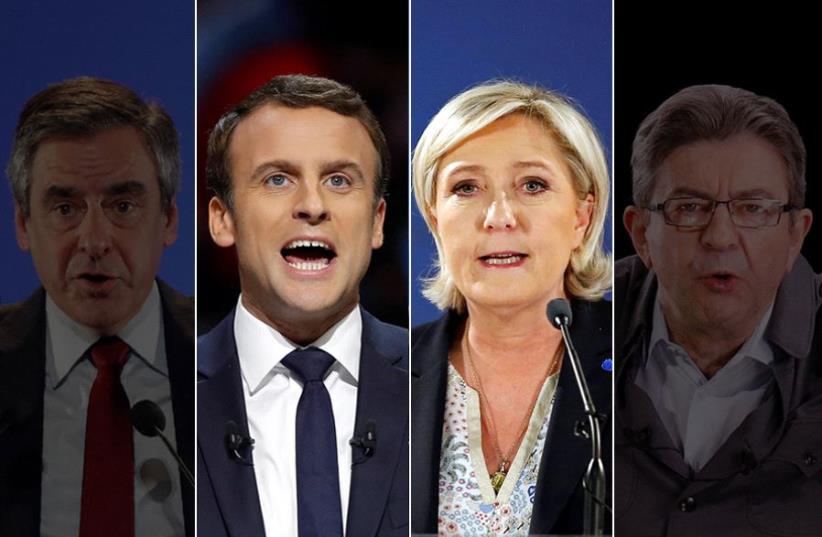 Macron, Fillon, Le Pen and Mélenchon
(photo credit: REUTERS)
Advertisement
Thousands of young people welcomed French presidential candidate Emmanuel Macron at the Parc des Expositions hall in Paris on Sunday evening, where his En Marche! movement chose to celebrate his victory in the first round of the presidential election.The large venue and the spacious press hall with its hundreds of journalists from across the globe reflected the enormous expectations fulfilled by the candidate in his first-ever electoral test. A 39-year-old man who had never been elected to any political position and who has no political party is now on his way to the Elysee Palace.Indeed, a turbulent first phase of the election campaign ended on Sunday night with a political bang: Independent candidate Macron and extreme-right candidate Marine Le Pen, with 23.7% and 21.7%, respectively, will confront each other on May 7, in the second and decisive round. In a rarity for France, neither right-wing candidate François Fillon nor ruling Socialist Party candidate Benoit Hamon made it to the runoff.On Sunday, the French showed their preference for two candidates who represented themselves and their own personal ideas, over backing any representative of the big parties to be the next president. Many of the voters no longer feel that the big parties address their concerns.In recent days, as surveys gave all four leading candidates between 19% and 25% of the votes, pundits evoked the possibility of an extreme-extreme second round; a Marine Le Pen-Jean-Luc Melanchon duel where the extreme Right challenges the extreme Left. Such a scenario has been avoided, but at what cost? A series of surprises and scandals shook up this long campaign, leading up to these results. Right-wing candidate Fillon, designated at the beginning of the race as an almostsure winner, lost credibility and support over allegations that he employed his wife as a parliamentary assistant, without her actually working. Fillon paid dearly for these revelations, arriving in third/fourth place – head-to-head with extremeleft candidate Melanchon; both men received 19.5% of the votes, according to initial results.Melanchon became the second surprise of the campaign.His anti-establishment attitude and direct style turned out to be a winning formula, and he managed to push Hamon down from the fourth place to fifth; a situation that profited Macron. Suddenly, Macron became the real candidate of the Left, replacing Hamon.And this was Macron’s greatest achievement – he attracted both left-wing and right-wing votes for an agenda that was accused of lacking clarity and trying to please all.
France Shooting CHAMPS ELYSEES AVENUE (Courtesy Thomson Reuters)
Socialist Benoit Hamon was the first candidate to react to the election results, assuming responsibility for his failure and calling upon his supporters to vote for Macron in the second round, in order to block Le Pen.But the real forces behind the French voters’ change of heart probably lie outside of the country. The Brexit vote by the British and Donald Trump’s victory in the US election created an atmosphere in which “everything is possible” and played in favor of the non-establishment candidates.The same nationalist reasoning which propelled the Brexit vote last June – fear of growing immigration into Europe from Syria, Iraq and Africa – benefited Le Pen, even though France has welcomed many fewer Syrian migrants than Germany or even Sweden.And the same anti-establishment sentiments that propelled the Trump vote were exploited by Marine Le Pen and Jean-Luc Melanchon.Having served as economy minister in the Valls government, Macron was considered by many as part of the establishment.But by quitting the Hollande administration and creating his En Marche! movement, instead of founding a party, Macron succeeded in joining this anti-establishment wave, at least partially, presenting himself as a fresh, new political force.Sunday also saw Marine Le Pen’s greatest personal victory.When her father, Jean-Marie Le Pen, faced incumbent Jacques Chirac in the 2002 presidential elections, pundits estimated that his success in the first round was an exceptional episode in French political life.Marine Le Pen’s victory Sunday evening indicates that this is not the case. Moreover, Le Pen succeeded in establishing herself as the strongest force within the French Right, much as she proclaimed through her election campaign. The National Front is in her image; she is the party, much as her father was.French voters stated Sunday that they are fed up with the economic crisis, with high taxation and with growing unemployment.Some of them voted for a new hope; other voted for the candidate who offered them easy scapegoats.