Will the Middle East be able to increase oil exports if the European Union sanctions Russia over its invasion of Ukraine? 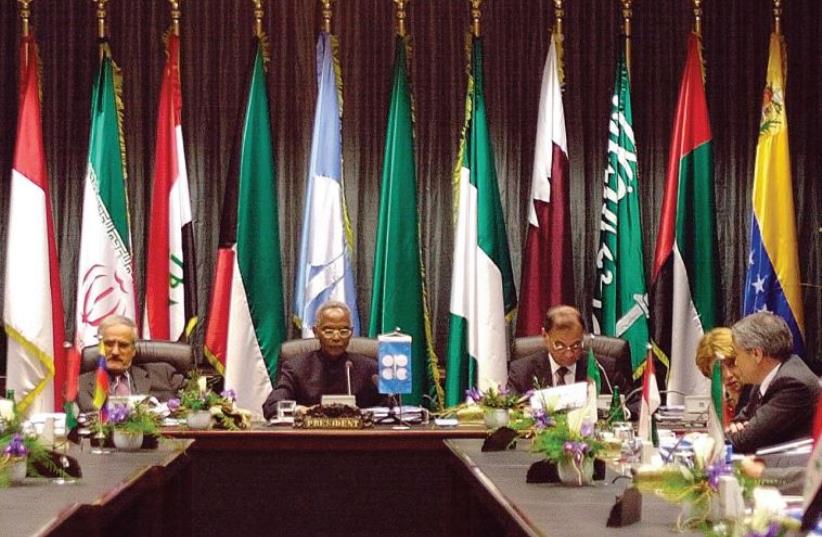 A meeting of the Organization of the Petroleum Exporting Countries at OPEC’s Vienna headquarters
(photo credit: REUTERS)
Advertisement

The Organization of the Petroleum Exporting Countries (OPEC), which coordinates petroleum exports for 13 of the biggest petroleum-producer countries in the world, warned the European Union on Monday that potential sanctions on Russia in the area of oil exports could create one of the greatest ever deficits in oil supplies, and said that it would be almost impossible to replace the Russian oil that is regularly purchased by Europe.

This followed a statement issued by the foreign ministers of the Netherlands, Luxemburg and Lithuania, which said that the EU is drafting proposals for an embargo on Russia.

Fereydoun Barkeshli, founder of the Vienna Energy Research Group, and former general manager - OPEC and International Affairs for the National Iranian Oil Company, told The Media Line that the OPEC- EU meeting, and the subsequent warning from OPEC officials, is timely and right on point.

“In fact, the international oil markets had been experiencing supply shortfalls since late 2019 when demand passed the 100 MB/D (millions of barrels per day) threshold,” he said.

Barkeshli added that Russia considered that fact even before it began its invasion of Ukraine. “Russia’s occupation of Ukraine was partly shaped up by the Russian impression that Europe can’t survive without its oil,” he said.

A man walks past a residential building hit in a military strike, amid Russia's invasion, in Kharkiv, Ukraine, April 10, 2022. (credit: Oleksandr Lapshyn/Reuters)

Dr. Ramu C.M, a consultant on energy and international politics, told The Media Line that the most viable solution for the problem presented by OPEC experts to the EU leaders, if the EU follows through on sanctioning Russia, is a slow and phased reduction of Russian imports of both oil and oil products.

He explained that this must be accompanied by structural recalibration of Europe’s vast network of refineries that are optimized for processing Russian crude oil grades, and a planned reduction in demand for oil products. However, that is a long-term solution.

Robin Mills, the CEO of QAMAR Energy based in the United Arab Emirates, told The Media Line that there is no immediate solution for replacing all Russian oil and gas exports.

“It will take several years to replace Russian supplies substantially, at least in Europe,” he said.

However, he added, “the Middle East does hold nearly all spare oil production capacity, and OPEC’s decisions are very important for any loss of Russian supplies.”

That, according to Ahmed AlShammasi, lecturer on Geopolitics in the Middle East at Vatel Business School in Bahrain, “would suggest that the situation is very profitable at the moment for the Middle East.”

C.M notes that top European representatives are already negotiating with major Middle Eastern petroleum exporters such as Saudi Arabia, the UAE and Qatar.

“This arguably brings back some attention to the most sought-after epicenter of oil production,” he said. “There is no doubt that it bodes well for the region’s governments and the national oil companies in terms of long-term revenue guarantees amid an increasing international opposition to oil production investments,” he added.

However, AlShammasi added that it would take a minimum of five years, and billions of dollars for any country to build up supplies and a distribution chain for the massive amount of oil that the EU would request.

C.M points out some other reasons which would prevent Middle Eastern oil producers from being able to replace the Russian oil supply to Europe.

One is the obligation that the Middle Eastern countries have to some Asian buyers. Because of this, he said, “they have minimal spare capacity to reroute toward Europe.”

He notes recent events which prove that the Gulf’s capacity is not as reliable as expected.

“The Houthi missile attacks on the Abqaiq and Quraish oil infrastructures in Saudi Arabia exposed the vulnerability of the oft-cited ‘spare production capacity,’ as the Saudis struggled to replace the lost volumes in a timely manner,” C.M added.

The close ties of the Gulf countries to Russia also are a matter to take into consideration.

“These countries are still aligned with Russia in a mutual self-help mechanism courtesy of OPEC+ when it comes to allocating production quotas, meaning they wouldn’t want to hastily pump out more oil and give up any leverage, and safeguarding crucial oil revenues,” he said.

Finally, he continued: “Even if the Middle Eastern producers can gradually increase oil supplies to Europe in the long term, they will not do it at the cost of substitution with the more valuable long-term markets towards the East.”

Despite the difficulties for the Middle East to supply more oil and gas, Mills believes that the situation does raise the Middle Eastern countries’ geopolitical and economic importance. “However, it is not clear what exactly they want or might get beyond extra revenues now,” he said.

Mills believes that, eventually, the Middle East and Russia will end up exchanging their oil markets.

The Middle Eastern countries “are already important suppliers” of oil to Europe, he said. “Liquefied natural gas (LNG) suppliers, especially Qatar, will gain market share in Europe versus Russia in the medium term. Russian oil may go more to Asia, while some Middle Eastern supplies are diverted to Europe,” he said.

All this, C.M believes, means that the next couple of years portends an uptick in investments in the Middle East’s upstream oil sector.

Regarding Iran, which is another important factor in the energy industry, C.M said that “the current energy shortfall could act as a catalyst for the negotiating parties, especially the EU, to push closer to a nuclear deal with Iran.”

Talks in Vienna on reviving the nuclear deal between Iran and the world powers, first signed in 2015 and known as the Joint Comprehensive Plan of Action (JCPOA), are reportedly in the final stages.

However, C.M added, lifting the sanctions imposed on Iran immediately by finalizing the deal, would come at the cost in the US Congress of opposition from the Republicans and the Iran-hawks within the Democratic Party, and also from Israel and Washington’s Gulf allies.

Additionally, Barkeshli said, “EU retailers have been in contact with NIOC [National Iranian Oil Company] in recent weeks but, JCPOA is so deeply engraved in US/EU political institutions, that hasn’t led to any break in the ranks,” he concluded.