Fifteen Republican governors, including four presidential candidates, said they would uphold state sanctions in protest to the overwhelming support the deal has received in Congress. 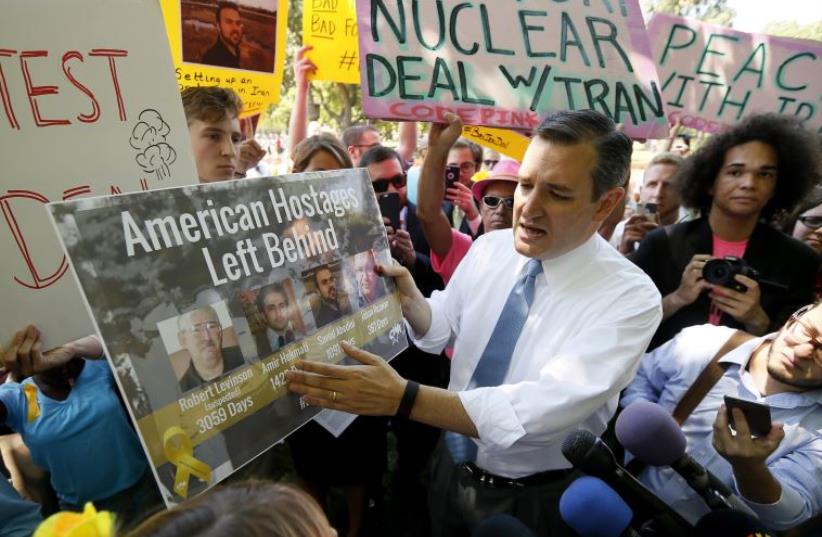 US Republican presidential candidate Senator Ted Cruz shows off a poster of Americans held in Iran as he talks with counter-demonstrators and the media about the Iran nuclear deal
(photo credit: REUTERS/JIM BOURG)
Advertisement
WASHINGTON - Opponents of the nuclear deal with Iran, facing likely defeat in Washington, said on Tuesday they would try to keep economic sanctions in place at the state level, an effort that could play into the US 2016 elections.Fifteen Republican governors, including four presidential candidates, said they would uphold state sanctions. Another group said it planned to take the issue directly to voters in November 2016.Congress on Tuesday began debate on the agreement, which would offer Iran relief from international sanctions in exchange for curbs on its nuclear program.Republicans overwhelmingly oppose the deal, but President Barack Obama has secured enough support among Democratic lawmakers to ensure it survives congressional review.Roughly half of the 50 US states have enacted measures that punish companies if they do business with Iran, barring them in some cases from public contracts and ordering public pension funds to divest investments in them.State-level sanctions so far have done little to influence corporate behavior and can actually backfire by causing businesses to invest elsewhere, said Richard Nephew, a former US sanctions official."They can just move to the state next door. Kentucky's loss can be Tennessee's gain," he said.Though the impact is relatively minor for most businesses with operations in Iran, the issue was significant enough to be a negotiating point in the nuclear talks.One paragraph in the final agreement, reached on July 14, directs the United States to "actively encourage" state and local officials to lift their sanctions.In a letter to Obama, the 15 governors said: "These state-level sanctions are critically important and must be maintained."Four of the governors are competing for the Republican presidential nomination: Bobby Jindal of Louisiana, Chris Christie of New Jersey, John Kasich of Ohio and Scott Walker of Wisconsin.Meanwhile, a group of Republican state officials operating under the name Defund Iran, said it would try to put initiatives on the ballot to strengthen sanctions in up to 25 states. That could potentially help their party's presidential nominee if it drives opponents of the deal to the polls.