Ben Carson: Tragedy of Holocaust could have been greatly minimized should the Jews have been armed

“I’m telling you there is a reason these dictatorial people take the guns first,” says presidential hopeful. 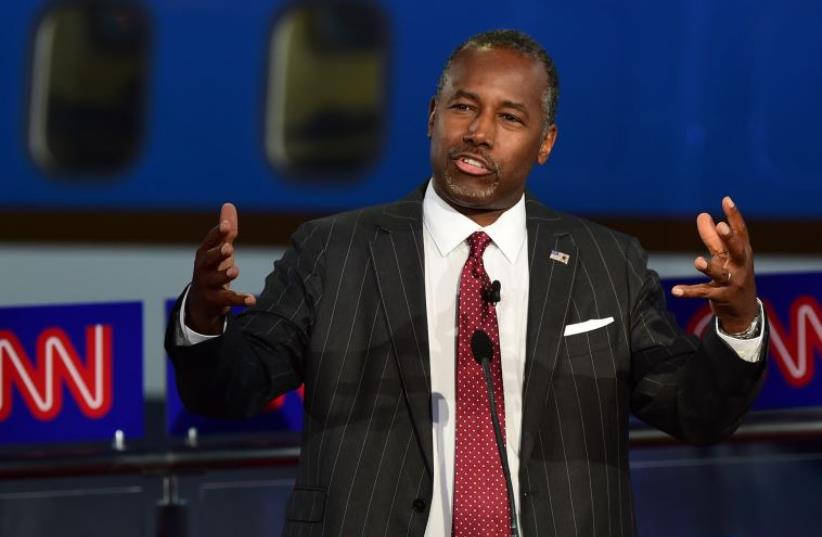 Republican presidential hopefuls, retired neurosurgeon Ben Carson gestures while speaking during the Republican presidential debate at the Ronald Reagan Presidential Library in Simi Valley, California on September 16, 2015.
(photo credit: FREDERIC J BROWN / AFP)
Advertisement
In a CNN interview Thursday, Republican presidential hopeful Dr. Ben Carson said that the tragedy of the Holocaust could have been avoided, or its magnitude greatly minimized, had the Jews of Europe been armed.
“I think the likelihood of Hitler being able to accomplish his goals would have been greatly diminished if the people had been armed,” Carson said.  “I’m telling you there is a reason these dictatorial people take the guns first.”
The Republican said that the process of removing accessibility to guns allowed the Nazis to "carry out their evil intentions with relatively little resistance."
His comments came in response to the flare of shootings that have plagued the US in "gun-free zones," such as elementary schools and college campuses. Shooters select these gun-free zones as targets because they know resistance will be absent, said Carson.
Arming kindergarten teachers could help prevent school shootings, said the presidential hopeful.
CNN anchor Wolf Blitzer was challenging Carson over claims in his latest book that gun control has historically been a predicate for tyranny.
“German Citizens were disarmed by their government in the late 1930s and by the mid 1940s Hitler’s regime had mercilessly slaughtered six million Jews and numerous others whom they considered inferior,’ Carson wrote in “A More Perfect Union,” published this week.
The book’s release Oct. 6 was coincident with Carson’s reaction to the news of the latest mass killing, in Roseburg, Ore. Carson said earlier this week that in a hypothetical mass shooting situation, he would lead a charge on the shooter.
Hitler and Nazi Germany used overwhelming force to occupy wide swathes of Europe and to murder six million Jews.
Hitler’s rise to power in Germany in the 1920s and early 1930s encountered some violent resistance, but was otherwise relatively unimpeded because the vast majority of Germans chose not to resist Nazism and to a large degree embraced it.
Carson, a retired neurosurgeon, is not the first gun-rights activist to suggest gun control was a factor enabling the Nazis to perpetrate genocide. In January 2013, after several such remarks, the Anti-Defamation League called on conservatives to keep Nazi analogies out of the debate over gun control.
Later that year, a National Rifle Association board member invoked the Holocaust in criticizing a Jewish New Jersey mayor for supporting gun control.