There were 44 child suicide bombings in West Africa last year, up from four in 2014, UNICEF said, mostly in Cameroon and Nigeria. 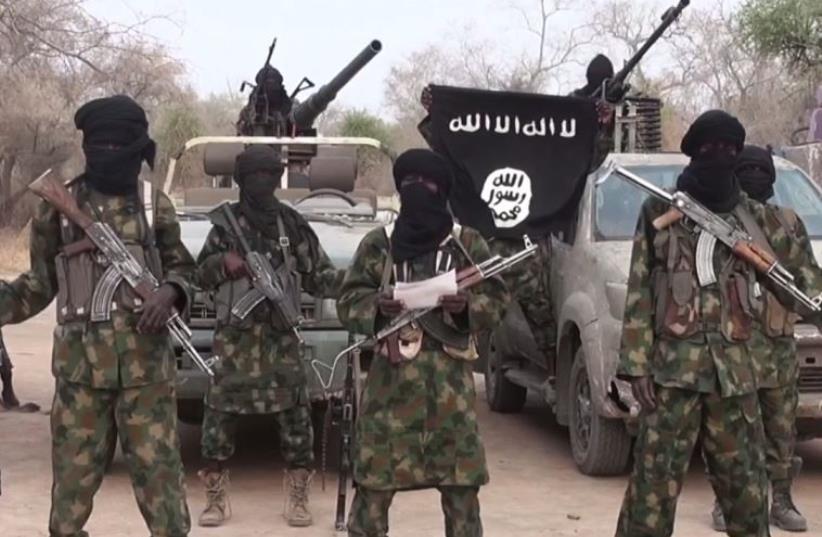 Boko Haram
(photo credit: screenshot)
Advertisement
Boko Haram child suicide bombings have surged 11-fold in West Africa over the last year, with children as young as 8, mostly girls, detonating bombs in schools and markets, a leading charity said on Tuesday.Suicide bombings have spread beyond Nigeria's borders, with an increasing number of deadly attacks carried out by children with explosives hidden under their clothes or in baskets."The use of children, especially girls, as so-called suicide bombers has become a defining and alarming feature of this conflict," Laurent Duvillier, regional spokesman for the United Nations Children's Fund (UNICEF), told the Thomson Reuters Foundation."It's basically turning the children against their own communities by strapping bombs around their bodies," he said.There were 44 child suicide bombings in West Africa last year, up from four in 2014, UNICEF said, mostly in Cameroon and Nigeria.Some young children probably do not know they are carrying explosives, which are often detonated remotely, Duvillier said.Islamist Boko Haram's six-year campaign to set up an Islamic emirate in northeastern Nigeria has killed some 15,000 people, according to the U.S. military.Outmanoeuvred after a regional offensive drove it from strongholds in Nigeria last year, it is increasingly using children to carry out attacks.The tactic has proven effective in increasing the number of casualties as people do not usually see children as a threat.It is not clear how Boko Haram coerces children to carry out the attacks, but those who have been raped are more psychologically damaged and vulnerable, the U.S. Army says.Amnesty International estimates Boko Haram has kidnapped about 2,000 women and girls since 2014 for use as cooks, sex slaves, fighters and suicide bombers.It is two years since the militants abducted some 270 Nigerian schoolgirls in Chibok, many of whom were forced to convert to Islam and marry their captors.Three-quarters of the suicide bombers have been girls, UNICEF said, who are often were thought less likely to arouse suspicion, although that may be changing now.Abducted boys are forced to attack their own families to demonstrate their loyalty to Boko Haram, it said.Although many children are being released from captivity as the military reclaims territory from Boko Haram, they often face stigma and rejection."Some women would beat me," 17-year-old Khadija, who lives in a camp for displaced people in Nigeria, told UNICEF.She and her baby, born of rape, escaped captivity during a Nigerian army attack on Boko Haram."They said: 'You are a Boko Haram wife, don't come near us!'" she told UNICEF.Children are the main victims in one of Africa's fastest growing humanitarian crises, UNICEF said, making up the majority of the 2.3 million people displaced since mid-2013.Those separated from their families by the conflict and out of school are vulnerable to recruitment by armed groups, Duvillier said.Almost one million Nigerian children are missing out on education as Boko Haram has destroyed more than 900 schools and killed more than 600 teachers, Human Rights Watch said on Tuesday."Boko Haram is robbing an entire generation of children in northeast Nigeria of their education," Mausi Segun, Nigeria researcher at Human Rights Watch, said in a statement.