Bangkok shrine a tourist attraction, also popular with Thais; no immediate claim of responsibility; bomb was on motorcycle, police say. 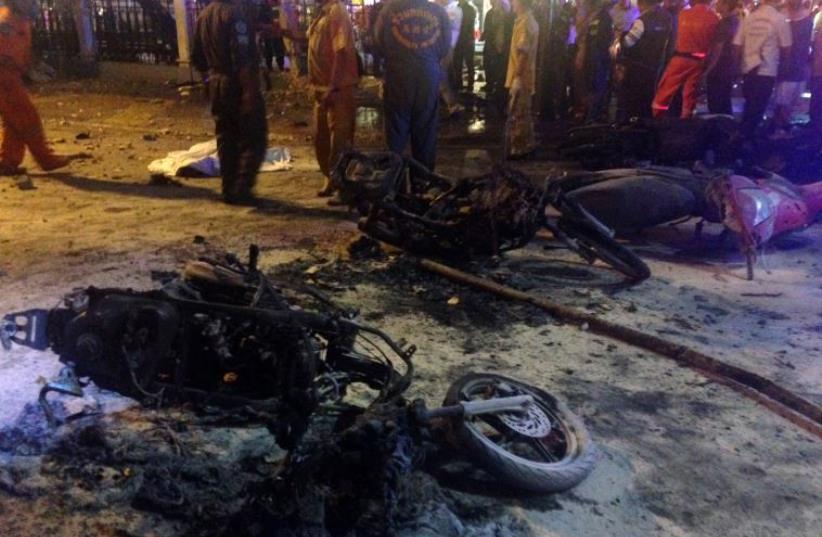 Destroyed motorbikes are pictured at the scene of devastation after a bomb exploded outside a religious shrine in central Bangkok late on August 17, 2015
(photo credit: AIDAN JONES / AFP)
Advertisement
A bomb on a motorcycle exploded on Monday just outside a Hindu shrine in the Thai capital, killing 27 people, including foreign tourists, media reported, in an attack the government said was a bid to destroy the economy.There was no immediate claim of responsibility for the blast at the Erawan shrine at a major city-centre intersection. Thai forces are fighting a low-level Muslim insurgency in the predominantly Buddhist country's south, but those rebels have rarely launched attacks outside their ethnic Malay heartland."The perpetrators intended to destroy the economy and tourism, because the incident occurred in the heart of the tourism district," Defense Minister Prawit Wongsuwan told Reuters.

The Erawan shrine, on a busy corner near top hotels, shopping centers, offices and a hospital, is a major attraction, especially for visitors from East Asia, including China. Many ordinary Thais also worship there.
Motorcycle bomb near shrine in Thai capital
The government would set up a "war room" to coordinate the response to the blast, the Nation television channel quoted Prime Minister Prayuth Chan-ocha as saying.Two people from China and one from the Philippines were among the dead, a tourist police officer said. Domestic media said 27 people had been killed, 10 of them men and 17 women.Police said 78 people were wounded. Media said most of them were from China and Taiwan."It was like a meat market," said Marko Cunningham, a New Zealand paramedic working with a Bangkok ambulance service, who said the blast had left a two-meter-wide (6-foot-) crater."There were bodies everywhere. Some were shredded. There were legs where heads were supposed to be. It was horrific," Cunningham said, adding that people several hundred meters away had been injured.POLITICAL TENSIONAt the scene, authorities ordered onlookers back, saying they were checking for a second bomb."We are now looking for another two to three bombs, as we have found one suspicious object," national police chief Prawut Thawornsiri told Reuters."There could be another explosion, so we have blocked off the crime scene and are asking bystanders to move back."Authorities stepped up security checks at some major city intersections and in tourist areas.While initial suspicion might fall on Muslim separatists in the south, Thailand has been riven for a decade by an intense and sometimes violent struggle for power between political factions in Bangkok.Occasional small blasts have been blamed on one side or the other. Two pipe bombs exploded outside a luxury shopping mall in the same area in February, but caused little damage.Police said that attack was aimed at raising tension when the city was under martial law.The army has ruled Thailand since May 2014, when it ousted an elected government after months of at times violent anti-government protests.The shrine intersection was the site of months of anti-government protests in 2010 by supporters of ousted former Prime Minister Thaksin Shinawatra. Dozens were killed in a military crackdown and a shopping center was set ablaze.The Foreign Ministry said in a statement Monday that there were no known Israeli casualties in Monday's bombing.The ministry is maintaining contact with the Israeli Embassy in Bangkok following the explosion.Israeli Nati Hadad, who operates a search and rescue company in Thailand, told The Jerusalem Post that his personnel in Bangkok were going to all the hospitals in the area to see if there are any Israeli or Jewish people who might need assistance.