The federal jury chose death by lethal injection for Tsarnaev, 21, over its only other option: life in prison without possibility of release. 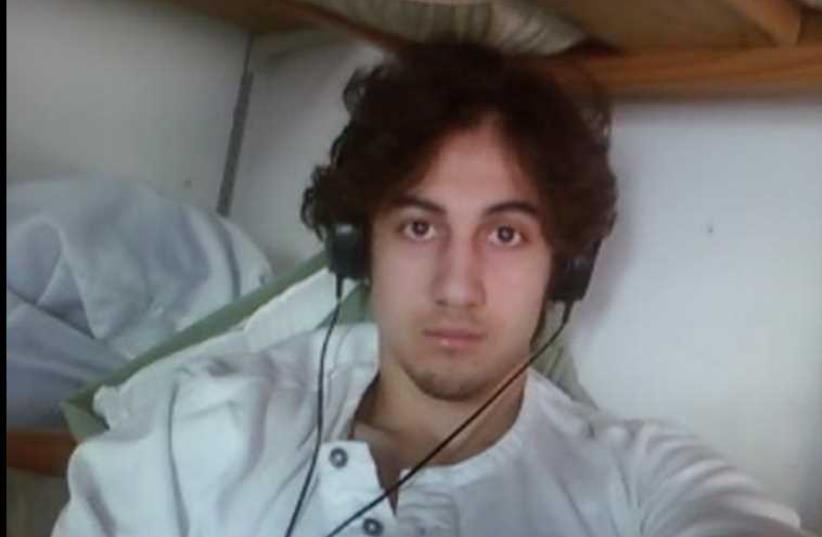 Dzhokhar Tsarnaev is pictured in this handout photo presented as evidence by the US Attorney's Office in Boston
(photo credit: REUTERS)
Advertisement
A US jury on Friday sentenced Boston Marathon bomber Dzhokhar Tsarnaev to death for helping to carry out the 2013 attack that killed three people and injured 264 at the world-renowned race, taking 15 hours to reach a decision.The federal jury chose death by lethal injection for Tsarnaev, 21, over its only other option: life in prison without possibility of release.The same panel last month found the ethnic Chechen guilty of placing a pair of homemade pressure-cooker bombs at the race's crowded finish line on April 15, 2013, as well as fatally shooting a policeman. The bombing was one of the highest-profile attacks on US soil since Sept. 11, 2001.During 10 weeks of testimony, the jury heard from about 150 witnesses, including people whose legs were torn off by the shrapnel-filled bombs. William Richard, the father of bombing victim Martin Richard, described the gut-wrenching decision to leave his 8-year-old son to die of his wounds so that he could save the life of his daughter, Jane, who lost a leg but survived.Prosecutors described Tsarnaev as an adherent of al-Qaida's militant Islamist views who carried out the attack as an act of retribution for US military campaigns in Muslim-dominated countries.Defense attorneys opened the trial on March 5 with the blunt admission that Tsarnaev committed all the crimes he was accused of. But they argued that their client was a junior partner in a scheme hatched and driven by his 26-year-old brother, Tamerlan. Tamerlan died after the gunfight, which ended when Dzhokhar ran him over with a stolen car.The jury's decision does not mean that death is imminent for the former high school wrestler. US District Judge George O'Toole will formally sentence Tsarnaev to death at a yet-to-be-scheduled hearing sometime in the next few months. Defense attorneys are likely to appeal the decision.The death penalty remains highly controversial in Massachusetts, which has not put anyone to death in almost 70 years and abolished capital punishment for state crimes in 1984. Tsarnaev was tried under federal law, which allows for lethal injection as a punishment.Polls had shown that a plurality of Boston-area residents opposed executing Tsarnaev. Opponents included Martin Richard's family and the sister of Sean Collier, the Massachusetts Institute of Technology policeman who was shot to death three days after the bombing by the Tsarnaev brothers.Just three of the 74 people sentenced to death in the United States for federal crimes since 1988 have been executed. The first was Timothy McVeigh, put to death in June 2001 for killing 168 people in his 1995 attack on the federal government office building in Oklahoma City.Other people convicted of attacks labeled as terrorist by the US government, including 9/11 conspirator Zacarias Moussaoui and shoe-bomber Richard Reid, drew life prison sentences.In addition to Richard and Collier, Tsarnaev was found guilty of killing 23-year-old Chinese exchange student Lingzi Lu and 29-year-old restaurant manager Krystle Campbell.The jury was repeatedly shown videos of the blinding flashes and deafening explosions when the bombs went off, followed by screams of fear and pain, pools of blood and frenzied efforts by first responders to save the lives of the 18 people who lost limbs in the attack.They also heard about the 24 hours of chaos that followed the assassination-style killing of Collier. Hundreds of thousands of greater Boston residents were ordered to stay in their homes as law enforcement officers hunted for Tsarnaev.Tsarnaev himself remained a stoic, silent presence throughout the trial, and did not testify in his own defense. He showed emotion only once, when his 64-year-old aunt, Patimat Suleimanova, who had traveled from Russia to testify, broke down in tears on the witness stand upon seeing her nephew. She was unable to compose herself and was excused.A Roman Catholic nun and prominent death-penalty opponent, Sister Helen Prejean, testified she had met with Tsarnaev, who told her "no one deserves to suffer" as his victims had. Prejean, a Nobel Peace Prize nominee, said she believed he was "genuinely sorry" for his actions.But the jury's decision suggests it also gave weight to the note Tsarnaev left in the boat where he was found hiding four days after the bombing."We Muslims are one body you hurt one you hurt us all," the message read. "I don't like killing innocent people it is forbidden in Islam, but ... it is allowed."