By REUTERS
Dzhokhar Tsarnaev 370
(photo credit: VK profile)
Advertisement
Boston bombing suspect Dzhokhar Tsarnaev posted links to Islamic websites and others calling for Chechen independence on what appears to be his page on a Russian language social networking site.Abusive comments in Russian and English were flooding onto Tsarnaev's page on VK, a Russian-language social media site, on Friday after he was identified as a suspect in the bombing of the Boston marathon.Police launched a massive manhunt for Tsarnaev, 19, after killing his older brother Tamerlan Tsarnaev in a shootout overnight. 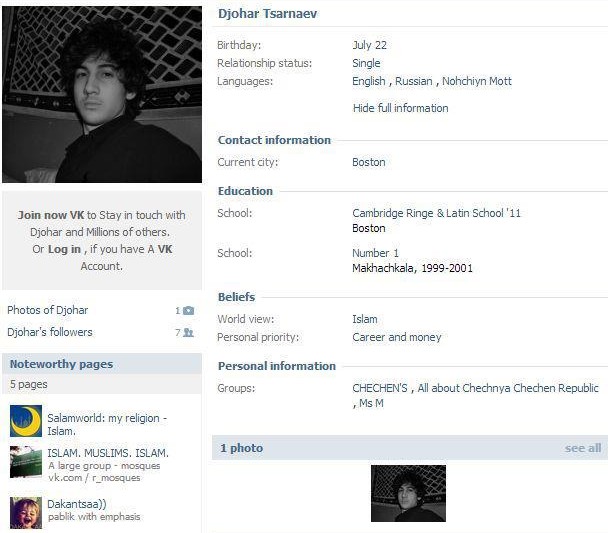 On the site, the younger Tsarnaev identifies himself as a 2011 graduate of Cambridge Rindge and Latin School, a public school in Cambridge, Massachusetts.It says he went to primary school in Makhachkala, capital of Dagestan, a province in Russia that borders Chechnya, and lists his languages as English, Russian and Chechen.His "World view" is listed as "Islam" and his "Personal priority" is "career and money".He has posted links to videos of fighters in the Syrian civil war and to Islamic web pages with titles like "Salamworld, my religion is Islam" and "There is no God but Allah, let that ring out in our hearts".He also has links to pages calling for independence for Chechnya, a region of Russia that lost its bid for secession after two wars in the 1990s.The page also reveals a sense of humor, around his identity as a member of a minority from southern Russia's restive Caucasus, which includes Chechnya, Dagestan, Ingushetia and other predominately Muslim regions that have seen two decades of unrest since the fall of the Soviet Union.A video labelled "tormenting my brother" shows a man resembling his dead brother Tamerlan laughing and imitating the accents of different Caucasian ethnic groups.He has posted his own joke: "A car goes by with a Chechen, a Dagestani and an Ingush inside. Question: who is driving?"The answer: the police.