"I do not think it would be right for me to try to be the captain that steers our country to its next destination," Cameron told reporters on Friday. 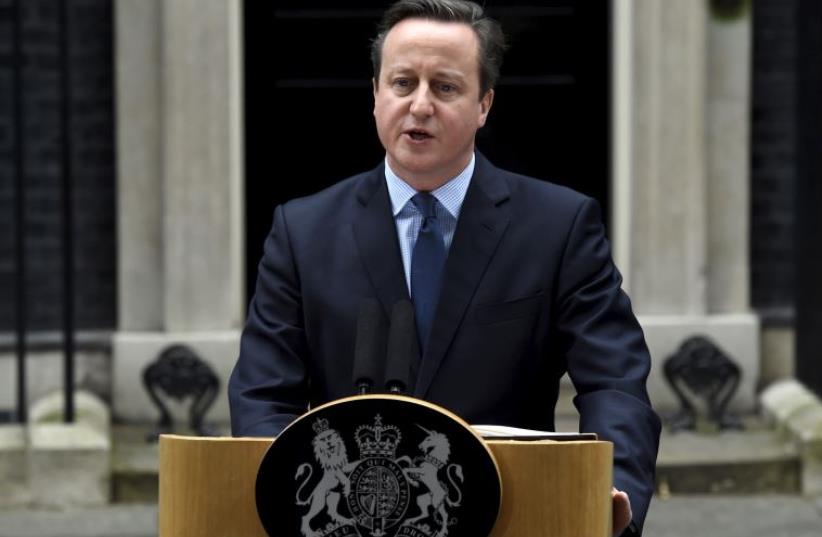 Britain's Prime Minister David Cameron speaks outside 10 Downing Street in London, Britain February 20, 2016
(photo credit: REUTERS)
Advertisement
United Kingdom Prime Minister David Cameron announced his resignation on Friday morning, just hours after the results of a dramatic referendum showed that the British people had voted to leave the European Union.
“The country requires fresh leadership to take it in this direction,” Cameron said in a short public statement he delivered outside his Downing Street office in London.
“I will do everything I can as prime minister to steady the ship over the coming weeks and months. But I do not think it would be right for me to try to be the captain that steers our country to its next destination,” Cameron said. “This is not a decision I have taken lightly,” he added.
Cameron, who has been prime minister since 2010, was a vocal opponent of the exiting the EU, a process nicknamed Brexit.
He did not give a specific date for when he would leave office, but said he would stay in place for another three months with an eye to the country having a new prime minister by October.
“A negotiation with the EU will need to begin under a new prime minister," Cameron said. That new prime minister should be the one to start the formal process of leaving the EU, which involves triggering Article 50, he added.
“I will attend the EU Council next week to explain the decision that the British people have taken and my own decision,” Cameron said.
He urged the British public to respect the results of the referendum, which now must be formalized with a parliamentary vote.
“The British people have made a choice that not only needs to be respected but those on the losing side of the argument, myself included, should help to make it work,” said Cameron.
“Although leaving Europe was not path that I recommended, I am the first to praise our incredible strength [as a democracy],” Cameron said.
“I said before that Britain can survive outside the EU and that indeed we could find a way. Now that the decision has been made to leave, we need to find the best way,” Cameron said.
The Bank of England said on Friday it would take all necessary steps to shield Britain's economy from the shock decision by voters to pull the country out of the European Union which caused immediate turmoil on financial markets.
Quitting the EU could cost Britain access to the EU's trade barrier-free single market and mean it must seek new trade accords with countries around the world. The United Kingdom itself could break apart, with leaders in Scotland -- where nearly two-thirds of voters wanted to stay in the EU -- calling for a new vote on independence.The EU for its part will be economically and politically damaged, facing the departure not only of its most free-market proponent but also a member with a UN Security Council veto and powerful army. In one go, the bloc will lose around a sixth of its economic output. Populist leaders in France and the Netherlands demanded their own referendums to leave.The vote will initiate at least two years of divorce proceedings with the EU, the first exit by any member state. Cameron.His Conservative Party rival Boris Johnson, the former London mayor who became the most recognizable face of the "leave" camp, is now widely tipped to seek his job.The four-month campaign to lave the EU was among the divisive ever waged in Britain, with accusations of lying and scare-mongering on both sides and rows on immigration which critics said at times unleashed overt racism.It also revealed deeper splits in British society, with the pro-Brexit side drawing support from millions of voters who felt left behind by globalization and believed they saw no benefits from Britain's ethnic diversity and free-market economy.A pro-EU member of parliament was stabbed and shot to death in the street a week ago by an attacker who later told a court his name was "Death to traitors, freedom for Britain". Older voters backed Brexit; the young mainly wanted to stay in.But in the end, concerns over uncontrolled immigration, loss of sovereignty and remote rule from Brussels appear to have trumped almost unanimous warnings of the economic perils of going it alone.