During investigations, Mohamed Abrini, who claims to be "the man in the hat" says waiting halls with passengers flying to Israel, Russia and the US had been chosen as targets in the attack. 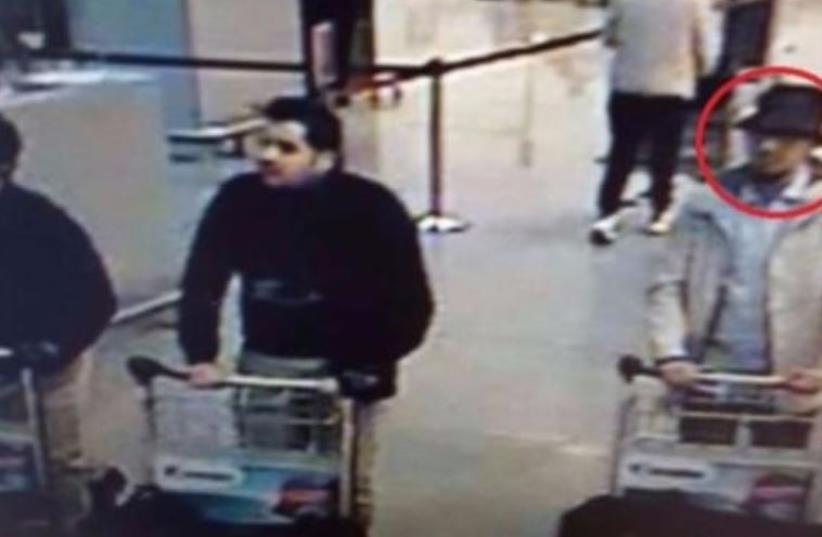 Security camera footage shows three men that Belgian police suspect of carrying out the attacks in Brussels
(photo credit: screenshot)
Advertisement
Mohamed Abrini, who claims to be "the man in the hat" seen in footage walking into the Brussels airport alongside two suicide bombers, said during recent investigations that his accomplices had made plans to attack travelers at the hub in Belgium who were flying to Tel Aviv among other destinations. According to French BFM TV on Thursday, Abrini described the Belgian El-Bakraoui brothers and suicide bomber Najim Laachraoui as having the leading roles in the March 22 attacks at the airport and a metro stop that left 32 people killed. He reportedly revealed that an attack in France had initially been planned, but due to the March 18 arrest of Salah Abdeslam - the key surviving suspect of the 2015 Paris terrorist attacks - Brussels was the chosen target. Abrini, who was captured on Friday, also claimed that Ibrahim El-Bakraoui had chosen the targets in the attack at Zaventem Airport in Brussels, which included waiting halls with passengers flying to Israel, the US and Russia.
Brussels attack suspects
However, Abrini allegedly told investigators that the plans had not materialized as he fled the scene after the initial two explosions went off at the airport, leaving his jacket and hat in a garbage bin. On the day of the attacks, security services found and destroyed a third bomb after the two explosions at Brussels airport.According to the report, Abrini attempted to minimize his role in the attack, clamming he had not been "radicalized" by Islamist militant groups. BFM reported that during questioning Abrini had told investigators: "I wouldn't have hurt a fly."Abrini, who was wanted for November's Islamic State attacks in Paris, was among five people arrested in Brussels on Friday, Belgian prosecutors said, adding that he was also tied to last month's Brussels bombings.They said they were checking whether Abrini, a 31-year-old Belgian, was the "man in the hat" seen on security footage at the Brussels with two suicide bombers. Belgium's public broadcasters said it was "more than likely" he was.Reuters contributed to this report.