Resident: “It’s scary. But that’s New York! It’s life now. It’s unfortunate but this is the world we live in." 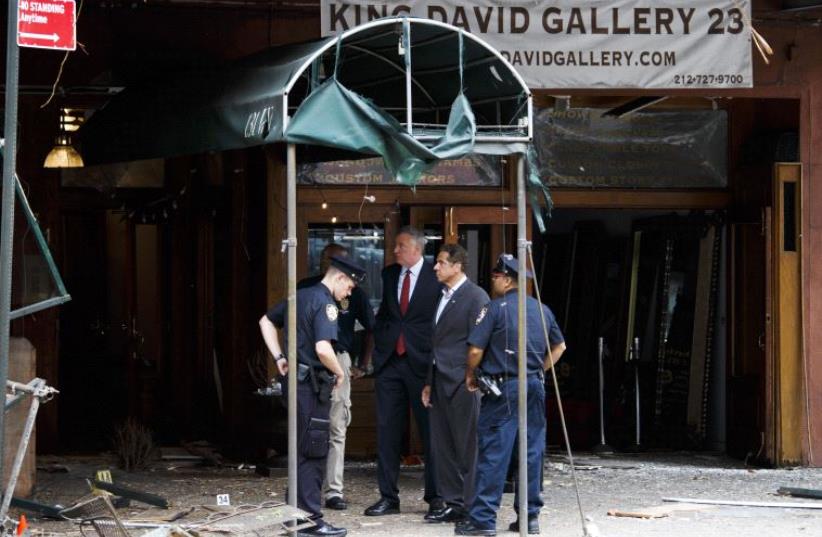 New York Mayor Bill de Blasio and New York Governor Andrew Cuomo tour the site of an explosion that occurred in the Chelsea neighborhood of New York.
(photo credit: REUTERS)
Advertisement
NEW YORK - Following the explosion that occurred on Saturday night in the Chelsea neighborhood of Manhattan, residents of the area told The Jerusalem Post they are worried, but will not change their routines as a result of the events.The night of the explosion, which took place by 23rd street and 6th avenue, Kathy Lubetkin, who lives on the same corner, was in the subway. It was only when she and her husband walked up from the station that she saw the crime scene.“As we’re walking up the train, there are police, and ambulances, and firetrucks,” she recalled. “Hundreds of people, all congregated on 6th Avenue and 23rd Street.”Two days after the bombing, the NYPD reopened the area for circulation on Monday morning.“There is so much traffic,” Lubetkin told the Post as she was looking out of her window.“I still see police vehicles.”“It’s scary,” she said. “But that’s New York! It’s life now. It’s unfortunate, but this is the world we live in, you have to be so careful and suspicious about every little thing. You just can’t ignore anything anymore.”Kathy Lubetkin and her husband moved to Chelsea from Livingston, New Jersey less than a month ago. Even though the events of the past few days make her feel uneasy, she said she will not change her everyday habits.“I feel like once something like this happens, it’s almost safer. That could just be ignorance, but I feel like it’s almost safer because there is so much police presence,” she told the Post. “Honestly, I get worried all the time anyway, but I try not to stop my everyday life, because then they win.Then, these crazy people win. So I try not to allow that to happen.”New York University student, Nathan Salvadori, who lives just steps away from where the second explosive device in Chelsea was found and removed on Saturday, said while he isn’t particularly afraid, he has been thinking about the events and following the news every since.“I was right in that area the night before for an event, and it was exactly on 23rd between 6th and 7th Avenues,” he told the Post. “It makes me wonder what could have happened if the blast would have occurred on Friday night.”“I’m not scared. I’m just living my life,” he said. “The fact that I heard on the news that the New York and New Jersey blasts are related concerns me a little, but I think, so far, [that] I’ll continue to live my life in tranquility.”Salvadori added that perhaps the approaching presidential elections and the UN General Assembly’s debate event happening this week require citizens to be more aware of their surroundings.“We may be approaching a period that could be a more problematic and sensitive one,” he said.Even though he is trying to “go about business as usual,” Thomas Drummond- Hay’s everyday life was disturbed by the blast.He and his roommates live on 23rd Street, in the building adjacent to the one in front of which the explosion occurred.“All the windows in our unit were blown out, and the fire department came and kind of cleaned some of it up and knocked out some of the windows. Our landlord is gonna be replacing them,” he told the Post on Monday.Since the explosion, Drummond-Hay and his roommates have not been staying in the apartment. They were offered a free room at The Standard Hotel nearby, along with other residents on the same block.Drummond-Hay was finally allowed back into his apartment on Monday evening.“It doesn’t worry me too much,” he said.“The police did a pretty good job finding him within two days of the event, so I still have faith in that.”Drummond-Hay said he has no fears walking around his block, and still feels very safe in Manhattan.