"Confidence in the government's ability to keep citizens safe may not be as much a blaming of government ineptitude as it is a better understanding of the challenging nature threats in the US." 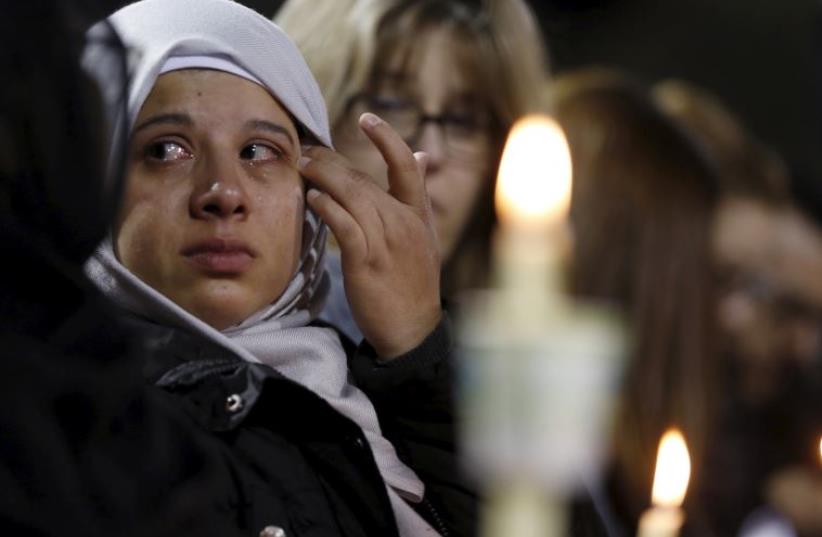 An attendee reflects on the tragedy of Wednesday's attack during a candlelight vigil in San Bernardino, California
(photo credit: REUTERS)
Advertisement
NEW YORK - Confidence in the US government to protect its citizens from militant attacks has fallen to its lowest in more than a decade after a pair of suspected militant Islamists gunned down 14 people at a holiday party in California, a poll released on Friday found.Only 55 percent of respondents said they had "a fair amount" or "a great deal" of confidence that authorities could protect the country from further attacks, according to data collected by Gallup on Dec. 8-9, just days after the San Bernardino massacre.The finding represents a drop of 12 percentage points since June and extends the gradual erosion in confidence that began soon after the Sept. 11, 2001, attacks by militant Islamists in New York, Washington and Pennsylvania. It is the lowest reading since Gallup began asking the question, following the 2001 attacks.The poll found that Americans have become much more fearful of future attacks, with 67 percent believing they were "very likely" or "somewhat likely."The figure, which represents a 22 point spike since June, is the highest since early 2003, soon after the US invasion of Iraq. In the weeks after 9/11, fear of an imminent attack reached a high point of 85 percent.The San Bernardino attack, and a massacre in Paris last month that killed 130, have thrust the issue to the forefront of the race for the Republican presidential nomination and prompted President Barack Obama to outline his strategy in a televised address earlier this week."Confidence in the government's ability to keep them safe may not be as much a blaming of government ineptitude as it is a better understanding of the challenging nature of the threats now hiding within the US," Gallup said on its website.The husband and wife team suspected in the San Bernardino killings defied the image of typical attackers. Syed Rizwan Farook, a native American with a middle-class job, lived quietly with his Pakistani-born wife Tashfeen Malik and their infant daughter. Their militant leanings apparently went undetected by authorities until after their well-planned attack, police said.Concern over so-called "lone wolf" attacks has paralleled the rise of Islamic State over the past year. Experts say the movement has successfully used social media to attract recruits to its cause.The poll involved a random sample of 1,013 adults, interviewed by telephone. The margin of error is plus or minus 4 percentage points, with 95 percent confidence.